When I was at high school they teached me this formula $v = \omega × r$, it is the formula for knowing the linear velocity out of an angular velocity. But I've never understand why this works, even the teacher cannot show me why this works, I would have to trust him.

My question is, what is the scientific explanation of why this works?

And I don't know if this is silly, but not even the measuerement units concide. $v = \frac{m}s$, but the velocity obtained from this formula would be $v = \frac{rad × m}s$.

Why this formula works?

If the number of revolutions you traveled is n, then the length traveled is:

If you differentiate with respect to time to get velocity, you get:

$\frac{dn}{dt}$ is revolutions per second and $2\pi$ is the radians around a full circle.

This is simple enough you can completely skip the differentiation and do it intuitively. It should be obvious why:

Continuing on, then $2\pi\frac{dn}{dt}$ (or $2\pi \times revolutions.per.second$ if you prefer) is radians per second $\omega$.

As pointed out by others, a radian is not a unit. Radians is just a proportional (dimensionless) measure of the arc length around a circle relative to the circumference of ANY circle, of ANY size. Put another way, it is a proportional measure of how far you've gone around an entire circle anglewise or distance wise; same thing.

Start with the circumference of a circle $C = 2\pi r $

Let's say we need to make up a unit; a unit that represents some arc length around the circumference of a circle. It would be awfully convenient if it would be independent of the size of the circle so we should pick something that scales with the circle rather than a fixed number.

There's not many things to pick from: radius, diameter, circumference. Circumference makes no sense since we want a ratio proportional to the circumference which leaves either radius or diameter. Mathematicians in the past picked radius, but they could just have easily as chosen diameter.

So, let's find the ratio of the radius to the circumference of a circle:

That 1 in the numerator is the one radian, and $2 \pi$ in the denominator is the what it takes to get around the circumference. So really, a single radian represents one radius of arc length if you define $2 \pi$ as the circumference. Why do we define things this way? It helps keep the math clean.

I only learned what a radian really was until I had to learn Stearadians and realized that none of it made sense because I did not understand what a radian was.

Also the above is entirely analogous to the moment of inertia of particle with momentum $\vec{p}$ which is $$ \vec{L} = \vec{r} \times \vec{p} $$ where $\vec{r}$ is the location of the particle.

So what do all the above have in common? All of the above are a "moment of" calculation, with $\text{(moment)} = \vec{r} \times \text{(quantity)}$. There is velocity = moment of rotation, torque = moment of force and angular momentum = moment of momentum.

The significance of $\vec{r}\times$ is to result in the perpendicular distance to a line. Here is a graphical explanation of $\vec{v} = \vec{r} \times \vec{\omega}$ 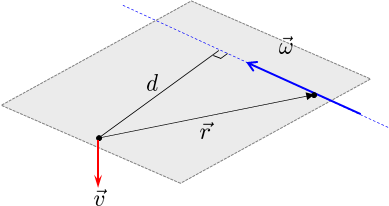 So you see the $\vec{r}\times$ results in accounting for the perpendicular distance to the axis of rotation.

You can verify for yourself that

$\vec v=\vec \omega\times \vec r$ is always valid , not only in circular motion

the line element is

where the components of $\vec r~$ are in body fixed coordinate system, and $S~$ is the rotation matrix.

where $S^T\,\vec v~$ are the components of the vector $v$ in body fixed coordinate system

Radians are not a proper unit, but more of a book-keeping device, so the units actually do work out. The math to prove this, at least in a way I find satisfying, it somewhat involved. So let's instead consider the example of a particle which is rotating around the $z$-axis with angular frequency $\omega$.

While this has only been a very specific example, this fact about the derivative of a rotation matrix being equal to some matrix times the original rotation is actually a generic property of rotations (which can be worked out by writing the rotations as exponentials of the generators of the Lie algebra of SO(3)).

Though the matrix that gets factored out is not always the one written above (in general it will depend on the angles you're rotating by), this fact about it being equivalent to a cross-product {\em is} generic and always occurs. This is the reason behind the formula $\boldsymbol{v}=\boldsymbol{\omega}\times\boldsymbol{r}$. (Again, please forgive any errant minus signs in the above).

There are other approaches to obtaining this same result which you may find online. These typically involve drawing some pictures.

The formula you listed is relevant when you have an object moving around a circle of radius $r$.

$\vec{\omega}$ is the amount of the circle that the object traverses in some period of time (normally radians/sec) and has a direction tangent to the plane that the circle lies in in 3D space. $\vec{r}$ is the vector that points from the origin of the circle to object on its outer edge.

The speed of the object is the amount of distance traveled over time, since $|\vec{\omega}|$ is the number of radians the object moves over time, we just need to multiply it by the radius of the circle to get arc length. Recall that the arc length along a circle is $s = r \theta$.

Not the answer you're looking for? Browse other questions tagged rotational-dynamics velocity angular-velocity or ask your own question.

1
Have I calculated Angular Acceleration correctly?
3
Circular motion, kinetic friction and tension
0
Is the wave phase of a sound wave always positive?
5
Terminal Velocity and Work
2
Difference between Kepler motion and uniform circular motion
1
Differece between torque $\tau$ and angular velocity $\omega$
1
Angular velocity and banking angle
0
How to fill the gap in this derivation of proper acceleration without four vectors?