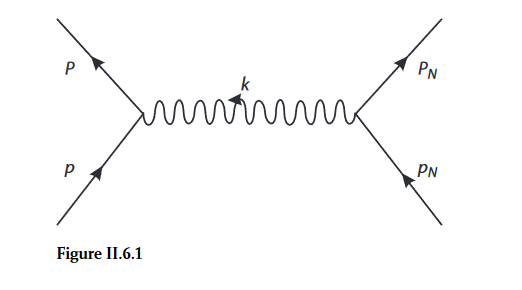 In Zee's QFT book, Section II.6, he gives the amplitude for this pictured process of an electron scattering from a structureless nucleon as

Here the subscript $N$ refers to the nucleon, $m_\gamma$ is a hypothetical photon mass that we will set to zero later and $k = P - p$. I use notation such that $\gamma_\mu=\eta_{\mu\nu}\gamma^\nu$. Zee says that since the mass of the nucleon is much greater than the electron mass, we can approximate the nucleon spinors are being in the rest frame. The Dirac equation in momentum space is

However, Zee says we also find that the rest frame condition gives

such that the stationary nucleon approximation of $\mathcal{M}$ is

I don't see where Zee gets $\bar u(P_N)\gamma^i u(p_N)=0$. It seems like the $\gamma^i u(p_N)$ terms disappear in the Dirac equation due to multiplication with $p_i=0$ and not because they have to vanish on their own. Where does it come from that

Not the answer you're looking for? Browse other questions tagged quantum-field-theory quantum-electrodynamics scattering dirac-equation or ask your own question.