How to choose the surface for the magnetic flux in case of an open circuit (Faraday Law)?

I have a doubt about a topic about which I did not found many informations.

Each time I've applied Faraday Law ($EMF = -\frac{d\phi(B)}{dt}$), such magnetic field crossed a loop conductor (for instance a coil). So, the surface that should be considered for the flux $\phi(B)$ computation was the area inside that loop.

In an open circuit, it's known that a time variation of magnetic field flux causes an induced voltage, but obviously not an induced current (let's think for instance at the secondary circuit of a transformer without a load).

But, in this situation, which surface should we consider to calculate the flux? Let's see some examples: 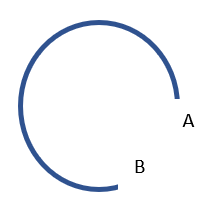 Which is the induced voltage $V_A-V_B$? Well, we may imagine to close that partial loop in several ways: with a straight line (first picture), with a circular arc (secondpicture), or with whatever you want strange curve (third picture): 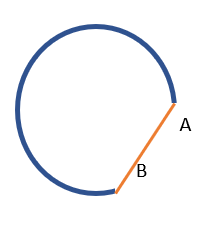 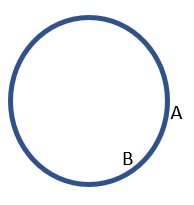 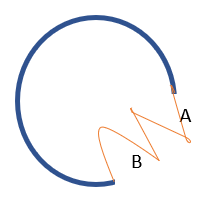 Obviously the enclosed area will be different, and so the induced voltage. But I'd say that, given a time - varying magnetic field, the induced voltage $V_A-V_B$ will have a unique definite value (or time - dependent expression). So, which is the surface that allows us to evaluate the EMF?

In those situation, those authors evaluated the magnetic flux $\phi(B)$ across a specific surface around the device (the wire, the dipole antenna etc), without explaining how can we decide the surface.

But if this statement is true, we should each time choose an infinite surface: all the space!

Let's think about a couple of straight wires used as an antenna (receiving dipole antennas).

An incident electromagnetic wave will induce voltage between its arms that represents the received signal. Well, how can we evaluate such a voltage if we don't know which surface should we consider?

Obviously the enclosed area will be different, and so the induced voltage.

But I'd say that, given a time - varying magnetic field, the induced voltage VA−VB will have a unique definite value (or time - dependent expression). So, which is the surface that allows us to evaluate the EMF?

The area will be different, but the "induced voltage" has nothing to do with these imaginary areas. Voltage between two such points is determined by response of the wire to induced EMF in the wire.

In other words, you are misunderstanding Faraday's law. It does not say anything directly about voltages; it only says change of magnetic flux through any closed loop will produce net EMF for that loop. Voltage between two points (=difference of the Coulomb electric potential) that may result in response to that EMF depends on other things, such as whether the circuit is closed or open, resistance of the wire. If resistance is zero, voltage between A and B will have the same magnitude as EMF from A to B; if resistance if very big, voltage will be much lower.

EMF for a piece of wire A to B is defined as integral of induced electric field from A to B. This integral has definite value at any time, but it can't be determined from Faraday's law alone; positions of points A and B are important. So (in general case) there is no point in completing the wire into a closed loop and calculating flux through that loop - the loop completion and magnetic flux is arbitrary, as you correctly observe. But EMF for the wire A to B isn't arbitrary, it has definite value

This cannot be determined using Faraday's law only; we have to measure induced electric field $\mathbf E_i$ at all points of the wire, or determine $\mathbf E_i$ by calculation from other known things.

However, there are special cases where this integral has the same value as loop EMF for some particular loop, and this can be used to calculate this integral; see below.

There are several situations (unfortunately with not simple explanations) in which I have seen the computation of the inductance of an open circuit. For instance, the inductance of the wire [...] if a there exists a time - varying magnetic field, there is some energy due to the fact that such a time - varying magnetic field flows across a surface [...] But if this statement is true, we should each time choose an infinite surface: all the space!

I do not understand why this topic is so ignored by all (at least, my) textbooks. I don't think it describes a so strange and unreal situation.

Calculating self-inductance is simple only in simple cases such as solenoidal or toroidal inductor. The relevant magnetic flux and closed loop are chosen in such a way that the loop passes at least partially through the wires/conductor boundaries so that the EMF for the loop is relevant to induced EMF in those conductors. It is hard to give general description, but in all valid cases the loop goes through conductors somewhere, and where it does not, it is very far away from the system (infinity) or has some symmetry so contributions there can cancel each other and so be ignored.

Let's think about a couple of straight wires used as an antenna (receiving dipole antennas). An incident electromagnetic wave will induce voltage between its arms that represents the received signal. Well, how can we evaluate such a voltage if we don't know which surface should we consider?

This self-inductance effect is related to Faraday's law: imagine any closed loop whose segment goes through the linear antenna (two rod-like conductors of non-zero thickness) but then turns right at 90 degree angle and continues to infinity on both sides of the antenna. There are infinity of such loops of different size and for each of them Faraday's law is valid. Different loop will have different change of magnetic flux and correspondingly different loop EMF. However due to geometry of the conductor, induced electric field everywhere will be nearly parallel to the antenna. So only the segment parallel and close with the antenna contributes appreciably to the loop EMF (the other parallel segment is very far away and induced field there is negligible). If we choose the loop in such a way that this segment ends where the antenna conductor ends, then loop EMF has the same value as the sought EMF for the antenna segment. We can calculate the loop EMF using Faraday's law for the infinite loop and this is approximately giving EMF for the antenna.

In the limit of zero resistance, this EMF has the same value as voltage. In reality, voltage is weaker, as some electric field has to be left in the conductor to drive the motion of mobile charges.

Not the answer you're looking for? Browse other questions tagged electromagnetism electromagnetic-radiation magnetic-fields maxwell-equations or ask your own question.