Since, magnetic field is a vector quantity, two (or more) magnetic fields (when in close proximity) should influence their fields, according to the laws of vector. And by that logic, Ampere's circuital law shouldn't work. Here's how- 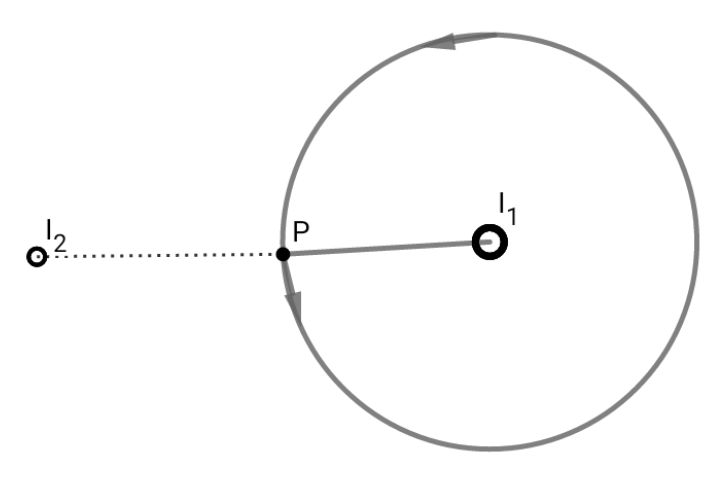 And if all the above mentioned doesn't make my point clear, then consider this. 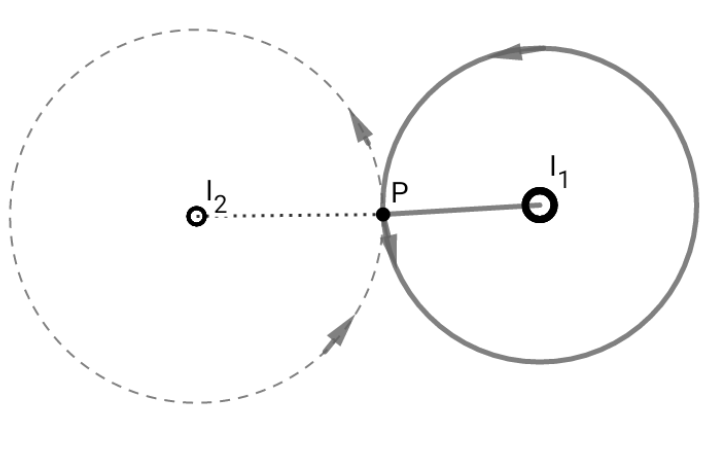 And now draw another amperian loop around $I_2$ through $P$. Then again by Ampere's law,

Now, how in the world is it possible that, at a unique point in space,we have two different values of magnetic field? It doesn't add up.

And I suppose so goes with, Gauss's law. Consider below, 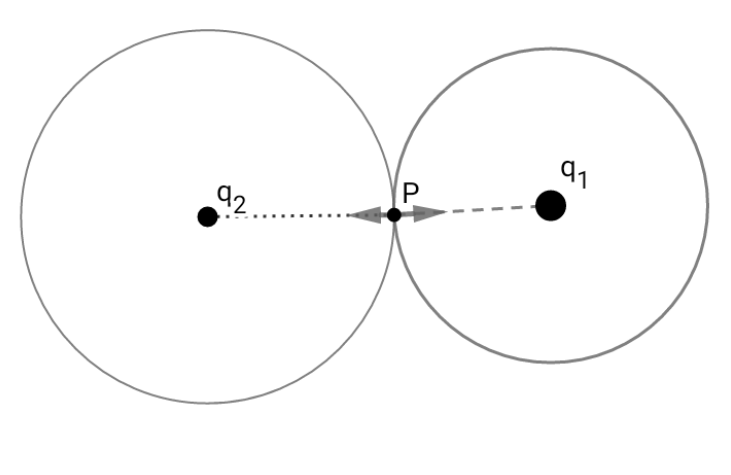 Again same argument,$E_1$ and $E_2$ are not equal, which actually should be.

You are right, $\mathbf{B}$ is a vectorial quantity. Furthermore, it depends on position $\mathbf{r}$. Therefore we need to write $\mathbf{B}(\mathbf{r})$.

The magnetic field around two current-carrying wires (with the currents flowing in the same direction) looks like this: 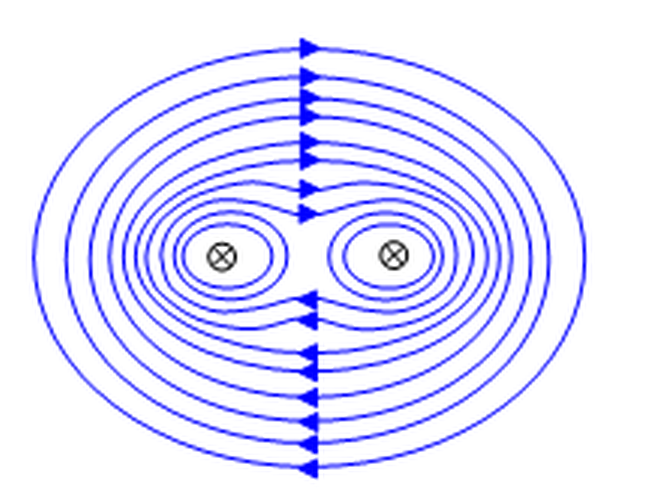 Notice especially, how the magnetic field in the region between the two wires is very small, because the magnetic contributions from the left and the right wire nearly cancel each other there.

Now consider a loop around the right wire only. 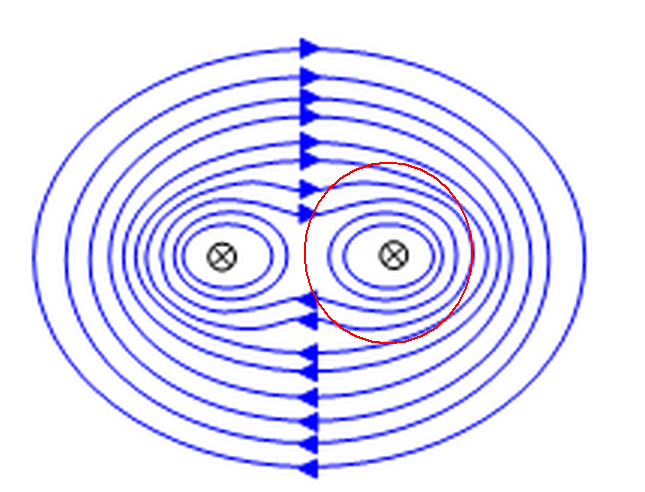 That is why we cannot simply pull the $\mathbf{B}$ out of the integral and write $$B\oint_\text{right loop} dl.$$

But nevertheless the equation $$\oint_\text{right loop} \mathbf{B}(\mathbf{r})\cdot d\mathbf{r}=\mu_0 I_\text{right}$$ is still true. The total path integral depends only on the current enclosed by the loop.

I'll just consider your first example; resolving this is sufficient to explain your other examples. Your error is that $\oint \vec{B} \cdot d\vec{r} \neq \vec{B} \oint d\vec{r}$. The field due to current $I_2$ is not constant over the Amperian loop you have drawn. However, the line integral of the magnetic field due to $I_2$ over the loop is zero (due to Ampere's law).

This isn't a valid inference.

When this inference is made in the textbook derivation of the B field around a long wire, we use the symmetry of system (the system is radially symmetric around the axis of the wire) to derive the conclusion from Ampere's Law.

In your scenario with a second wire, there is no such symmetry, so we can't make this conclusion.

We can, as other answers have pointed out, use this result to find the contribution to the B field from each wire, and then use the superposition principle to sum the contributions from all the wires and get the total B field at each point.

It is going to be much easier for you if you take $I_1=0$, that is, form your “Amperian loop” or “Gaussian pillbox” in the vicinity of a current or charge, but not actually containing any. You are claiming that then your argument should make the fields identically zero on the loop/surface.

As folks are pointing out, it doesn’t. To see this, it really helps to use polar coordinates centered on $I_2$, so your loop consists of one arc of wire along the circle at radius $r_1$, a straight radial wire from $r_1$ to $r_2$, another arc of wire at $r_2$ subtending the same angle $\theta$ as the original, and another straight radial wire from $r_2$ back to $r_1$.

But as you have seen, $B\propto 1/r$ and this is indeed satisfied.

In fact, we would say that there are these two fields that have curl zero and divergence zero, everywhere except one line/point where it is infinite with a bounded integral. In spherical coordinates, where $\theta\in[0,2\pi)$ is azimuthal/longitude and $\phi\in[0,\pi]$ is polar/latitude, these are $\hat theta/(r\sin\phi)$ and $\hat r/r^2$. Because they have these derivatives as zero outside of this line/point, the loops and pillboxes that do not contain this point integrate to zero always, while the ones that do contain the point integrate to non-zero values. So even though $\hat r/r^2$ seems to “diverge” it is important to understand that it is not actually having a non-zero divergence anywhere except that one point, similarly even though $\hat theta/(r\sin\phi)$ seems to “curl” about the line, it does not in fact have a non-zero curl anywhere except that one line.

Another way to put all this is an analogy to fluid flow fields, imagine $E,B$ as a velocity field $v$ for some fluid. If you had a flow field corresponding to these vector equations, $\hat r/r^2$ would describe a flow where fluid is being somehow injected into this single point at the origin and squirting outwards continuously out to infinity in a spherically symmetric fashion. Now, there are other non-trivial fields with zero divergence which you can understand as flows that come out of infinity and then go back into infinity, as well: and to say that this is somehow the “only basic” force law, that “everything is Coulomb” (just with translations, scaling, superpositions, etc.) requires imposing a boundary condition that the fields decay to zero off at infinity to rule out all of these other flows. Anyway, in this fluid flow analogy, zero curl now means that if you put a little pinwheel into the fluid, it would not be torqued and so it would not be spinning if it has some internal friction. So even though this other flow really appears to “curl” about the axis with its $\hat\theta$ component, the radial decay of the field is just enough that the torque on the outer edge of the pinwheel perfectly balances the torque on the inner edge of the pinwheel and the pinwheel does not spin, unless you get it right on that center point.

You are right that the magnetic fields add up as vectors at any point in space. You missunderstood the meaning of Ampere's law though. The line integral of B is exactly what you suggest: the integral of all the resultant field, produced by all the currents, no matter if they are inside or outside the loop. The nice thing expressed by Ampere's law is that tis integral depends only on the currents inside the loop. In other words, this tells you that the loop integral of fields produced by currents outside the loops is zero. But pay attention to the difference: not the fields of these external conductors are zero, their integral over a closed loop is zero. With these clarification, I hope you can see the error in your examples with the two circular loops having currents in their centers. You assume that the loop integral is some constant B times the perimeter of the circle. But in this case B is not constant around the loop, as it has two components, from the two currents. The cylindrical symmetry does not work anymore. You cannot even use Ampere's law to find the field in this situation. Ampere's law only tells you the values of the loop integral. But you cannot find B just from the value of the loop integral. With the exception of cases when B is constant around the loop. Which you don't have here. So applying Ampere's law for the two loops will provide two values for the two loop integrals. That's all. Noting about B at a gien point (including your point P). I suppose the missunderstanding comes from the fact that in classrooms the focus is on the symmetrical examples where Ampere's law can be used to find the field. We are trying to show the students that the law is "useful".

Your confusion stems from the derivation of the magnetic field from amperes law.

Amperes law says the line integral of b.dl is only due to the enclosed current * $\mu_0$

THIS IS TRUE FOR ANY PATH, and ANY open surface attached to that path . It doesn't have to be a circle. Nor does the surface have to be a flat surface. It could be a e.g bag shape.

the derivation of the B field from amperes law is as follows.

now, Let's pick out gaussian ring to be a circle centered the origin of radius r

Along that SPECIFIC ring

because there is a single point of curl, going e.g out of the page. the magnetic field is in the same direction as the dl element of my chosen circular ring. ( if you understand what curl is, you'd know that in this PARTICULAR circumstance, where there is a line of curl pointing in the same direction. The B field MUST make concentric circles around the point of curl.

And then for my chosen gaussian ring this reduces to

Note, this is the $|\vec{B}|$ field for points on my CHOSEN gaussian ring. the same procedure can be done for a ring that is e.g a little further down the wire and you'd get the same result meaning this formula applies for all R distance away from the current

in the derivation we have assumed that the B field makes concentric circles around the point of curl such that B is in the direction of dl, we have also made the assumption that the B field is constant along that path

for 2 currents , the magnetic field definitely does NOT make concentric circles around our chosen gaussian ring. NOR is the B field constant around that path. Meaning the same procedure would be invalid for the case with 2 currents.

It has been a while since I thought about this, but I think Ampere's law, as used above, is used to acquire the magnetic field caused by the source current - the current enclosed. So, it then does not identify the total magnetic field in a region but only the magnetic field due to a current distribution in that region.

Not the answer you're looking for? Browse other questions tagged electromagnetism electrostatics magnetic-fields electricity electromagnetic-induction or ask your own question.

1
Why is the curl of magnetic field $0$ outside the conductor and non-zero inside?

3
Understanding the Ampere's Law
2
Using Ampere's Law for a Solenoid
3
Doubt regarding Ampere's Circuital Law
1
Finding the force between parallel currents using the formula of magnetic pressure
0
Ampere's law paradox
1
Reason behind the inclusion and exclusion of current sources while using Ampere's law for the total magnetic field and total current
0
What type of integrals are these?
4
Why isn't electric field due to outside charges taken into account when calculating the "total" field in some Gauss law problems?
0
Ampere's law, definition of enclosed current