Dimples are used on golf balls to promote the formation of a turbulent boundary layer that stays with the ball longer as it travels through the air, therefore greatly decreasing the pressure drag experienced by the ball. The increased skin friction drag created by the dimples on the ball's surface is very small compared to the pressure drag reduction that it benefits from; therefore, the overall drag decreases as a result of the dimples. This is useful because a golf ball needs to travel far distances with a potentially large amount of air resistance. Conversely, an airplane does not need dimples on its wings or body because it is already aerodynamic in shape (instead of blunt-faced like the golf ball) and therefore the pressure drag is already reduced such that adding dimples would actually increase the skin friction more than it would decrease the pressure drag, and the overall drag on the airplane would likely increase as a result.

My question is, based on this knowledge, would ping pong balls travel faster as a result of adding dimples? Would they benefit from dimples at all? They have a similar size and shape but much smaller mass than golf balls, which is where my uncertainty comes from.

You are mostly correct that the dimples on a golf ball reduce its drag by promoting transition from laminar to turbulent flow, which reduces the size of the separated wake behind the ball. But that doesn't mean that a different ball would benefit in a similar way.

The Reynolds number (Density * Speed * Diameter / Viscosity) has to be within a certain range for the benefit to occur. At smaller values, the dimples (or other roughness) wouldn't be enough of a disturbance to cause transition, and at higher values the flow would be turbulent without them.

To see whether ping pong balls would benefit from dimples, we need to compare their speeds and diameters with those of golf balls. A quick Internet search found that golf balls travel at something like 80.5 m/s and have a diameter of about 42.6mm, whereas the numbers for ping pong balls are about 30 m/s and 40mm. Comparing the Reynolds numbers gives about 240,000 for a golf ball and 80,000 for a ping pong ball.

The figure below (taken from Fluid Dynamic Drag by S. Hoerner) plots experimental drag measurements for spheres as functions of Reynolds number, and shows a dramatic change in shape at Reynolds numbers in the transitional region between 100,000 and 1,000,000.

The next figure (from the same source) zooms in more closely to our region of interest, and shows that the ping pong ball's Reynolds number of about 80,000 is just below the beginning of the transitional region, thus indicating that it would not be likely to benefit from adding dimples. 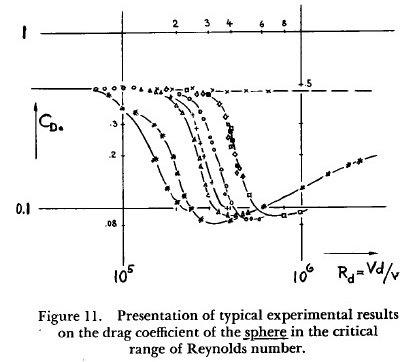 The main difference is that a ping-pong ball travels a much shorter distance over a much shorter time. Initial velocity is a function only of its mass and the bat's hitting power. At the end of its very short flight of a second or less, its final velocity is not a major factor and it does not have time to slow down significantly enough to matter.

Spin probably also comes in to it, but I don't know enough about golf to comment.

Not the answer you're looking for? Browse other questions tagged fluid-dynamics pressure projectile drag aerodynamics or ask your own question.

9
Ping-pong ball pontoon
19
Why aren't airplanes like golf balls?
3
Do rotating non-circular projectiles also experience Magnus lift?
1
Do dimples reduce laminar drag across a surface?
1
Does air with zero viscosity has effect on the motion of a top-spin ping-pong ball?
1
Reducing the Aerodynamic loss of a Flywheel in Air
0
Is there a name of the reactionary force to the pressure drag due to flow separation?
4
Why can you in physics exercises neglect the effect of air drag in case of basketball but not in the case of ping pong ball?