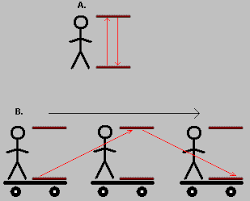 in the time dilation formula, I know that $t$ is the time measured by the stationary observer between 2 events. However, is $t'$:

I feel like although the moving observer sees the light travel a greater distance at the same speed, the time interval between each tick of his clock is also increased by the same factor so the time intervals measured by each observer must be same and $t'$ should be $2$.

In the derivation of dilation formula, one usually takes time $t$ to be the time as measured by the observer B in your picture. This is the time of one tick of B's clocks in the rest frame of the clock.

Then you look at the same two events that demarcate the tick on B's clocks from the A's perspective. The A sees that between the two events $t'$ of time elapsed. So $t'$ is the time of one tick of B's clocks in the A's frame.

So if you know that one tick of B's clock took $t$ in B's frame, the dilation formula tells you for A the elapsed time of this tick is $t'=\gamma t.$

For the stationary observer the travelled distance is longer, $d$, than for the moving observer, $d'$. But the speed of light is same, $c$, for both. With a different observed distance but same speed the observed time must be different as well to justify the formula of $\text{speed}=\frac{\text{distance}}{\text{time}}$:

is correct, yes, whereas

would be no different than $t$ because this is measured by the stationary observer.

Not the answer you're looking for? Browse other questions tagged special-relativity inertial-frames time-dilation observers or ask your own question.