Why did the apple explode when spun very fast?

This new video from the slow-mo guys captures the explosion of an apple when it is rotated really fast (roughly $109$ rotations per second).

But can someone explain me why did it explode? Can we explain this on the basis of centrifugal force (from the apple's frame)? If yes, what would be the cause from an inertial frame?

Let's think of a simplified system: two point masses connected by a massless string. As the masses circle around the center of the string, the string provides the centripetal force required to make the masses turn in a circle. We can find the tension by using Newton's second law. Ignoring gravity, we recognize that the tension is the only force acting on each mass, and the acceleration is centripetal acceleration.

A real string will eventually break if the tension gets too great. If it spins too fast (big $\omega$), then the string breaks.

From the point of view of an inertial frame the tension is required to change the direction of the masses velocity. The acceleration turns the masses in a circle.

Using a co-rotating frame, the the tension is balanced by the centrifugal pseudo-force.

First, the apple appears to break into 3 parts, not two. Second, the break is obviously not as "clean as a knife" if you slow the video down and watch it carefully. However, the break is much cleaner than if you tried to tear the apple into chunks with your bare hands (unless you happen to be Edward Scissorhands, of course). Apples in general are not designed for high tension, as there is no biological motivation for such a property. On the contrary, apples are basically designed to be consumed by animals, to help propagate the seeds. That is why they have relatively soft flesh on the outside, unlike most nuts.

The other answers have explained why the apple falls apart, so I will try to give an idea for why it breaks into three pieces the way it does. If you look carefully at an intact apple, you will notice that it has a rough radial symmetry about the axis going through the stem. If you study the bottom, in particular, you will notice that quite often, there is a 5-fold symmetry. On top of that, the average apple contains 5-8 seeds. Perhaps you are noticing a pattern here. Biology tends to be very economical (because that is rewarded, and extravagance is penalized with extinction), so many "body plans" look like: "make this widget, and duplicate it N times". For an apple, that appears to be something like: "make this ear-shaped slice and put a seed near the middle, and do that five times in a circle". Of course, it doesn't make the apple fully formed in that shape, but rather starts out growing around the seeds themselves.

When the apple finally breaks, we are then left with the question: "Why does it break where it does?" And as with all mechanical systems, the answer is generally: "That's where the weakest points were." So where are the "weak points" on an apple? Going back to the bottom of the apple, we infer the 5-fold symmetry because of the "bumps" on the bottom, which can range from quite prominent to barely noticeable, if at all. You can imagine that the larger mass/internal surface area near the "peak" of one such bump has higher tensile strength (ability to resist being pulled apart), and that there is a correspondingly lower tensile strength in the "valleys" between the bumps. I would predict that the valleys are thus where the apple is most likely to break. And this also explains why it breaks into 3 pieces, and why the pieces are not the same size. Breaking roughly in half would be the simplest way to release tension force in the apple, but the symmetry makes a clean half-break less likely. Instead, it appears that the apple breaks into more like 2:2:1 fragments. It's not precise, because there isn't a clean division between the "lobes" of the apple.

Given these observations, I would expect that were this experiment to be replicated on an orange, that the orange might be more likely to split cleanly in half, given that oranges typically have 10 sections. In addition, the lobes of an orange are quite distinct, resulting in fairly inhomogeneous internal forces upon rotation. On the other hand, I would not be surprised if large-scale (but subtle to the eye) variations in the shape of the orange caused it to split asymmetrically like the apple, but still along the 10-fold symmetry lines.

Breaking into parts is due to the structure of the apple, which I can't elaborate on because I'm not an apple biologist, but it might be illuminating to think of what would happen in a simpler case. If the object spinning is elastically deformable (think of a bouncy ball or a stress ball, if you know what that is) then, as explained in the other answers, it will stretch out in the plane perpendicular to the axis of rotation because you can effectively replace the string described by Paul T. with a spring. As the tension force increases, the spring stretches, and the non-rigid ball deforms in a similar way: 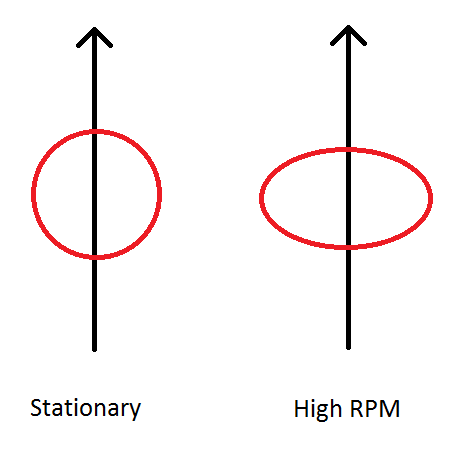 Eventually as the RPM increases, these forces cannot hold the object together any more and it breaks apart in a manner determined by the structure of the object (whether it's more rigid or more fluid-like) and the types of forces holding it together.

This effect is observable in many places throughout the universe: it is why the earth is wider around the equator than around the poles, why some fast-spinning stars are even more deformed, why many galaxies tend to form flat-ish discs, and why the planets of the solar system lie roughly in a plane.

Not the answer you're looking for? Browse other questions tagged newtonian-mechanics forces rotational-dynamics everyday-life explosions or ask your own question.

72
Why is the Earth so fat?
2
Spring rotated in uniform circular motion
1
Why does a fan blade appear to spin backwards when spun really fast?
1
Rolling ball travelling in tube with loop vs straight tube
13
How and why would a glass table break in this manner?
0
Fictitious Forces in a car crash
3
Does the centrifugal force exist in inertial frames too?
6
How do observers in inertial frames explain fictitious forces?