How can we know the velocity curve past the cut-off radius of visible matter in a galaxy?

I am trying to understand a typical explanation for the need of a dark matter halo in galaxies. The rotational velocity of stars around the centre of a galaxy seems to be constant past a certain radius. Assuming we can use

where $M(r)$ is the mass of the galaxy enclosed within radius $r$, we seem to need $M(r)\propto r$ for the velocity to be constant. Assuming we can use $M(r)=\frac{4}{3}\pi r^3\rho(r)$, this requires $\rho(r) \propto 1/r^2$. Below is an image of the surface density profile of galaxy NGC 3198. Let's say the volume density profile looks similar and it can be modelled as $1/r^2$. This would make the constant velocity behaviour plausible without the need for dark matter. 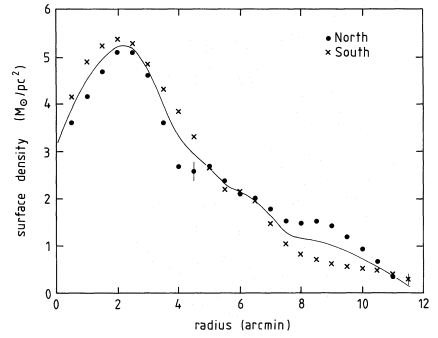 My question is, how can we know that the velocity curve is still constant for $r>R_{\textrm{visible}}$ if we cannot detect anything coming from such outer region?

Indeed this can be confusing at first. The velocity curve is measured using various tracer objects, stars and hydrogen clouds being the most obvious ones. Hydrogen clouds can be found way beyond where stars shine. As a concrete (and pretty) example I slightly modified Figure 3 from this paper: 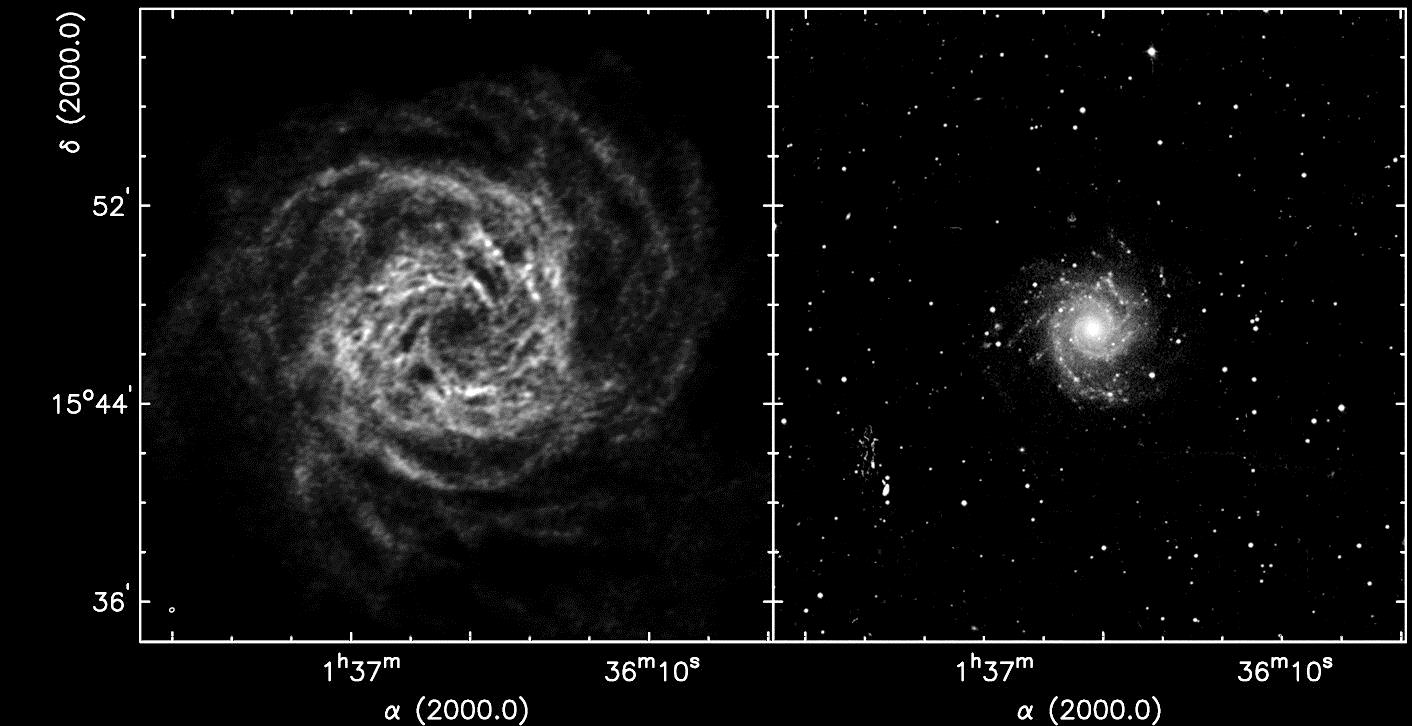 This is the galaxy Messier 74. On the left you see the integrated hydrogen (HI) map from the THINGS survey. On the right is, at the same scale, the optical image from the DSS survey. Clearly, what we see with stars is just a small part of the galaxy.

Your calculation gives a good first estimate what to expect, but is only correct for a spherically symmetric distribution. In contrast, we observe both the stars as well as the hydrogen clouds to be limited to a relatively thin disk. Thus neither stars nor hydrogen clouds can explain the observed flat rotation curve.

BTW, indeed a simple $M(r)\propto r$ gives the right constant rotation speed, as is seen from your first equation. This is the mass distribution of an isothermal halo. Such a distribution is consistent with what you would expect e.g. from simulations of structure formation. Taken together, it is yet another consistent piece in the puzzle of dark matter evidence.

Clearly a rotation curve cannot be measured beyond the point at which no visible matter can be seen.

Rotation velocity measurements can come from clouds of hydrogen gas, distant planetary nebulae or globular clusters and satellite galaxies. These objects are scarce enough that they make a negligible contribution to the Galactic mass.

The velocity in a Keplerian disc, which might be the appropriate model for a disc galaxy, does not depend on radius as $v \propto r^{-1/2}$, since that assumes a spherically symmetric mass distribution. Thus if you want to avoid dark matter (you can't, with Newtonian gravity) then you should begin by comparing with a self-consistent model of the velocity field according to the visible mass distribution.

Not the answer you're looking for? Browse other questions tagged astrophysics dark-matter galaxies galaxy-rotation-curve or ask your own question.

9
How does dark matter halo outside a galaxy help to explain galaxy rotation curve?
6
Experimental Data for Mass Distribution of a Galaxy
1
Dark matter halo distribution for simple galaxy model
14
Is Dark Matter in Motion?