So there are 6 quarks, what are anti-quarks considered then?

I just recently got into particle physics and the quantum world and I love it.

So my first big question is. I watch all these videos and people explain the quarks (up, down, top, bottom, strange, charm). And they all say there are 6 quarks. But every so often someone speaks of an anti-quark. What is this anti-quark if there are only 6 quarks? Is it anti-matter? Is it still a quark? (if so that means there are 12 quarks?)

Because the 6 antiquark flavors – anti-up, anti-down etc. – have the same properties as the quarks (up to the opposite signs), they're not counted as "independent types of elementary particles". Quite generally, we don't consider antiparticle species to be "independent species" because it's a completely general fact that every particle type has an antiparticle (although, in some cases such as the photon, Z-boson, or Higgs boson, they coincide with the original particle).

No one would ever say that there are "12 types of quarks" because of the antiquarks. We either consider antiquarks "not to be quarks" when we talk about "quarks" in a strict sense, or we do include antiquarks among quarks but the antiparticles are considered to be pretty much the same thing as the original quarks (despite the sign flip in all quantum numbers) which is why we still have just 6 quark flavors (the types are called flavors; each of them also has 3 colors and 2 spin polarizations).

Leptons are not composed of quarks. Leptons and quarks are two equally large but mutually disjoint sets of elementary particles – leptons plus quarks are known as "elementary fermions".

The four forces are mediated by the photons (electromagnetic), W-bosons and Z-bosons (weak nuclear force), gluons (strong force), and gravitons (the gravitational force). Physics is pretty much equally sure about all four or five of them. The only way in which gravitons differ is that gravity is such an extremely weak force that individual gravitons are pretty much undetectable. But they're detectable if they're coming in sufficiently strong beams or packages – gravitational waves – and the 1993 physics Nobel prize was given out for the evidence that gravitational waves existed exactly as predicted by Einstein's general theory of relativity.

The Higgs boson is a boson (i.e. not fermion) but it's the only boson in the list that doesn't mediate a fundamental force. It's still very important in the scheme of the Universe because it guarantees that W-bosons, Z-bosons, (charged) leptons, and quarks are massive – via the Higgs/BEH mechanism. The Higgs boson was discovered last July. 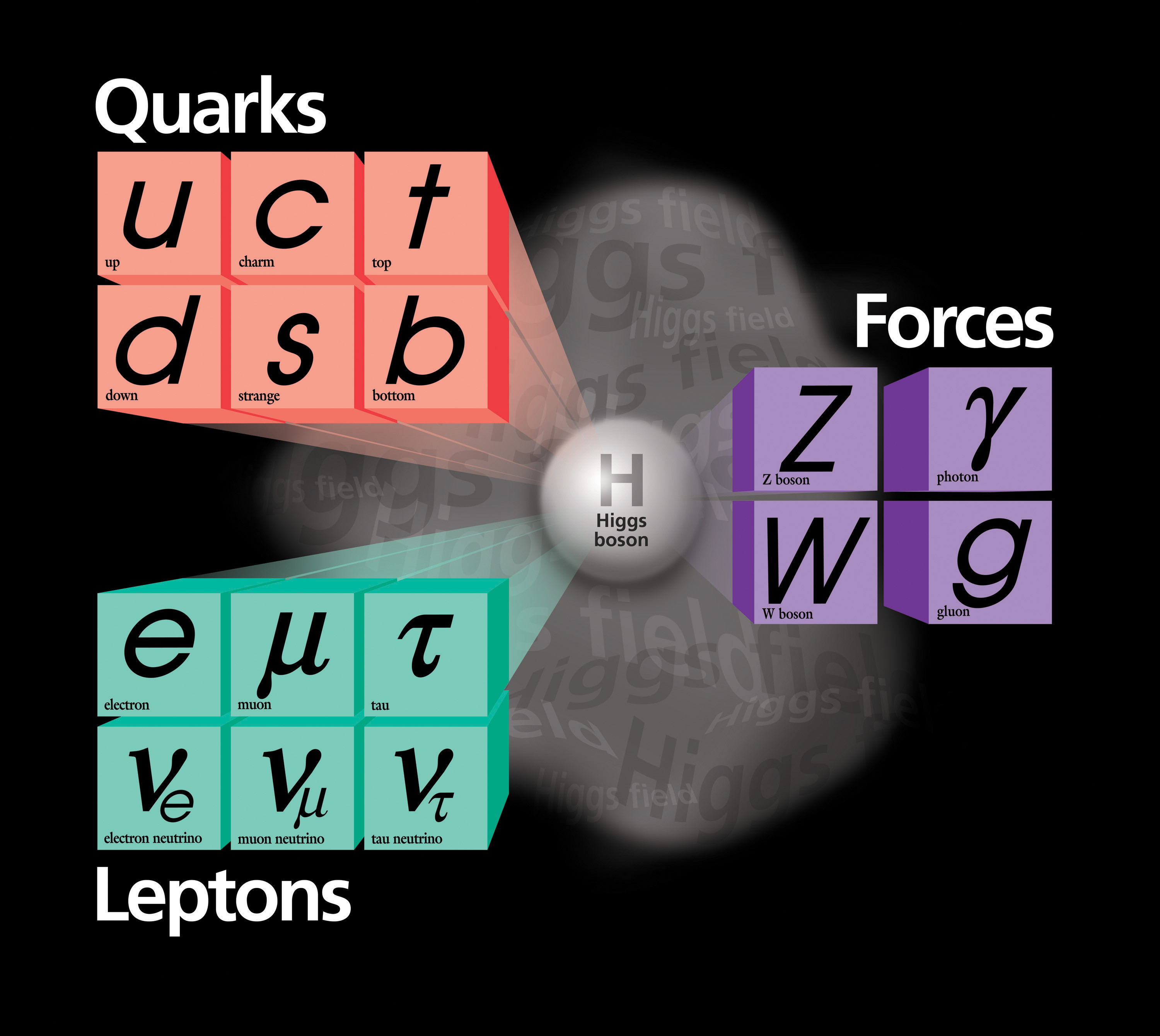 Quarks differ by their carrying a color - interacting via the strong force (one mediated by gluons and described by QCD). Leptons don't carry any color so they don't interact by the strong force – which is the reason why their name, "leptons", is related to words like "skinny" in Greek.

Just as an add to Lubos Motl's answer:

If you want to know why gravity gets weaker as it travels through the dimensions, see this question that I asked a while ago:

Why does the force of gravity get weaker as it travels through the dimensions?

Not the answer you're looking for? Browse other questions tagged particle-physics terminology standard-model antimatter quarks or ask your own question.

75
Why do we think there are only three generations of fundamental particles?
0
Does the existence of particles with an electric charge that varies from 0 to 4/3 proof that more elementary particles with charge 1/3 or 0 exist?
1
A question on the strong interaction and charm number
6
Why are there no composite particles with fractional charges?