Can the Sun orbit the Earth?

You know how the earth orbits the sun because of gravity?...well if the sun were the right distance from the earth and it had the perfect tangential velocity...could it orbit the earth?

The Sun and Earth attract each other because of gravity. Without that, they would fly apart. Gravity holds them together as they circle.

Something else like that would be two people holding on to a rope. They can spin around in circles, held together by the rope.

Suppose the people had equal mass. In that case, they both spin around the center of the rope. They orbit each other.

Suppose one is bigger than the other. The big person doesn't move as much as the little person. But they both move in a circle. The big person moves in a smaller circle.

Suppose one person is Santa Claus and the other is a very small elf. Santa would move in a very small circle, so small that it might look as if he wasn't moving at all.

The Sun and Earth are like that, only more so. A giant boulder tied to a grain of sand. Still they orbit each other. The Sun moves a tiny amount, but it does move.

So the reason the Sun is at the center is because it is so much bigger than the planets.

The two-body problem is to predict the motion of two massive objects which are abstractly viewed as point particles that the two objects interact only with one another. In general two planets orbit around the center of mass of the system.

To calculate the actual motion of the Sun, only the motions of the four giant planets (Jupiter, Saturn, Uranus, Neptune) need to be considered. The contributions of all other planets, dwarf planets, etc. are negligible. If the four giant planets were on a straight line on the same side of the Sun, the combined center of mass would lie about 1.17 solar radii or just over 810,000 km above the Sun's surface which is in approximate case negligible.

Path of Earth and Moon around sun

To a mathematician, it is only a matter of how you choose your coordinate system. You can let the sun orbit the earth, but the physics make heliocentric easier.

as sun is very heavy so the centre of mass of sun, earth system is very close to the sun. :) It rotates but very unobservable.(but just for fun a fact that our solar system also revolves about the centre of Milky way) 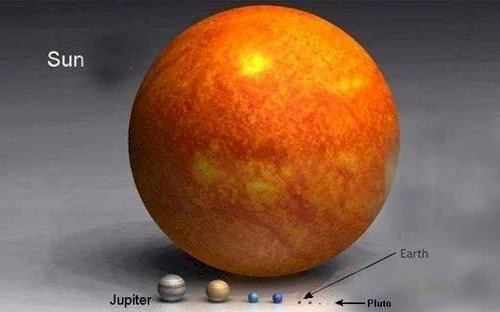 5
What is the reasoning behind the Hill Sphere?
1
Sun and planets orbit each other
10
Do the planets really orbit the Sun?
0
Why Sun is not able to attract mercury closer?
0
If Earth orbit around the sun was closer would it change the shape of its orbit into a dented 104 node ellipse?
0
Why the Moon does not change its orbit from Earth to an another planet?
3
Since the Earth orbits the Galaxy, why doesn't it "fly away" from astronauts?
0
Does the Earth orbit an ellipse or the barycentre of the Solar system?
0
How does the Sun's gravity affect the shape of the orbit of the Moon around the Earth?
0
Are there any moons that exhibit a non-convex curvature in their orbit about the Sun?