I was watching a video of object's motion on an inclined plane on Khan Academy. https://youtu.be/Mz2nDXElcoM

The video describes the motion of an ice block on an inclined ice plane (meaning that the plane is frictionless). Keep in mind that I assume that I won't know what the motion of the ice block will be.

I know that the weight force of the ice block can be broken down into the x and y component. Here's the problem:

In the video, Sal Khan, the teacher, said that the block will not move along the y direction. Therefore, the normal force will be equal in magnitude to the y component of weight force, $N=mg\cos\theta$

Whatever we read in physics are completely based on observations. First we observe something happening and then formulate laws which suits the observation. It is not the other way that we first make laws and then try to observe the law in action.

So coming back to your question, I think you should try repeating that experiment. Check what you observe. Of course , you will notice that the block doesn't fly off the wedge of its own. Now since we noticed this , we should try to formulate laws.

It is a common observation also that a block moves only when there is a net push or pull on it. So we can conclude that we need something to move a block at rest. This is what physicist call a force. So if something is at rest, then we can use our formulated law and conclude that the net force on that block is zero.

In the same way we can say that the ice in the video has no net force in the perpendicular direction on the basis of observation and thus normal force equals the component of the weight.

Edit : it is almost impossible to independently calculate the magnitude of the normal force. Since it not only depends on Coulomb's law. Also we need many factors like the number of foreign atoms between the two surfaces in contact, the type of foreign atoms, their charge and many other things. So we generally ignore them and on the basis of observation, we conclude that it's total magnitude is equal to weight.

Can't the normal force be bigger than it so that the ice block will accelerate upwards? Is it an assumption or it's a natural phenomenon and property of normal force? Can it even be proved?

It's like having an object of mass $m$ rest on a table. The table, assuming it is strong enough, will provide enough normal force, i.e. $N=mg$, to prevent the object from 'falling through' the table. So there's no motion in the vertical, downward direction.

However, $N=mg$ is the maximum force the table can provide.

It cannot provide a normal force:

which would cause upward motion of the object. $N$ is a reactive force which at best equals $mg$, it cannot exceed it.

It's basically the same for a mass $m$ on an incline (with angle $\alpha$), regardless even of friction: 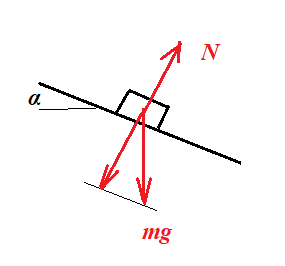 The incline's surface needs to provide a reactive, Normal force $N$ to prevent the mass for crashing through the surface:

The force analysis doesn't require anything from the motion, we take to analyze the forces(causes of motion) at a point and predict future motion. The component of forces in the direction normal to the ramp must be zero, otherwise, it'd mean 'in the future', the block will 'jump' for the incline or 'depress' into the incline. Since the first possibility is not something physical and we assumed that the incline doesn't change shape, the total normal is zero. (How does it move into the incline without changing its shape??)

Here we are doing the force components in directions parallel and perpendicular to the plane.