A person is standing on a weighing scale in an elevator in upward acceleration.

Let $N$ be normal reaction force exerted by the weighing scale to the person (upward).

Just don't start writing equations without a complete Free-Body-Diagram(may be rough diagram) according to the frame of reference.. 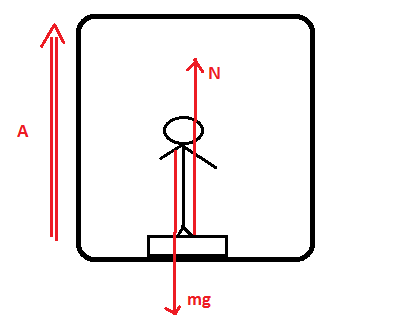 Here we equate the net external force to the acceleration of body . $ma$ is not a force it is the measure of net force which causes body to accelerate.

here we have to add a fictious force $-m\vec{a}$ where $\vec a$ is the acceleration of frame . 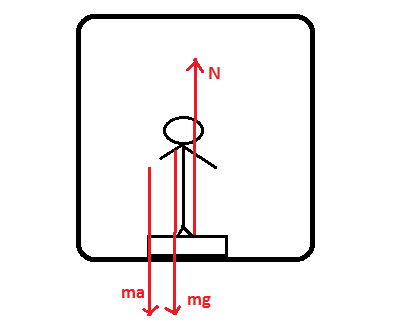 As to where the $ma$ component come from: The actual physical cause of normal forces are typically not given much thought in this type of calculations. Normal forces are introduced to uphold certain mechanical constraints that are assumed to hold. In this case, the constraints are that the elevator, the scale and the person should all remain intact, maintain their relative position to each other and move with the same speed and acceleration. We simply calculate the normal forces that must be present for this to occur. If the person and the scale could not exert this normal force on each other, our constraints would not hold. (The scale or the person would break or deform and at least for a while they would not travel with the same velocity and/or acceleration).

As to the physical cause of normal forces, I can rcommend reading some of the answers to this question.

Not the answer you're looking for? Browse other questions tagged newtonian-mechanics forces acceleration or ask your own question.

3
Trouble understanding the concept of true and apparent weight
-2
How to calculate the weight in en elevator going upwards / downwards?

0
Forces exerted on a body inside an accelerating elevator
3
Newton's third law of motion: An apple resting on the surface of earth
1
The normal force in an elevator that's accelerating
0
If a person and a weighing scale are being pulled in opposite direction by the same force, is their rest frame inertial or not?
1
How does normal force work?
2
Feeling heavy in an upward accelerating elevator - is it a pseudo force?
0
Why is there a downward apparent force on an object accelerating upwards in an elevator?
0
If there is an upward normal net force when an elevator is going up, then shouldn't I be floating as an impact of the upward force?