Exactly what is the cause for the zero reactance seen in the impedance at the center feed point of a resonant half wave dipole?

Lots of explanations i've read on the internet written by ham radio operators and in some text books state that a half wave dipole is resonant when the inductive and capacitive reactances cancel out. This has never made sense to me and all those people couldn't possibly be wrong, so i did some reading, and it does in fact seem that the idea of reactances cancelling at resonance for a half wave dipole isn't accurate.

Can anyone elaborate on this ?

My reasoning which follows assumes a center series fed ideal half wave dipole in free space when used for transmitting.

The image below shows the well known voltage and resultant current distribution for the standing wave which exists on a half wave dipole when an RF waveform is applied at the center feed point. This image shows that the applied voltage is in phase with the current of the standing wave.

It's common knowledge that a standing wave results from the addition of the applied incident RF energy at the center feed point to that reflected from the open circuit ends of the antenna. The standing wave represents the actual conditions on the antenna and results directly in the issuance of EMF energy into space.

Edit by Andrew : This correctness of this paragraph is dubious.

The standing wave is a common mode wave. This means that at any instant the same current flows through both halves of the antenna in the same direction. This is in contrast to the conditions on a transmission line where the desired waveform is a differential signal of opposite polarity and common mode current is cancelled out.

Resonance is determined only by the fact that the length of each antenna element is exactly 1/4 of the wavelength of the applied signal, and so the wave reflected from the ends is exactly 360º behind in phase which is the same thing as being in phase with the applied signal and the two add together to produce a resultant waveform with larger amplitude.

Edit by Andrew : The explanation in the following paragraph is incorrect and is where my confusion lies i believe.

So antenna resonance results in no reactance in the impedance at the feed point. The original traveling wave current produces the standing wave current, the former being the same current which flows through the source. As a result of antenna resonance due to the elements being exactly 1/4 wave length, the current at the feed point is in phase with the voltage of the applied RF waveform and so the impedance presented at the feed point contains no reactance. The phase relationship between the common mode voltage and resultant current of the standing wave doesn't determine the reactance present in the antenna input impedance, how can it when there is a 90º phase difference ? The applied voltage drives the common mode impedance of the antenna which is a balanced system where each element is in series with the source and each contributes to half of the real part of the impedance.

I think the confusion arises because as stated in many text books a half wave dipole at or near resonance only can be likened to a series RLC circuit with lumped constants where the reactance of the capacitor and inductor are equal and opposite at resonance and so the net reactance is zero. For the series RLC circuit the resonant frequency is defined by the well known equation fo = 1 / (2π x √LC). This relationship does not apply to a half wave dipole where the wavelength of the applied energy is not a small fraction of the dimensions of the device which possesses those electrical properties. To further iterate this idea, how does the above equation for fo represent a dipole operated at a harmonic other that the first ? It can't because for a given L and C there is only one solution or answer for the equation.

Is the above conclusion correct ? If it is not an explanation as to why would be greatly appreciated.

If someone wants to calculate the inductance and capacitance of a dipole and then plug those values into the above mentioned equation for a series resonant circuit and show mathematically that those values equate to the resonant frequency for all harmonics including the first, then my above observations must be incorrect.

You have answered your own question in a sense, by part of your statement that: "This image shows that the applied voltage is in phase with the current" this is the definition of the "real" or purely resistive part of the complex impedance. there is no standing wave at the feed point but a travelling wave from the source to the feed point, the standing waves start at that point and travel outwards, both to the left and right. the real resistance represents energy leaving the antenna never to return (radiation) the standing waves represent stored energy never to leave the antenna and always out of phase. only in phase energy leaves the antenna. If the antenna was placed in a conducting box (shielded) the real resistance would fall to zero (except for small Ohmic losses). this situation represent a condition that no energy is leaving the system. The feed line would develop standing waves, energy would be reflected back to the source and the system would behave as an open circuited transmission line. The method of matching an antenna to a source is to measure the return or reflected energy and is referred to as return loss, usually expressed in decibels, a large number of dB's is a good match, or very little energy is returned to the source.

I really do not mean to be glib about this but to your question why "a half wave dipole is resonant when the inductive and capacitive reactances cancel out" the simplest and honest answer is that the definition of resonance, i.e., when the input impedance (admittance) is just that the impedance be a non-negative real number.

In practice, we try to use a load impedance that matches the source impedance and thereby not just maximizing the delivered power but also to get a better control of the amplifier's behavior, so to speak. (It is not quite true that power amplifiers working in or near saturation need conjugate matched loads to deliver the highest possible amount but let us leave that issue aside.)

In a more general level, any linear system governed by Maxwell's laws can be represented as a finite or infinite net of lumped element inductors, capacitors, resistors and, very importantly, ideal impedance transformers with ideal transmission lines all are being governed by Kirchhoff's loop (voltage) and branch (current) laws. This representation includes waveguides and radiating systems (antennas). Of course, a transmission line itself can also be represented as an infinite connection of RLC elements.

From the point of view of the source, therefore, a very complicated radiating system can be represented as a conventional passive lumped element circuit presenting a conventional impedance load formed by resistors, inductors, capacitors and transformers. The only definition of resonance I am familiar with is the set of frequencies where the driving point immittance (impedance/admittance) is a non-negative real number. When the system is reactive (lossless) then at these frequencies the immittance has either a null or its reciprocal has a null. There is no null for a radiating system because on its other *output* side it is loaded with a radiation resistance that is a real positive number. 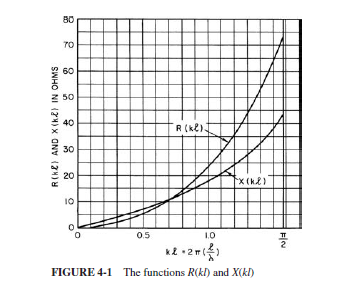 0
Current at steady state through inductor
0
Characteristics of a traveling wave on a half wave dipole antenna
0
Is self-inductance and velocity factor included in equations for half wave dipole imdedance?
0
Do these equations for dipole impedance work for a full wave dipole?
0
Why isnt the angle between EMF and LC impedance 90 degrees in AC circuit?
1
What is the difference between antenna input impedance and its radiation resistance?