I have been struggling in the past weeks to understand how should I setup a laser interferometer for my experiment. I am not a physicist, and I am quite new to optics.

I have a Cassegrain telescope with a primary mirror M1 and a secondary mirror M2 and I want to monitor the relative displacements and tilts between M1 and M2. How can I obtain that output with the minimum number of optical components? I am also not sure about the detector I should need. I was thinking of a simple system that I don't know if it could actually work. I still have to purchase the components, but the budget should be around 2K.

First of all, I thought that cornercube retroreflector on both M1 and M2 would be necessary. With flat mirrors the beam would not be reflected if there is some tilt, right?
The laserbeam passes through a beamsplitter: one half goes to a right angle prism and then toward the retroreflector on M1 (can it count as the reference beam?). The other half goes to the retroreflector on M2. The beams from M1 and M2 are then recombined in the beamsplitter and the interference beam goes to the detector (PSD, quadrant photodiode?)
Would a system like this be able to give me as output the relative displacement (like a classic Michelson interferometer) and maybe the tilts (looking at the current in the quadrant photodiode perhaps)? 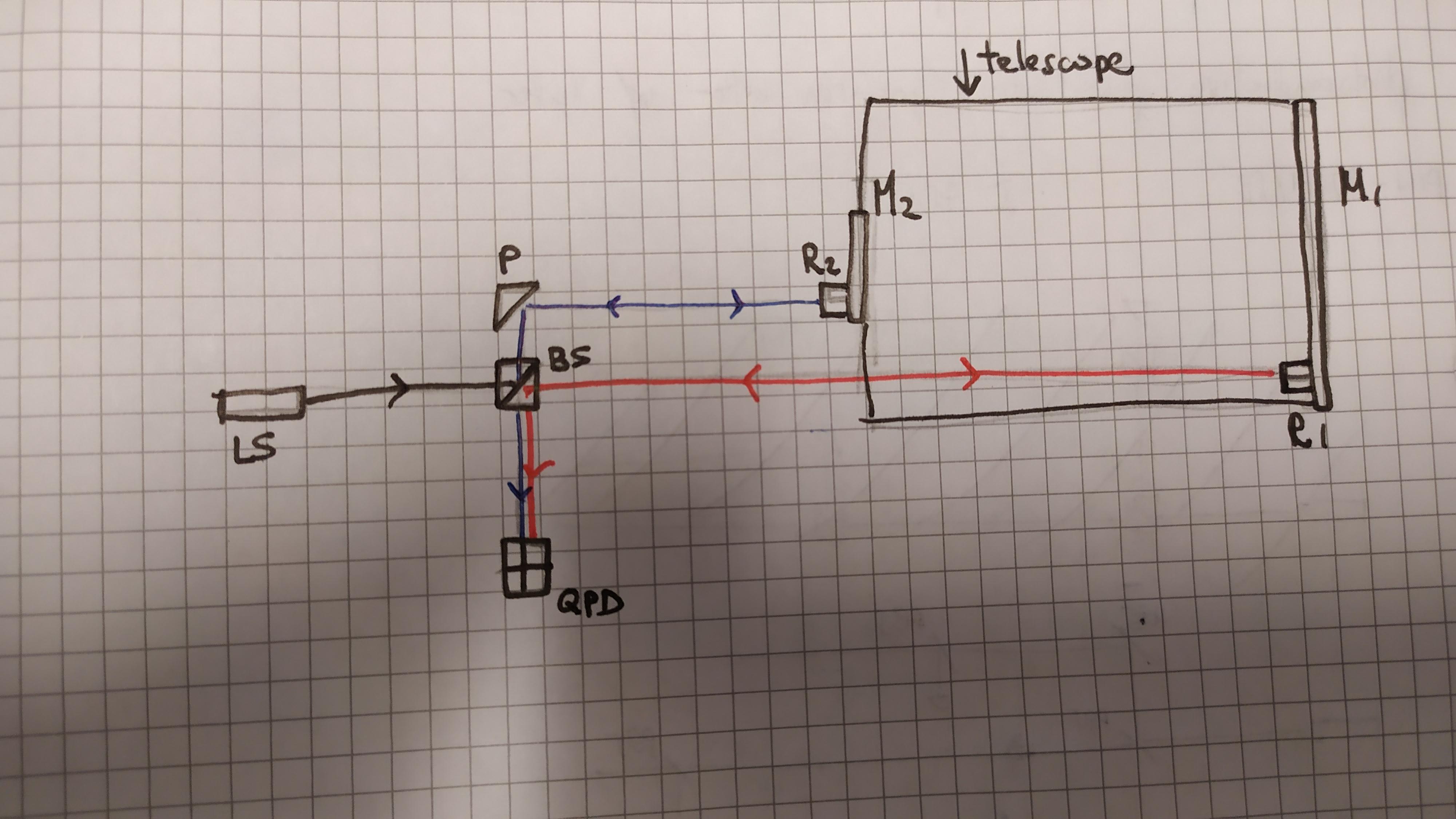 EDIT: here's the version with paths of same length

There are many ways to measure tilt and separation changes using interferometry. As @Gilbert pointed out, for large displacements you need a way to keep track of the direction in which fringes are moving. Actually, that's not too difficult if a video record is kept of the fringes. An automated way to do it is to make a subsystem that locates the peak of a fringe and "dithers" the system to determine whether a sensor is on the left or right side of the peak via the relative phase of the "dithering" motion and the signal change at the sensor. IMHO, retroreflectors should not be necessary, and might confuse the results because they don't really exactly produce a time-reversed wavefront. It's probably best to simply set up the telescope with a laser to produce fringes that cover the field of view, get the telescope aligned the way you like it, and then monitor the fringes. Interpreting the fringe motion in terms of change of separation, tilt angle and direction will require some assumptions and a lot of math. If you include a sketch of the setup you're contemplating, I or someone else here will gladly comment on the setup.

So, this should be the setup of the experiment with the configuration we discussed about (the lens between BS and the sensor is missing):

Do you think it could work?

Does it make sense to put sensors also before? Both mirrors (reference on M1 and moving on M2) are actually moving, thus perhaps also the interference between the original laser beam and the splitted beams might be helpful and meaningful?

This should be an absolute measure, while the previous one is relative between M1 and M2. I hope I have been clear enough.

3
How does light behave after experiencing fully destructive interference, as in an interferometer?
3
Michelson interferometer beam splitter phase shift
0
Average number of fringes
0
Possible to change optical properties of tissue?
2
Since a collimated beam is always in focus, can't I simply just emit a collimated beam over the varying distances as the target object moves?
4
Reason why light beam hits detector