Is velocity an angle?

I am not a physicist. I have only rudimentary notions about the following.

I looked for similar questions on SE but I did not find any. I also tried search engines but results relate to angular velocity which has nothing to do with my question.

I do not know Lorentz transformation well enough to understand how the Lorentz factor emerges from it.

So, does that mean $\phi$ is a more fundamental dimension than velocity?

Edit: found this: http://reciprocalsystem.org/PDFa/RS2-108%20The%20Lorentz%20Factor%20(Peret,%20Bruce).pdf It says Lorentz factor is a unit circle.

Edit2: I found this picture 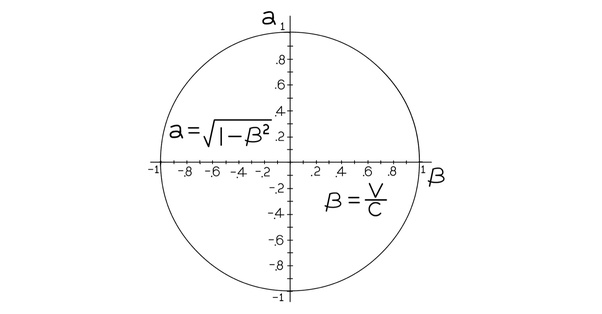 So, does that mean $\phi$ is a more fundamental dimension than velocity?

I wouldn't say that $\phi$ is more fundamental than velocity, but it is certainly a useful way to represent the quantity of motion.

As I said in a comment, velocity is the spacetime slope of a worldline and at relativistic speeds it is better to work with the angle than the slope. However, there's a reason that we generally prefer to use the hyperbolic angle (which as Rob Jeffries mentions is termed rapidity) rather than your $\phi$.

The circular functions are fundamentally connected with the notion of distance in the Euclidean plane, (and by extension, to distance in Euclidean space of any number of dimensions). The equation of the circle comes from Pythagoras' theorem. The point $$(x=r\cos\phi,y=r\sin\phi)$$ is obviously at a distance $r$ from the origin. If we use a rotated coordinate system (with the same origin) we get coordinates

Now let's see how this connects to SR (Special Relativity).

Let's say that we are two inertial observers moving relative to one another. That is, we're not experiencing any acceleration, but you're moving with a speed of $v$ relative to my frame, and conversely I'm moving at $-v$ relative to your frame. We can each choose the direction of motion to be our X axis (and to keep things simple we can ignore the other 2 space directions).

I won't derive it here, but it can be shown that:

With this setup, $\beta=\frac{v}{c}=\Delta x/\Delta t$ of a particle travelling (in uniform motion) from A to B is essentially the slope (tangent) of the worldine from A to B (apart from that factor of $i$). In Einstein's classic The Meaning of Relativity you'll find numerous mentions of these imaginary tangents.

That's ok in simple scenarios where we only need 1 space dimension (like the above scenario), but it gets messy when we need to work with all 3 space dimensions. (Also, it's nice to avoid complex numbers if we can). Fortunately, we can invoke the hyperbolic functions, which are analogous to the circular functions, except they have the minus sign that we need:

And now we can use $\beta=\frac{v}{c}=tanh(\phi)$ which has useful mathematical properties. At low speeds, $\beta\approx\phi$, and we can combine speeds by simple addition. At relativistic speeds, just adding slopes is no longer an adequate approximation, we need to add the (hyperbolic) angles.

However, there's nothing wrong with using the circular functions to do simple relativistic calculations involving $\beta$ and $\gamma$. It's just the standard these days to use the hyperbolic functions.

Here's a cute way (using standard Pythagoras' theorem) to avoid square roots when working with $\beta$ and $\gamma$ for bodies at relativistic speeds. For all $k$,

To combine two speeds using this $k$ parameter, we multiply the parameters. Eg, if body A has

As robphy mentions in the comments, this $k$ is used in Bondi's $k$-calculus. $k$ turns out to be the radial Doppler factor, and it's related to the rapidity via

Note that the reciprocal of $k$ can be used define a negative velocity of equal magnitude but opposite sign to the velocity defined by $k$.

Other useful and elegant results are that the Doppler factor due to a rapidity $\phi$ is just $\exp (\phi)$ and that the proper acceleration is just $d\phi /d\tau$, where $\tau$ is the proper time.

The following may be useful. If you consider the Lorentz transformation as a matrix operation, you obtain the following form (considering only time and one space dimension):

where $\beta=\frac{v}{c}$. If you plot up the transformation applied to a grid of $\left(ct,x\right)$ points, you obtain a remapping as shown below. Note however, that the diagonal lines which represent the constant velocity of light only compress or expand the points. This figure was calculated for a $\beta=0.3$. 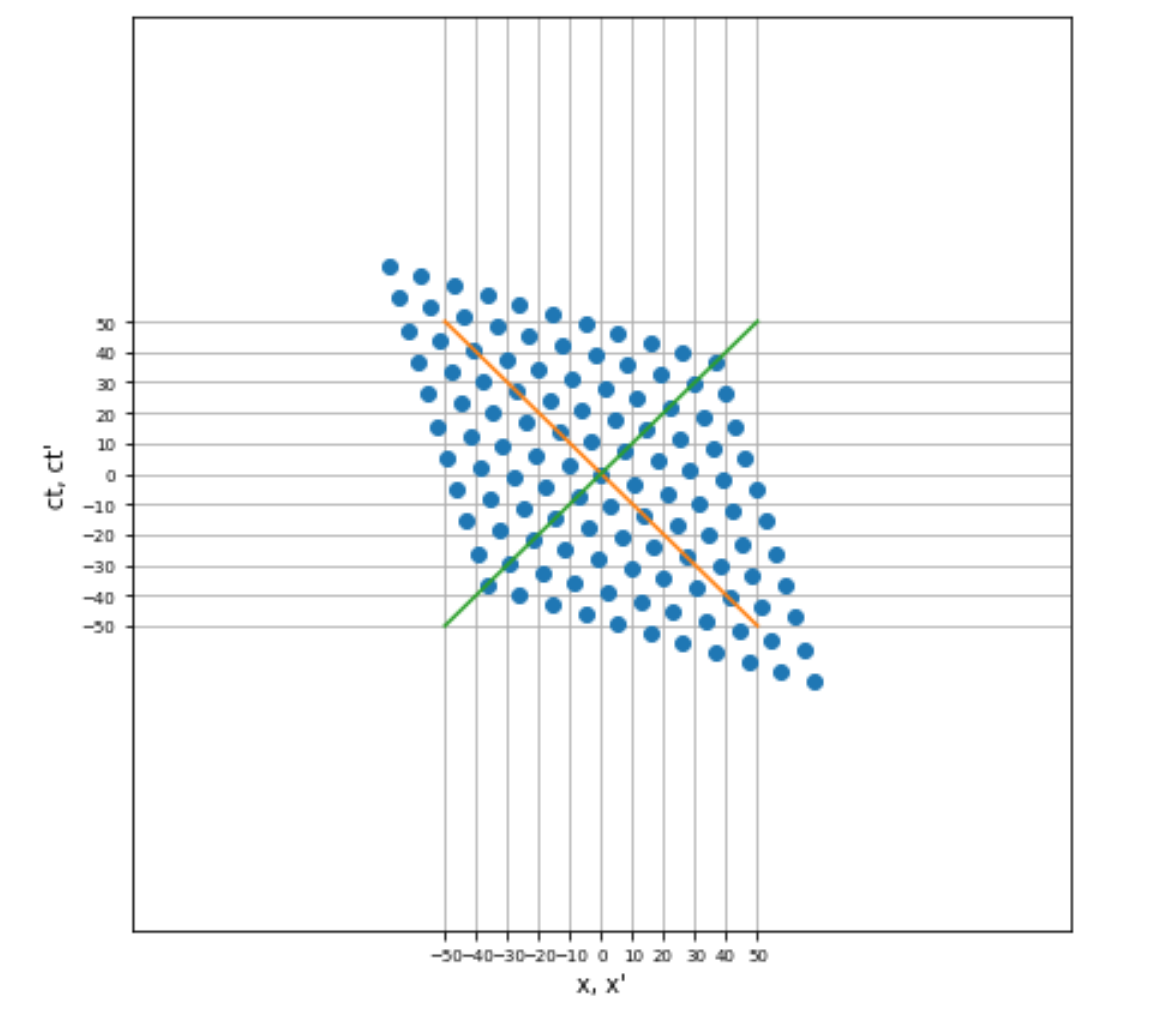 I have a rather crude but geometric interpretation as to why the velocity and the angle seem to be connected:

In special relativity, we 'map out' all the paths and interactions that happen in the universe in a spacetime diagram. This is essentially a graph, but with time running vertically, and the space directions perpendicular to it.

Here the vertical axis represents time, and the horizontal one is one dimension of space. The dashed diagonal you see is the path traced out by a ray of light. This is called its worldline. You can see that it makes an angle of 45 degrees (which I will now refer to as $\pi / 4$). Now, assuming that $c = 1$, this can interpreted by saying that light travels 1 unit distance in 1 unit time (in natural units)

The interesting point is that angle. Light makes an angle of $\pi / 4$ on the space time diagram. Any particle moving slower than $c$ will cover lesser units of distance in more units of time, thus giving a steeper slope.

Here the blue particles goes slower than light, so it makes a steeper slope in the diagram. Which is analogous to saying that the angle with respect to the time axis has decreased. So, if you define $\phi$ to be the angle between the time axis and the worldline, then $$v \propto \phi$$

which is a positive definite result. In fact the actual Lorentz transformation for light speed gives you $1 / 0$, which is not defined.

A rather more appropriate term would be $$v = \tan \phi$$. This matches the Lorentz transformation a well. Of course, this is still far away from the formal Lorentz transforms using $\cosh$, $\sinh$, and $\tanh$.

These were my two cents on why the angle pops up.

Not the answer you're looking for? Browse other questions tagged special-relativity velocity or ask your own question.

1
Why is the kinetic energy for non-relativistic velocities not described by $KE=mc^2$?
2
Minkowski's complex Euclidean space vs. the real pseudo-Euclidean version
0
Decayed object energy into kinetic energy
1
Does multiplying $E = mc^2$ and time dilation have any significance?

0
Observers in Special Relativity
2
Composition of Lorentz Transformations
0
What's wrong with using the 4-current to find the potential of a moving particle?
3
The relativitic energy formula for an accelerated particle
0
Ratio of relativistic energy to rest mass energy
1
Does the space collapse to a singularity, for a photon?
0
Lorentz Force Equation
8
Seeming violation-wave travelling faster than speed of light