Ask Question
Asked 2 months ago
Active 2 months ago
Viewed 42 times
1
$\begingroup$
Closed. This question is off-topic. It is not currently accepting answers.

I'm supposed to use the Lagrangian approach in the solution. I've just recently started classical mechanics course and it's still somewhat confusing to me. 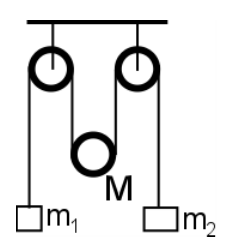 The problem I am working on is as follows: "2 masses $m_1$ and $m_2$ are connected with a line across 3 pulleys of which the middle one has mass $M$ and can move freely in the up-down direction. The line is frictionless and massless. Find the acceleration of $m_1$ and $m_2$."

What I've figured on my own so far: 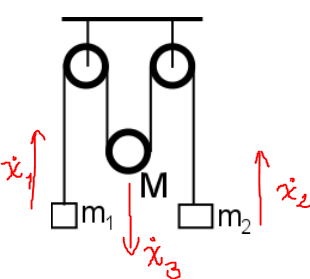 This is where I'm somewhat stuck, as I don't think I can write down the Lagrange's equation yet as I've got both $x_1$ and $x_2$ in there, and I would expect to only have one $x$ and it's derivative.

As I've said, I'm new to lagrangian mechanics and I've got zero intuition on how to approach such problems so I'd be more than welcome for any clue.

There is one Lagrangian for both $x$'s, but there is a separate Euler-Lagrange equation for each of $x_1$, $x_2$.

Not the answer you're looking for? Browse other questions tagged homework-and-exercises classical-mechanics lagrangian-formalism string or ask your own question.