I study Power Engineering in University. Today I asked my lecturer to explain me exactly how atom's electrons act under spinning rotor's magnetic field, that generated dynamic electricity. But he even didn't gave me to finish my question and said : "Explaining it to you is useless, you are not capable of understanding it". I felt very angry hearing these words, like I was an idiot. So I have some thoughts about electrons behavior under spinning rotor's magnetic field and I want your answer, is this theory correct and if it's not than why?

here is my theory:

Consider this is simple atom: 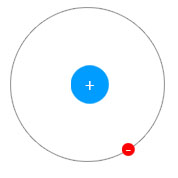 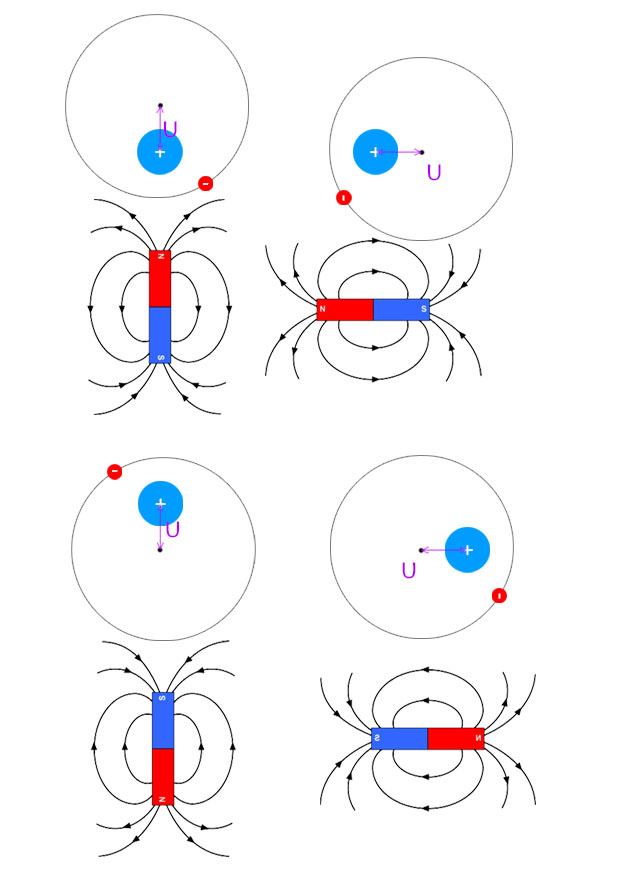 That's why increasing rotor's magnetic field makes more voltage, and that's why air's ionization happens around high voltage wires (voltage like: 220 kv, 500 kv). Nuclear has not enough power hold electron and so this electron moves to new air's nuclear. I think that also explains why Current and Voltage are 90 degrees out of phase.

Please read my theory and tell me I am right or not, I really want to understand how this everything is done.

Also my lecturer told me that every information I can find on internet is written by fools and foolers are reading them. So I want to tell him that he is WRONG!!!

Well, your lecturer certainly shouldn't have put it like this, however it's true that you have got a lot wrong here. It's stuff you definitely will need to understand better if you're studying power engineering.

First, you seem to think that electrons are attracted by magnetic north poles. They aren't; in fact stationary charges and magnetic fields aren't concerned with each other in any way at all1!

Next, you're talking about electrons in circular orbits about the nucleus. That's roughly the Bohr model, which kind-of-sort-of-works, but not really. You want to familiarise yourself to the orbital model, which describes very well how bound electrons actually behave.
Even in an orbital, you might be inclined to talk about "the nucleus is off the center by a distance proportional to the voltage". That's again kind-of-sort-of-right since the nucleus lies in a locally-harmonic potential which can be read as "pertubation by an electric field (which in a fixed capacitor is proportional to the voltage) will cause a proportional displacement of the nucleus", but the way you phrase it it's still nonsense. Voltage "is" not a distance, it's a potential (i.e. energy).

Anyway, this isn't actually relevant to understanding rotating-magnet phenomena, i.e. inductance in coils. These are concerned only with conduction electrons, which aren't bound to any particular atom at all but "move" through the entire conductor, which is why there can be currents. It is these moving electrons that experience a significant force in the presence of a magnetic field. What current actually is is the number and "speed" with which these electrons move through the conductor, while even a strong displacement of the bound (valence) electrons would not consolidate a current2.

As you see, the whole subject is quite a bit more complicated than you thought. I'm sure you are capable of understanding it, but probably not in a few minutes, which is why your lecturer can't really be blamed for not trying to explain it right away.

1Actually, electrons are also small magnets themselves (they have an instrisic quantum-mechanical spin) and therefore are attracted to inhomogenic magnetic fields, but that's quite another issue.

2Actually, it would... but that's mostly relevant in the high-frequency-regime, i.e. bound electrons that jiggle back and forth very quickly.

Not the answer you're looking for? Browse other questions tagged electromagnetism electricity electrons atoms voltage or ask your own question.

16
Is it possible to project a magnetic field at a location in space?
0
Does a magnetic field sustain a current in a loop?
2
How does a magnet cause magnetic force and its magnitude/direction?
1
What causes force between two poles of magnets on an atomic level?
1
Electrons as tiny magnets
0
Motion of a magnet inside a solenoid