Is Feynman's explanation of how the moon stays in orbit wrong?

Yesterday, I understood what it means to say that the moon is constantly falling (from a lecture by Richard Feynman). In the picture below there is the moon in green which is orbiting the earth in grey. Now the moon wants to go at a tangent and travel along the arrow coming out of it. Say after one second it arrives at the red disc. Due to gravity it falls down toward the earth and ends up at the blue disc. The amount that it falls makes it reach the orbital path. So the moon is constantly falling into the orbital path, which is what makes it orbit. 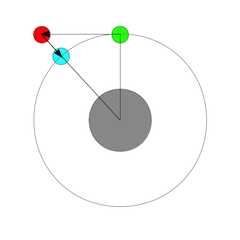 The trouble I'm having is: shouldn't the amount of "fall" travelled by the moon increase over time? The moon's speed toward the earth accelerates but its tangential velocity is constant. So how can the two velocities stay in balance? This model assumes that the moon will always fall the same distance every second.

So is the model wrong or am I missing something?

Extra points to whoever explains: how come when you do the calculation that Feynman does in the lecture, to find the acceleration due to gravity on earth's surface, you get half the acceleration you're supposed to get (Feynman says that the acceleration is $16 ~\mathrm{ft}/\mathrm{s}^2$, but it's actually twice that). 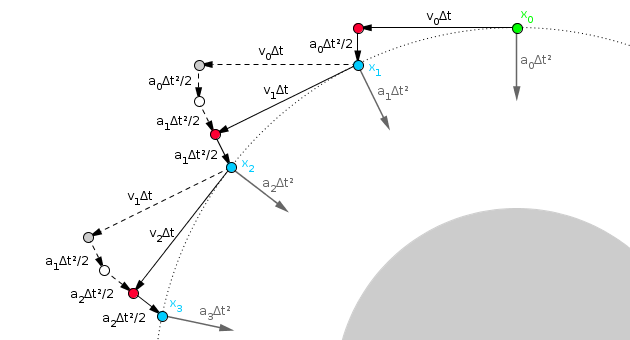 In the absence of gravity, the moon would travel at the constant velocity $v_0$, and would thus move a distance of $v_0 \Delta t$ during the first time step, as shown by the arrow from the green circle to the red one. However, as it moves, the moon is also falling under gravity. Thus, the actual distance it travels, assuming the gravitational acceleration stays approximately constant, is $v_0 \Delta t + \frac12 a_0 \Delta t^2$ plus some higher-order terms caused by the change in the acceleration over time, which I'll neglect.

However, moon's velocity is also changing due to gravity. Assuming that the change in the gravitational acceleration is approximately linear, the new velocity of the moon, when it's at the blue circle marking its new position $x_1$ after the first time step, is $v_1 = v_0 + \frac12(a_0 + a_1)\Delta t$. Thus, after the first time step, the moon is no longer moving horizontally towards the gray circle, but again along the circle's tangent towards the spot marked with the second red circle.

Ps. Of course, the picture I drew and described above, with its discrete time steps, is just an approximation of the true physics, where the position, velocity and acceleration of the moon all change continuously over time. While it is indeed a valid approximation, in the sense that we recover the correct differential equations of motion from it if we take the limit as $\Delta t$ tends towards zero, it's in that sense no more or less valid than any other such approximation, of which there are infinitely many.

However, I didn't just pull the particular approximation I showed above out of a hat. I chose it because it actually corresponds to a very nice method of numerically solving such equations of motion, known as the velocity Verlet method. The neat thing about the Verlet method is that it's a symplectic integrator, meaning that it conserves a quantity approximating the total energy of the system. In particular, this means that, if we use the velocity Verlet approximation to simulate the motion of the moon, it actually will stay in a stable orbit even if the time step is rather large, as it is in the picture above.

Assume the distance between the green and red balls is very short. The Moon's horizontal speed happens to be such that as it travels horizontally from the green to the red, it falls to the blue (this is what we're assuming in the first place, after all).

Now the Moon has traveled horizontally and fallen, so that it's at the same distance from the Earth as when it started.

Now redraw the diagram by rotating it slightly. The Moon is now at the position of the new, redrawn green ball, with the same velocity it had at step 0. It's going to do exactly the same thing going from step 1 to step 2, and 2 to 3, and so forth. This process repeats itself infinitesimally and continuously.

If the Moon's velocity were different, if it were moving faster or slower, or in a direction other than perpendicular to the line connecting the Moon and the Earth, then it wouldn't behave this way. Its velocity happens to be very close, in both direction and magnitude (speed) to keep it at the same distance from the Earth with a constant speed. And if it maintains a constant distance and speed over a short period of time, it will continue to do so indefinitely.

Note that this description doesn't make use of the fact that gravity falls off as the square of the distance; since the distance remains constant, all we need to assume is that it's constant for a given distance, and radially symmetric. In reality, the Moon's orbit is distinctly elliptical, something that's possible only with an inverse square force. If the gravitational force fell off as, say, the cube of the distance, then an elliptical orbit would not be stable -- but a perfectly circular orbit still would be, at least in the absence of any perturbations.

Picture this. Take your desk and put in top of the tallest building on earth. Put a penny on the desk and flick it with your finger. (The point of this is that we are only giving the penny a horizontal initial velocity and letting gravity do the rest for us, that is we are letting the 'falling' do all the work.) The penny falls and hits the ground. Now flick it a bit harder and it will go a bit further before it hits the ground. Now hit much harder. It will go much further, and if you hit it hard enough, you will get a bit of extra time in the air since the earth's curvature will start to come into play. Note that the penny is still falling in all cases. Now just keep flicking the penny until eventually you put it in orbit. That is, orbiting is just a special case of 'falling'.

Your diagram of the red and green balls will make for a great explanation. It seems your hang-up is that you'd expect the green ball's velocity to get faster and faster.

You can imagine a few scenarios that should make it more clear:

Scenario 1: Let go of the green ball with no horizontal velocity. It's velocity will increase as it falls towards the center.

Scenario 2: Imagine the green ball moving away from the center rapidly but still with no horizontal velocity. Instead of falling towards the center, the acceleration of gravity must slow it down first before reversing its direction. In this case it actually starts out getting slower and slower.

Scenario 3: Give the green ball horizontal velocity like in the diagram. As it moves towards the red position it is getting farther away from the center like in scenario 2. To get it to fall into the center it would need to be slowed down before it could be sped up. In the process of slowing it down by moving it from where it was aimed at (the red position) to where it actually ends up (the blue position) the ball speeds up perfectly balancing out the amount it needed to be slowed down.

That is, the reason something doesn't fall faster and faster is that orbit is the perfect balance between needing to slow down and speed up the object before it can fall towards the center. It's the perfect mix between scenario 1 and 2.

If you're trying to imagine this discrete stair-step-like orbit remember that it doesn't happen in discrete steps. Acceleration is happening on the ball constantly (infinitely often) and all of the acceleration that would be used to speed up the ball is instead used just to deflect its trajectory, thereby keeping the absolute magnitude of its velocity constant.

The way to understand it is to notice that a very precise value of acceleration (or falling) needs to be achieved in order for the moon to stay in perfect circular orbit. If the acceleration were slightly too much (compared to the velocity), then as you said, the moon would fall more and more at each time step, until it enters the atmosphere and blows the earth to smithereens.

Here is a way to understand the acceleration from a purely geometric standpoint by using a few approximations. 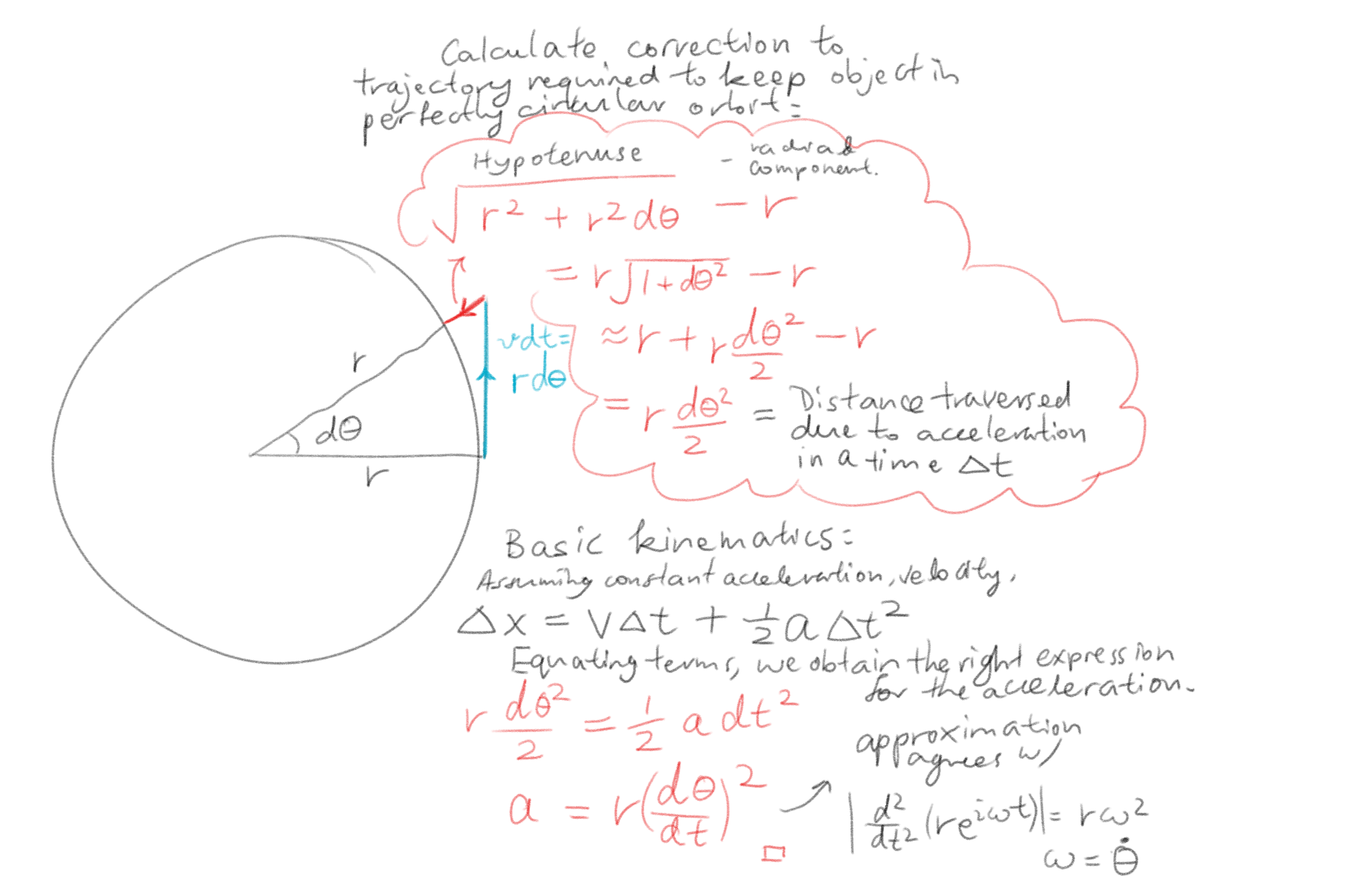 Your confusion lies in the fact that you think that the acceleration is always pointing in the same direction all of the time. This is not the case. The acceleration is changing all the time as the moon changes position, since the radius of its trajectory is much larger compared to the size of the earth.

After going around the earth once, the sum of the velocities accumulated from the accelerations comes full circle and perfectly cancels out, and the moon is once again hurtling forward with the same tangential velocity as a month or so ago. So no particular direction is biased, and the moon does not pick up any speed in any particular direction, and consequently does not fall.

One way to look at is in terms of centrifugal force. Just as for the moon, a satellite in orbit around the earth has a balance between gravitation inward and the 'fictitious' centrifugal force outward.

Or writing in terms of tangential velocity $v = \omega r$, we get

Read Newton for yourself. Consider the reality of an imagined straight line path that is never traveled.

Compare (and contrast) orbits to demonstrable projectile physics. Keep in mind falling is an accelerated phenomenon that draws bodies towards Earth's center.

Sir Isaac's idea revolves around the notion that physical bodies can fall in circles. An idea that would appear to contradict demonstrable projectile physics and the fact that the perpendicular components of projectile motion are demonstrably independent of each other.

Curved spacetime might make more sense, for what it's worth... but even that could be as circularly reasoned as Newtonian orbital mechanics are.

40
"Falling upward" - how far you have to be from Earth to start falling to the Moon?
0
Why the Moon does not change its orbit from Earth to an another planet?
1
What happens to the water on the surface of the Earth if the Earth is not rotating about its axis in the Earth-Moon system?
33
Is there a maximum distance from a planet that a moon can orbit?
0
How do I calculate evection and variation for the moon in my simple solar system model?
0
How does the Sun's gravity affect the shape of the orbit of the Moon around the Earth?
1
Why do the 2 planets in a two-planet system orbit around the center of mass?