In the arrangement shown in the figure, the ends P and Q of an unstretchable string move downwards with uniform speed V. Pulleys A and B are fixed. What will be the velocity of Mass M?

The answer is $\frac V {\cos\theta}$. I've seen the solution of this problem in many websites, and I understand the method. But my problem is that it is easy to mistake the upward velocity of the mass M to be $2Vcos\theta$, which is wrong. Although I understand the right method, I'm still not able to get perfect clarity on why $2v\cos\theta$ won't work here. If someone can, please explain the contradiction in detail with examples. What if this mass is pulled by two bikes, each moving at a velocity V, with an angle of separation $2\theta$? Would the velocity of the mass be still $\frac V {\cos\theta}$? 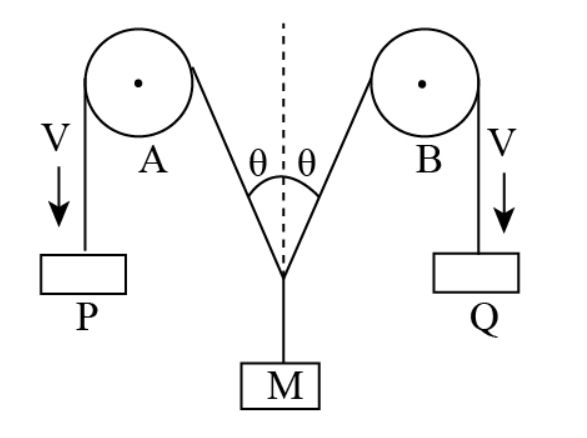 If the $ 2v \cos \theta$ was the velocity of the block, then it would mean that the block is moving faster up than the rope is going up!

Comparison with boat problems, in the boat problems it's like the river acts like an escalator (Know the one in airports?) so that either boosts the speed of the boat or reduces it. Here it is different because the object is constrained to move at the same velocity as the rope for a physical situation. THe closest analogy I can think of is a paper boat moving at the same speed as a river flows.

In this problem, you are not concerned with the vector sum of the two tensions, only with the relative velocities. For that you can work with just one side.

This kind of diagram is often used to study forces. Forces do add like you are thinking.

But this is velocity. Consider the case where $\Theta = 0$, and the pulleys are right next to each other. If P and Q drop as distance, you would expect M to rise the same distance because the string stays the same length.

You see the addition of velocities is done when you are changing reference frames, but in this case the velocity of the mass is the upward velocity of the point to which it is attached. Hope this explains your doubt

Not the answer you're looking for? Browse other questions tagged homework-and-exercises newtonian-mechanics vectors velocity string or ask your own question.

0
Which component of velocity should we choose?
0
Constrained motion relation equation
18
Why is velocity a vector?
7
Addition of velocities vs. Addition of forces
2
How to resolve velocity components?
2
Why do these two methods give different answers?

3
Relative wind velocity explanation
3
Why are some forces not included in the sum of forces?
4
Problems regarding components of velocity
6
Calculating the direction of friction on an inclined plane/Determining the fate of a round body on an inclined plane
0
What is physically changing from velocity or acceleration to force and their vector components?