How, if at all, do Tachyons experience redshift?

I recently attempted to answer this question, to which I felt qualified because the possibility of Tachyons had been discussed when I took a course on Special Relativity. In that same course I learned the formula $\lambda' = \lambda \sqrt{\frac{1+\beta}{1-\beta}}$ to describe relativistic red- and blueshift.

In order to provide more clarity I found an image on the internet which is added to the bottom of this post. In that image it was shown that light the light of the particle would be blueshifted as it approached the observer and redshifted as it moves away - just as regular particles with $\beta < 1$ would behave. But I did consider it my responsibility to check whether the information I was providing in my answer was wholly correct, and so I tried to compute the redshift for $\beta = 2$ and $\lambda = 400$ nm.

For now I added a note to my answer to admit that I am not sure in what way the light would be blue or redshifted - although I am certain that it would still arive in some form or another since $c = 1$ is not changed.

My question then is, do any of Einstein's theories provide a way to interpret this imaginary-shifting of light, or is this, like the fact that their mass is expected to be infinite just another argument that the Tachyon's existence is unlikely? 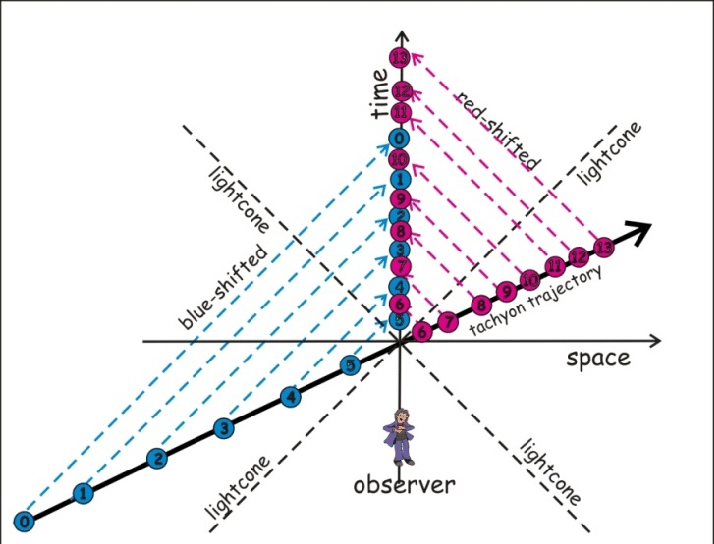 Browse other questions tagged special-relativity faster-than-light redshift tachyon or ask your own question.

3
Is Light our limit?

12
Tachyons and Photons
16
How is the speed of light constant in all directions for all observers?
5
Relativistic Doppler effect on gamma rays
0
Tachyons and the light barrier
1
Tachyons and Lorentz velocity transformation
2
How do we know tachyons don't exist?
2
Isotropy of the universe in different reference frames
4
Red- / Blueshifting and relativistic length contraction at $0.8c$ - How would it look?
3
Cosmology - an expansion of all length scales