Why is the tension on both sides of an Atwood machine identical? 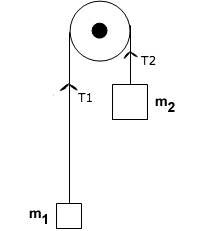 Tension in a rope is another word for the force the rope exerts.

Forces always occur in equal and opposite pairs. This is true for a rope. There are two ends. The ends pull two objects toward each other with equal force.

Instead of masses hanging from a pulley, suppose two massive people named 1 and 2, had a tug of war. Suppose 1 pulled harder than 2.

So if 1 is pulling harder on the rope than 2, why is the rope pulling equally hard on 1 and 2? Why doesn't the rope pull back with the same force as each person pulls?

But in a tug of war, both 1 and 2 will move if 1 pulls harder. They will have the same velocity and acceleration in the direction 1 is pulling, and they will stay a constant distance apart.

Suppose 2 wasn't pulling. He was just standing on frictionless ice and letting 1 pull him with force $F_1$. What is the force in the rope? You can see the force is between $F_1$ and $0$.

It isn't $0$ on 1's end. He is accelerating forward, but the rope is pulling him back. He would accelerate faster if not for the rope.

You can do similar calculations when both 1 and 2 pull.

Equality of the two tensions only holds in the special case of a massless wheel in the pulley. If you read forward in your textbook to the section which deals with massive pullies, you will find that indeed these tensions should not generally be the same and it's only in the special case where the wheel is massless that they work out to be the same.

So in the end, I think you're right to be confused about this...the textbook hasn't yet given you all the tools needed to actually justify the assumption that the tensions work out to be equal.

(By the way, the section with massive pullies is likely titled "torque" or something similar. If not, check for "torque" in the index at the back. The massive pullies will be somewhere around there if the text is at all standard).

how could the same force T accelerate both of them an equal amount?

This part of your question holds the key - specifically the word acceleration.

What your question assumes, without explicitly stating, is that $T_1=m_1g$ and $T_2=m_2g$. There is no reason that this has to be true and if it were true then the forces on each mass would be balanced and they would not accelerate.

Also, when you later consider the mass of the pully- in which case the tensions at the ends of the string are not the same- you will see the implicit assumption that the tensions in the $\textit{string}$ are the same as the forces of the string on the $\textit{pulley}$. This is true, but not at all obvious as discussed in detail in the following reference. https://www.researchgate.net/publication/318107848_Force_and_torque_of_a_string_on_a_pulley.

You can search this site for detailed discussions of the case considering the mass of the pulley; e.g., search for "Atwood friction".

Since the pully system reverses the direction of each force, wouldn't the following be true?

Technically you are correct. But a few changes have to be made to your statement.

Its because the pulley in an atwood's machine is an Ideal pulley. It has no mass and its frictionless. This means that the rope is only going to slip over the pulley freely without rotating it at all. In that case the rope is completely isolated from the pulley and tension should be uniform throughout.
Note that frictionless means that no friction between rope and pulley

Had it been a rolling pulley (one with friction along rim so that rope does not slip), the tension on both ends would be different due to friction. and it would be that difference that help it turn.

Everywhere in mechanics a frictionless pulley implies that its a "slipping" pulley and not a rolling pulley (as we see in our daily life). These frictionless pulleys are kept only to change the direction of pull keeping the tension in the string same.

0
In a system of stacked blocks with friction, how can the top block have no acceleration?
1
Work energy homework question
0
Physics studying Forces help sos
0
Tension in rope between two objects
0
Tension in string in Atwood's machine
0
Action-reaction force diagrams
0
Forces in an elastic 1D collision
1
When we push a box, the box applies an opposite force on my hand, but why does my hand move with the box as I push the box if the net force of is 0?
1
Tension between two masses connected by a massles rod

9
Why does the tension on the pulley in an Atwood machine not equal $(m_1 + m_2)g$?
7
Tension in an Atwoods machine conceptual?
0
Newtons third law and Atwood Machines, confusion about tension
0
Can two bodies move with equal acceleration if forces acting on both are unequal?
2
Why do the masses in an Atwood's machine move?
0
How to find a constraint equation to relate the two tension forces in this arrangement?
1
Tension in an atwood machine
0
Why do we not consider tension force to calculate work?