I saw this animation (in which a man is running in place) and thought to repeat it and guess what ... I was able to do this.

My legs were pushing the earth back (I know this since my legs were sliding on the rough surface) but I was not being displaced. I would like to know how is this even possible. There is just a single friction force on me in the forward direction (from Newton's third law) but then also I didn't move at all.

Can someone explain the physics behind this ?

If we keep some cloth below us and run over it in the same way , the cloth is thrown back which indicates we are pushing the surface below us.

Note : Those who think it's a useless question just about the animation and nothing real, they should try to do this themselves :)

My legs were pushing the earth back but I was not being displaced.

How do you know your legs were pushing back against the earth? Did you have a force meter?

What you would actually find, were you to measure the situation properly, is that you did not actually push back against the earth. You only pushed up and down, effectively jogging in place.

The human body is a mighty complicated structure, and our intuition is surprisingly incomplete, given how much time we spend with that body. When you say "my legs were pushing the earth back," what you actually mean is that you felt as if your legs were pushing the earth back. This is proprioception, the word for our feeling for where our body is and what it is doing. It's an astonishingly powerful system, but it has flaws based on how it goes about measuring things. You can indeed fool yourself into thinking you are pushing on the earth. How? Well, you observe that for your current body position, contracting a particular set of muscles should push against the earth. However, our muscles come in pairs. If the antagonistic element of that pair fires at the same time, your muscle will tense as usual, but it will not generate any force on the ground. Instead, it will simply oppose the forces applied by the antagonist.

If you wanted to prove this, one thing you could do is try to repeat the experiment on ice, where the coefficient of friction is much lower. If you find that you can indeed do it on ice (which you should be able to), and feel "the same" as you did on solid ground, then you know the backwards force is insufficient to break the static friction on ice... which is pretty weak. This would quickly demonstrate that there was indeed no backwards force on the earth in the first place, and leave us with biological reasons for the feeling you experience.

Edit: The above answer was provided before the OP edited in the fact that they were letting their feet slip. In the case where the feet slip, the situation is actually more intuitive. When the feet stuck, one had to explain why there was the feeling of motion when there was no motion. In this case, there is motion.

In this situation, you are not actually staying perfectly still. While your foot is sliding backwards, it is indeed applying a force that propels you forward, accelerating your body. To stay still on average, there must be another force applied which decelerates your body on average. This force is almost certainly applied at the start of the footfall, when your foot is in front of you.

This is actually rather easy to see physically. How do you slip your foot backwards? If your full weight was on the ground when you did so, you would have quite a lot of forward acceleration. Your motion would look more like a step forward and a hop back! So it is almost certain that you are unweighting your foot during the slide. This is typically accomplished by a slight jump upwards, and then sliding your foot backwards once your upward acceleration is sufficient. This also means that, during that initial upward movement, right after the footfall, you are putting a very large amount of force onto the front foot (your weight plus enough to accelerate you upwards). This means you can have a very high force of static friction.

So when your foot falls, you use static friction to arrest your forward motion. You push upwards, unweighting the foot, and letting it slide back. This applies a little forward motion. When your other foot falls, it arrests that motion, pushing you back to where you were.

It is an exercise called "running in place"

Running in place doesn’t provide the same benefits as running since you use different muscles and movements, but many of the benefits are similar

From this article on the physics of running, 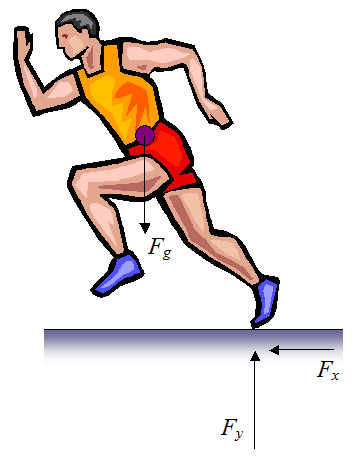 to run in place you must use your feet in such a way that there is no forward momentum due to friction of your shoes with the ground , which explains the quoted sentence above. It will be more like the frictional forces present in jumping in place.

2
Moving with constant velocity in presence of net force

17
Does holding weights allow you to run faster?
0
Pushing a block on a frictionless surface - same acceleration?
0
Buoyant force and the reaction force to weight
2
Why does Friction act Parallel to the Surface (Microscopic Level)?
0
Why a Box moving at Constant Velocity isn't doing Work?
1
Change of buoyant force as object moves deeper
1
The Calculation of work in different frames
1
How does friction helps us to move/walk?
0
Question about friction, work, and Newton’s 3rd law