The cause of surface tension is said to be asymmetry in the forces experienced by the molecules at the surface due to different interactions with air and liquid, but then the same argument also applies for all other surfaces, where the fluid is in contact with the container then why isn't all strange surface tension phenomenon seen at those surfaces? And how can surface tension be described as perpendicular forces to an imaginary line at the surface, isn't it supposed to act in all direction??

Regarding capillarity, in deriving the equation $ \gamma= \frac{r h \rho g}{2 \cos \theta_Y}$, we use the relation of excess(over the pressure on convex side) pressure on the concave side which is derived only for spherical bubbles or drops. then how can we assume the meniscus formed will be spherical and not defined by some other function?

Your question consists of three parts so let's answer them one by one.

1) Surface tension between liquid-solid and air-solid

why isn't all strange surface tension phenomenon seen at those surfaces?

Just a short note upfront: I don't know what you mean by 'strange surface tension phenomenon' so I will explain in general how surface tension is also present for the liquid-solid and the air-solid interface.

You are absolutely correct in saying that these interactions also exist at other interfaces, so also at the interface of the liquid and the container (solid) and at the interface of the air and the container. The main reason why this is not easy to see is that the solid is extremely rigid as compared to the liquid and gas and therefore doesn't significantly deform because of surface tension acting on it.

You can, however, see a signature of the surface tensions of gas-solid and liquid-solid in the case of a sessile drop. What happens there is that the droplet while adjust it's shape to a certain contact angle ($\theta$). According to the balance of there 3 surface tensions. This can be visualized as follows: 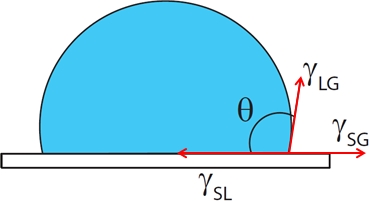 If you balance the surface tensions you get an equation which is called Young's equation: $\gamma_{sg}=\gamma_{sl}+\gamma_{lg}\cos\theta$. If, for example, the surface tension between the liquid and the solid is extremely high, this will result in a contact angle that is close to 0.

how can surface tension be described as perpendicular forces to an imaginary line at the surface, isn't it supposed to act in all direction?

This is actually not true. Surface tension is a force parallel to the surface. The reason comes from the molecular origin of surface tension. Let's explain it in terms of the liquid-air interface. Liquid molecules prefer to have a certain amount of interaction with their surrounding liquid molecules. If a molecule is located at the air-liquid interface, it doesn't have sufficient interaction with the air molecules. To 'solve' this, the molecules at the surface will pull more strongly on the neighbors that are also on the surface, thus exerting a force parallel to the surface.

how can we assume the meniscus formed will be spherical and not defined by some other function?

I assume you meant to write the equation for capillary action: $h = \frac{2\gamma \cos \theta}{\rho g r}$. The assumption there is indeed that the meniscus is spherical. This is necessary to simplify the mathematics and be able to solve the liquid height in a capillary tube analytically.

You can estimate when it is still a reasonable assumption by calculating the capillary length: $\lambda_c=\sqrt{\frac{\gamma}{\rho g}}$ and comparing this to the radius of the tube. If the radius of the tube is below this length then surface tension is 'sufficiently dominant' to make sure that the meniscus is a spherical cap. You can see this capillary length in the equation for capillary action: $$h = \frac{2\gamma \cos \theta}{\rho g r}= \frac{2 \lambda_c^2 \cos \theta}{r} $$

Not the answer you're looking for? Browse other questions tagged capillary-action surface-tension or ask your own question.

1
Why does the surface of liquid rise due to surface tension?
0
Surface Tension-- Sessile drop

2
Pressure and surface tension
4
Concept of surface tension: excess pressure inside an air bubble in a tank of water
7
How does an air bubble have 2 surfaces and a liquid drop has 1 surface?
0
What would happen if two liquids of different nature are mixed together?
0
Doubt regarding surface tension- transfer of air across a small and large soap bubble