How could I see the distance light traveled from an airplane?

It was nighttime. I was flying on an airplane. As we were landing we passed over a highway. I saw cars below with their headlights on. I could see that the light from their headlights only lit up a certain distance in front of them. Any object that fell past that distance would have probably looked dark to the driver.

I'm confused as to how I was able to see this thousands of feet up in an airplane. The light from the cars' headlights only traveled a few feet in front of the cars but also traveled thousands of feet to the airplane I was on? How is this possible?

Also, how could I see the beam-light structure of the light, if the light is able to be seen by an observer in any direction? I feel like none of this makes any sense and we were never taught anything to clarify this in E&M. Maybe I just missed something truly important. 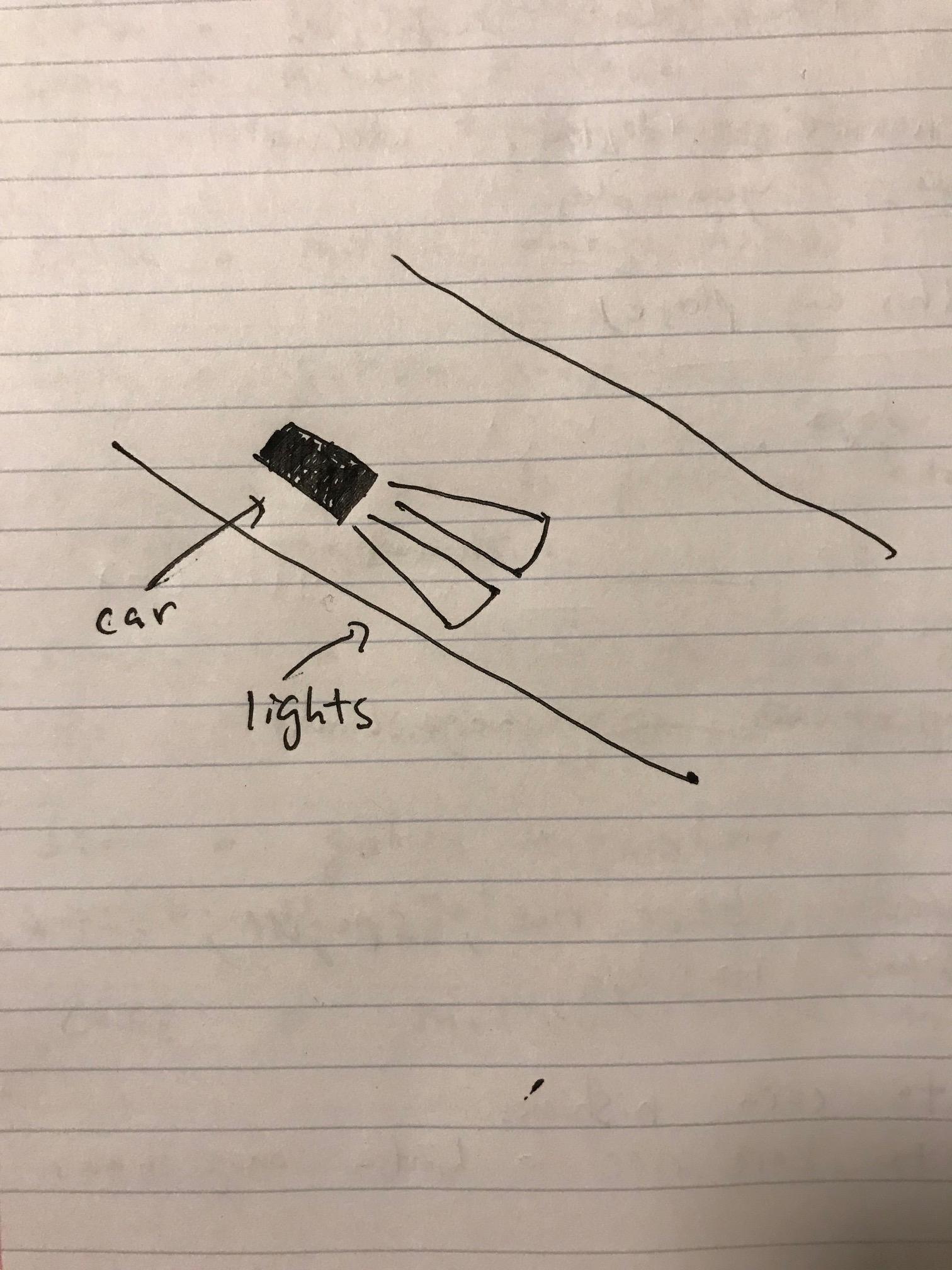 we were never taught anything to clarify this in E&M.

The basic is that our eyes see objects from light reflected from the objects.

Light coming from a source, the headlights of a car are a source, after a certain distance opens up spherically , which means the energy of the beam is dispersed in a wider and wider volume . We see the lighted objects by the reflection of light from them. At a distance where the beam energy per cubic centimeter is very low, there is not enough light reflected by objects, to reach our eyes and be registered.

What you draw is the extent of the beam in reflecting from objects on the ground, as far as the energy density is large enough to reflect from objects (in this case the road and other cars). The beam itself that you observe is the reflected light from the air and dust in front of the car and mainly the tarmac, on which part of the light shines.

The light from the cars' headlights only traveled a few feet in front of the cars but also traveled thousands of feet to the airplane I was on?

The light from the cars' headlights traveled potentially very far, but only near the lens was the intensity high enough for you to see the reflection.

Any object that fell past that distance would have probably looked dark to the driver.

Maybe, maybe not. Many objects would reflect strongly back to the driver, not upward to you.

how could I see the beam-light structure of the light, if the light is able to be seen by an observer in any direction?

First, the lens on the headlight is directing it strongly in certain directions. The headlights are not as easily seen from the side as they are from the front. This pattern of strong intensity is seen by you in the shape of the beams to the front.

Second, as the light spreads out from the lens, it becomes less intense with distance, After it is below a certain intensity you can't easily see the reflections from it any longer. This sets the forward edge of the beams you saw.

Some light from the headlights is hitting in other locations, and some of that light is even making it up to your eyes. But the intensity from those locations is low enough that it still appears as black to your vision.

I just want to add one thing to BowlOfRed's answer.

Any object that fell past that distance would have probably looked dark to the driver.

For an object lit up by the headlight to be visible in the plane, the intensity I must be bright enough to see. Light from the headlights spreads out and hits the object. Reflected light spreads out too

To be visible to the driver,

Objects will only be visible to the plane if $x_0$ is very small.

Not the answer you're looking for? Browse other questions tagged electromagnetism optics electromagnetic-radiation visible-light or ask your own question.

4
At what distance could you see andromeda with the naked eye?
4
How do we know that time dilation applies to objects other than light?
38
Will we ever be able to view the past?
1
Would a camera that only takes light at 90 degrees work?
1
Can we see through the central obstruction of a lens?
1
What if a spaceship going half the speed of light turned on its headlights in both directions?
1
Why don't we use orthographic viewing devices to see distant objects?