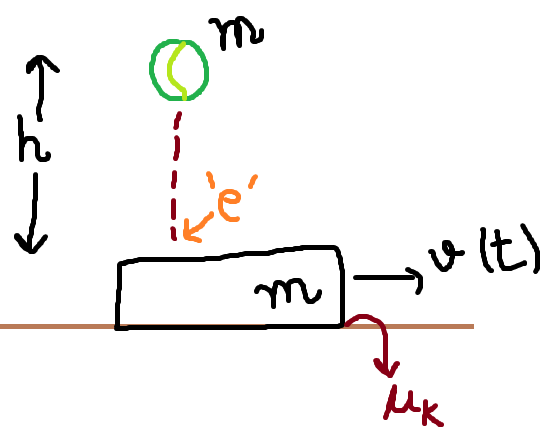 Suppose somehow a block of mass $m$ is moving on ground, and the coefficient of kinetic friction between the block and the block is $\mu_k$. If I drop a tennis ball(of same mass) on it from a height, say $h$ and it bounces back, coefficient of restitution being $e$ for the collision, I need to work out what effect would this have on its velocity, which was say at the time of collision equal to $v(t_0)=v$. The speed may or may not be changing due to everything else, but the change the collision would cause is what I want to find.

My view is that, at the time of collision, when the ball and the block are in contact, at that time ($t_0$), the normal reaction to the block will become $2mg$ instead of $mg$, which would change the kinetic friction at that time.

We say there is no change in momentum as impulse is due to opposite and equal magnitude forces. We say nothing about time. But here that time of contact is needed so that change in friction somehow changes the velocity.

Otherwise there is no extra change and so horizontal velocity shouldn't be affected by the collision. Does the velocity change due to collision?

Thanks in advance.[NO ROTATIONAL EFFECTS]

The kinetic energy the ball has when it hits the block is $mgh$. We have the relation:

This can be rewritten:

Which means the downward momentum of the ball is:

The block will excert a force on the ball to cancel this momemntum and give it a momentum of $e\cdot p$ in the opposite direction:

This will require a corresponding increase in the normal force on the block and thereby in the friction force:

The change in moementum of the block will be:

I have not included the extra force due to the weight of the ball or due to giving it a horizontal velocity component or spin, but these are likely to be small.

1st: you must take care that friction is a impulsive force and momentum never remains conserved when $f$ changes.

As,the momentum and energy both are not conserved , it is difficult to comment on the further motion of plank.

Not the answer you're looking for? Browse other questions tagged homework-and-exercises newtonian-mechanics forces momentum classical-mechanics or ask your own question.

6
finding angular velocity and regular velocity when bouncing off a surface with friction
0
Equations for a collision between two particles
1
Force to deflect ball colliding with wall
1
A question regarding the coefficient of restitution
3
Effect of velocity upon kinetic friction
0
A hypothesis based on the principle of conservation of momentum
2
Why is tangential particle momentum conserved in a collision?