What exactly is center of mass?

I though I understood this concept but the more I learn advanced topics like torque, momentum, work, the more I realize that I have fundamentally misunderstood it. My original, theoretical line of thinking was that COM was that point on object or somewhere outside it where equal amount of mass was distributed that surrounded it from all sides of the space. I though that since there was equal mass on all sides around that point of COM, that this was the reason why you have transnational motion instead of torque (since there is equal parts to supply inertia all around it, so that if inertia is overcome the whole object moves in unison) or that this was reason why when you balance object on COM it doesn't not fall under influence of gravity. Now after much research I have come to realize that this is not the case. In fact, I saw example where cutting an object along COM need not divide it into equal parts.

So now with this stated, my question then becomes that what exactly is COM? How come it is deemed as if all the mass of the object is concentrated in that single point? I mean, COM ( if you try to locate it physically on a object) is still an atom/atoms of certain mass and position, so all the mass is not really concentrated in it, is it? Also why is COM considered as that special point whre putting force on it produces translation motion instead of torque? Has it got to do with the distribution of force through the rest of body of an object? Is COM that point where if you apply force, that is equally distributed to rest of the atoms of the body of the object, no matter how far those atoms are from the COM? Conversely, does applying force on any other point on the object beside COM mean that that force is not equally distributed to the rest of the body, which then produces torque instead of transnational motion?

I know these are lot of question, but if anyone can provide some theoretical, intuitive explanation, instead of mathematical, I would greatly appreciate it.

One of those nice properties that you have pointed out is that it behaves as if all the mass of the object was concentrated there. What does that mean? Consider an extend rigid body like a bat. If I was to toss the bat up into the air, each point on the bat is going to translate and rotate at the same time, and in general the motion of each point will be rather complicated. However, the centre of mass (which you can imagine to be a special point painted on the bat) will trace out a nice parabola. If we were to instead throw a point particle with the same mass as the bat with the same initial velocity, it will trace out the exact same path as the centre of mass of the bat. In other words, the motion of the bat can be broken down into a translation of the centre of mass, and a rotation about the centre of mass.

However, for concreteness, you can imagine that for the donut shaped object, the centre of the donut is filled by a imaginary substance that has no mass but is perfectly rigid. Then, if you were to try and accelerate the object by applying a force there, the object will translate without rotating.

Here's an intuitive explanation for your other query. Consider the setup in the picture (a rod), which can be approximated crudely as 3 balls joined by two springs. If I were to give the centre ball a flick, then it will start moving forward and drag the other two balls along, but because of the symmetry there is no rotation. On the other hand, if I weas to flick the ball on the right, then it will start dragging the balls on the left along with it, but it drags the one closer to it more than the one further from it, so the whole thing starts to rotate. 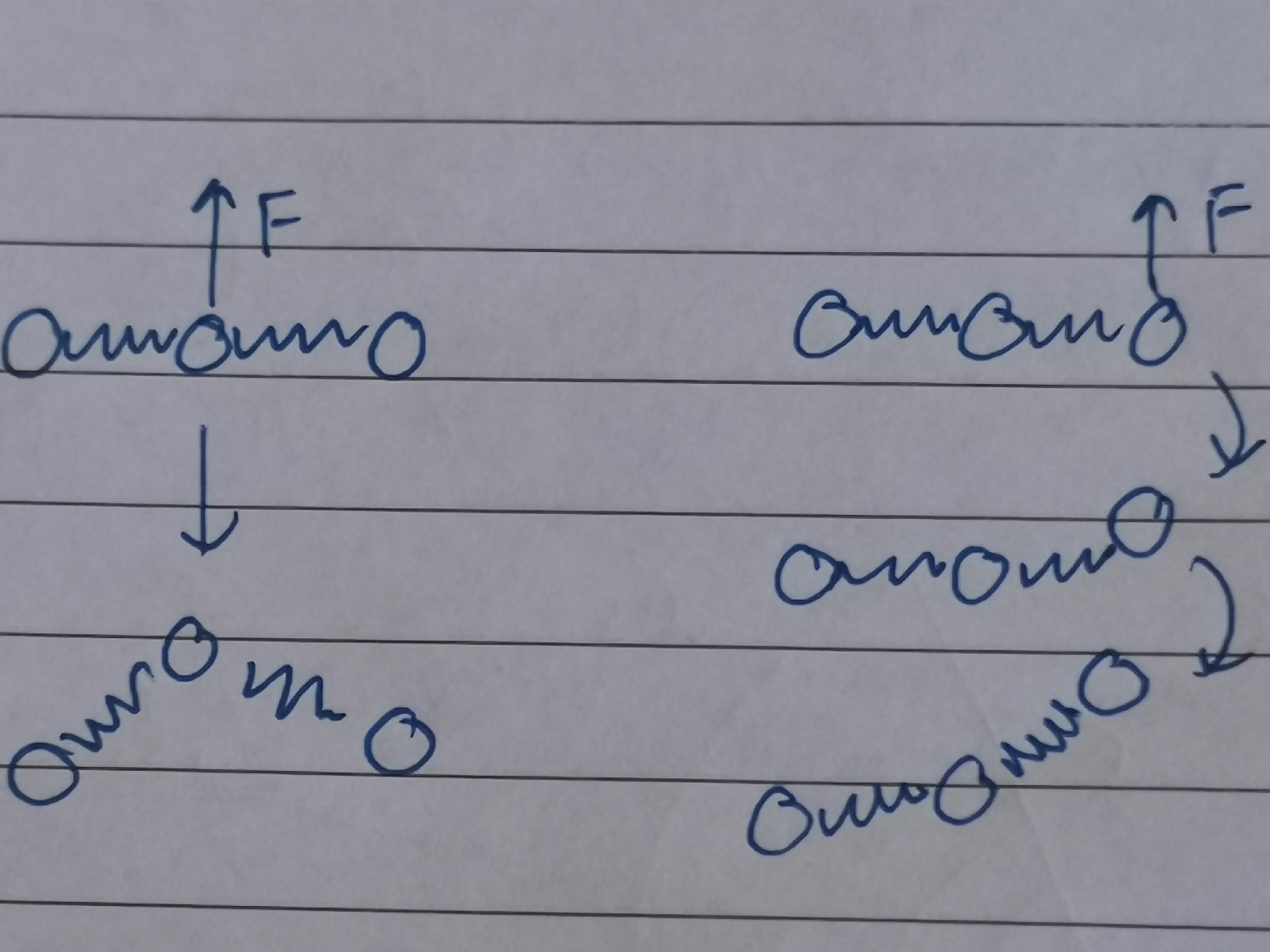 The position of the center of mass is:

and from here it is straightforward to see that there will be no torque in a uniform force field. The total torque will be:

which is zero if the center of mass is at the origin.

It is an imaginary point, if the object were hollow it would be outside the mass of the object, but if you calculate the torque about that point (the origin of coordinates does not need to be on the object itself), it still will result in a value of zero.

The individual forces are applied on the different parts of the body, not in the COM, it only looks as if it were applied in the COM for some purposes, like in the result above: the total torque is equivalent to all forces being applied to the COM.

I would start by giving an example that can be found in elementary books (Introduction to Mechanics Klepner & Kolenkow ).

Consider a Bola which consists of three balls of stone or iron connected by thongs. The gaucho whirls the bola in the air and hurls it at the animal. What can we say about its motion?

Since the constraining forces depend on the instantaneous positions of all three balls, it is a real problem even to write the equation of motion of one ball. However, the total momentum obeys the simple equation :

This equation represents an important first step in finding the detailed motion. The equation is identical to that of a single particle of mass $M$ with momentum $\mathbf{P}$. This is instinctively clear to the gaucho when he hurls the bola; although it is a complicated system, he need only aim it like a single mass.

Now If we are concern with the exact position and rotational motion of each ball, treating the problem as a single mass may not be the best idea. But if we are just concern about the overall motion of the bola then the concept of single might be a good idea. This single example can not tell you the importance of the center of mass but It gives the overall idea.

my question then becomes that what exactly is COM?

The exact definition of the center of mass can found here.

How come it is deemed as if all the mass of the object is concentrated in that single point?

It's not we are going to concentrate the whole object at a single point. I would rather say, The replacement of a complecated system like bola to a single mass which tells you the overall motion of the system. Now We never confuse ourselves about How we replace or how we can assume a single point with mass like of planet Because that doesn't matter here We are not concerned with the internal or atomic structure or stability of these things because this doesn't affect the motion.

why is COM considered as that special point where putting force on it produces translation motion instead of torque?

We of course not going to detail of it. But this theorem alone give idea of imporatance of center of mass.

All other question are more like a misconception that should be clear from above. Again center of mass is replacement of complicated mass distribution to simple point mass when we are not concern with rotations.

In physics, the center of mass of a distribution of mass in space (sometimes referred to as the balance point) is the unique point where the weighted relative position of the distributed mass sums to zero. This is the point to which a force may be applied to cause a linear acceleration without an angular acceleration.

For the rest of my answer, I will focus on rigid bodies.

Also why is COM considered as that special point whre putting force on it produces translation motion instead of torque? Has it got to do with the distribution of force through the rest of body of an object?

Is COM that point where if you apply force, that is equally distributed to rest of the atoms of the body of the object, no matter how far those atoms are from the COM?

Each particle will have the same acceleration (because pure translational motion), so yes, the force must be distributed to EVERY particle in the rigid body. Not sure what you mean by equally -- do note that more dense parts of the object (where mass is greater) will need a greater force to be accelerated. However, if the object has constant density, then yes, the force will be distributed equally.

Conversely, does applying force on any other point on the object beside COM mean that that force is not equally distributed to the rest of the body, which then produces torque instead of transnational motion?

When a body rotates, not all its particles will have the same velocities, hence the rotation. Therefore, the force will not be distributed evenly -- some particles will feel greater forces than others, such that each point experiences a different acceleration, which is why the body will rotate.

As for your question about cutting a ball through its COM: It can be cut in parts of equal masses, but that depends on the axis through which you cut. See this post for more.

Not the answer you're looking for? Browse other questions tagged newtonian-mechanics forces reference-frames rotational-dynamics torque or ask your own question.

5
Acceleration of Center of Mass in Rotational Motion
1
Center of Mass frame
6
Rotation and center of mass -- A collection of common doubts
2
Why do vehicles with a higher center of mass roll more easily considering that they have a higher moment of inertia?
1
Centre of mass of particles
0
Do objects rotate around their center of mass or not?
12
Why do object rotate at all?
1
What is the distinction between work done by torque and force about an axis other than centre of mass?