On the Eigenstate Thermalization Hypothesis: what does "energy eigenstates are thermal" mean?

I'm trying to understand what exactly is the ETH, and miserably failing. Here's what I'm reading everywhere: isolated systems are supposed to thermalize, hence "forget about their initial condition", but the infinite time average of an observable $O$ is

where $|\psi\rangle=\sum_\alpha c_\alpha |\alpha\rangle$ and the $|\alpha\rangle$ are the energy eigenstates. This is a problem, because it means that expectation values of observables depend on the initial conditions at all times. A solution to this is supposing that the energy eigenstates are thermal, the trouble is, in every paper on the subject people seem to avoid explaining exactly what they mean by thermal. Most people say something like

where $\langle O\rangle_{\mathrm{mc}}$ is the microcanonical average. I have two main problems with this

Other people say something I can understand a little better, they say that if $O$ is local on a region of the lattice $A$, then the average must look like a Gibbs ensemble thermal average.

but this has the same problem as before, the time average still depends on the initial conditions. Moreover, I don't understand what is the difference between considering microcanonical averages and Gibbs averages.

TL;DR: what does "the energy eigenstates are thermal" mean?

I find the best way to introduce people to the topic is the intro paragraph of this paper, Thermalization and its mechanism for generic isolated quantum systems:

If we pierce an inflated balloon inside a vacuum chamber, very soon we find that the released air has uniformly filled the enclosure and that the air molecules have attained the Maxwell velocity distribution, the width of which depends only on the total number and energy of the air molecules. Different balloon shapes, placements, or piercing points all lead to the same spatial and velocity distributions.Classical physics explains this ‘thermodynamical universality’ as follows: almost all particle trajectories quickly begin to look alike, even if their initial points are very different, because nonlinear equations drive them to explore the constant-energy manifold ergodically, covering it uniformly with respect to precisely the microcanonical measure. However, if the system possesses further conserved quantities that are functionally independent of the hamiltonian and each other,then time evolution is confined to a highly restricted hypersurface of the energy manifold. Hence, microcanonical predictions fail and the system does not thermalize.

So basically systems that thermalise are also ergodic (they explore the available phase space so that their spatial and temporal averages look the same and are independent of the initial state), but if there are conserved quantities then these systems would be integrable systems that cannot thermalise and that remain limited to a subspace of the available phase space.

The ETH essentially says that you do not need to know exactly what state $|\Psi\rangle$ the system ends up being, because to compute the average of an operator $\langle \hat A \rangle$ you can just the statistical mechanical ensemble: $$ \langle \Psi |\hat A|\Psi \rangle = \langle \hat A \rangle_{\text{ensemble}}. $$

Now from this you can ask all your quantitative questions about initial conditions etc. Which cannot really be answered because the ETH is a hypothesis with no definite proof (yet).

However, if you read the paper I link above, they do provide an explanation on how the system "forgets" about the initial conditions. They claim that an initial state in quantum mechanics is actually a superposition of thermal eigenstates, and that it's only the coherences between the latter that make it look like "non-thermal". With time, dephasing causes these coherences to wash away giving you a thermal state: 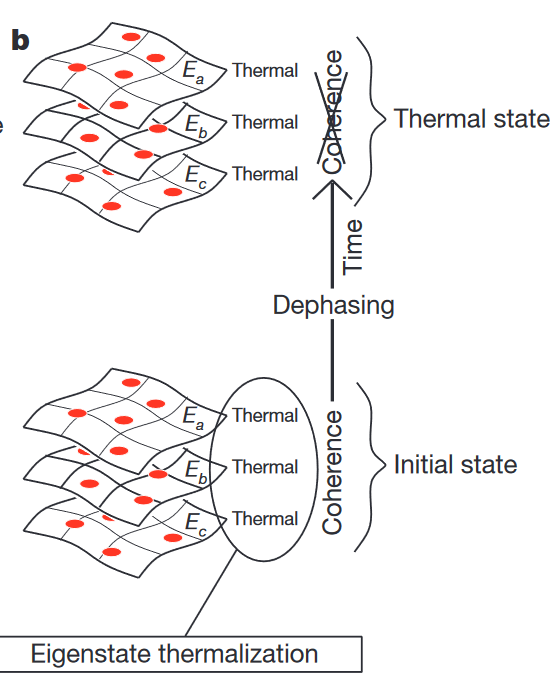 They provide numerical examples (both for thermal and integrable systems) along with a qualitative discussion of how the coherences tend to 0 because the off-diagonal entries of $\hat A$ end up being much smaller than the diagonal ones: $A_{\alpha \beta} \ll A_{\alpha\alpha}$.

I conclude by saying that the ETH rose to prominence with the advent of disorder-induced localised phases of matter, like Anderson localisation and Many-Body localisation (MBL) where thermodynamics does not work and hence all the usual phase-transition tell-signs fail. The ETH here has been proven to be a good discriminant between a thermal (ETH works) and localised (ETH fails) state.

Not the answer you're looking for? Browse other questions tagged quantum-mechanics statistical-mechanics condensed-matter many-body non-equilibrium or ask your own question.