I am currently studying electricity in my physics class, and am really confused about electric potential in a uniform electric field, like the one pictured. 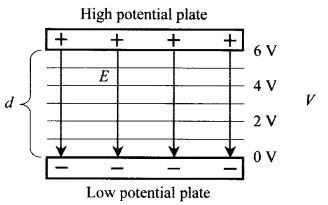 The equation for electric potential is V=kq/r

Only for a point charge.

so as a positive test charge gets closer and closer to the negative plate, wouldn't the electric potential be a huge negative number, because the radius is decreasing and the plate is negative? Please help me understand!

If you consider point charges then they cause discontinuities in an electric field (eg: potential where they are located r=0, is a blow-up) however if you have a smooth distribution of charge, there are no such blow-ups.

, how come many textbooks say that the electric potential at the negative plate is zero.

The only quantity related to potential that is ever relevant to an electrostatics problem is potential difference. That is the difference between potential between two points. Because of that it doesn't matter where you set the potential to be zero.

Concerning the huge negative number: no, while the potential of a point charge approaches infinity, the potential is finite at a charged surface. This is because the electric field is constant near the surface. If doubt that, I'm sure it will be made clear to you soon as your course progresses.

The fact you can not define the potential at a point. All you can do is to define a potential difference between two points. In your figure, They have taken zero potential at the negative plate, and relative to this point they have written the potential at other point.

And this make sense, How? We know that charge will flow from high to low potential and thus If you put a charge near positive plate it will go towards the negative plate. That's exactly you would expect.

You are correct. Strictly the potential of a stationary pont charge is kq/r so the potential at infinity should be zero. However, you can add a constant potential to any system without physical consequences. This allows you to redefine the potential such that it is zero at one of the plates.

allow me to explain a couple of concepts.

To calculate electric potential, we need a point of comparison, where we assume the potential is 0. Usually this is taken as infinity. However, it's fairly common to consider an actual point (in this case, the negatively charged plate) as a 'zero potential' point. We then just measure the electric potential of other points in comparison to this 0 potential point.

Another example: when you want to measure the length of a line drawn on a page by a pencil, you bust out a ruler. You place the 0 mark at the beginning of the line, and you check how long it is by seeing where the line ends with reference to the 0 mark. if it ends at 15cm, the line is 15cm long. If instead we placed the 5 cm mark at the beginning, the line would end at 20cm. we now have a different point of reference, but the line is still the same length See how that works? you need a point of reference to measure things.

In the arrangement that you have shown in the photo, a positive charge +q placed near the positively charged plate would have a high electric potential, as it would be strongly repelled by the plate. if it were able to move, it would move away from the plate at a high velocity. It would move in the direction of the negatively charged plate, which for +q would be at a lower potential.

Another thing you must know is that electric potential is not kq/r for all charges. V = kq/r is only true for a point charge q, and is different for different charge distributions. In the photo that you have displayed, the charges are distributed on charged plates. Here kq/r cannot be used to calculate the potential due to the plates. You would have to use V = - ∫ E. dl

If this helped, remember to please upvote and tick the answer :)