Well, one of the "mantras" of General Relativity is:

Einstein Field Equations concerns about the local geometrical structure of spacetime (the metric tensor) and tell you nothing about the fixed undelying topology of spacetime.

One way to study this fact is in the realm of Spherically Symmetric Wormholes. Specifically, when we consider both Black Hole and White Hole solutions and a kruskal local chart, we can produce (at Kruskal time $v = 0$) a non-traversable wormhole known as the Einstein-Rosen Bridge. Furthermore, we have Morris-Thorne Traversable solution which acts as a remedy to the disease of non-traversability of Einstein-Rosen Bridges.

In $[1]$, Thorne works out the Schwarzschild Solution and the realization of the Einstein-Rosen bridge (or Kruskal Throat) and then show us two figures: 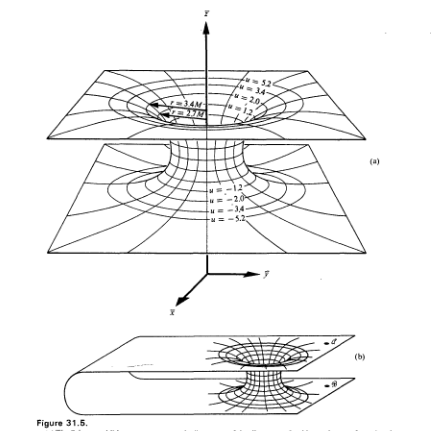 In fact he then wrote:

"(b) An embedding of the Schwarzschild space geometry at "time" $v = 0$, which is geometrically identical to the embedding (a), but which is topologically different."

My difficult here is how can I show formally the differences between $(a)$ and $(b)$. I mean, to construct $(a)$ you must to use an specific embbeding procedure: using cilindrical coordinates. But the whole discussion here is about topology. Then I would like to ask:

What is the topology of (b)?

You need to compare the topological data of these two manifolds. In this particular example they have different homotopy group, i.e. in the second example you do not need to cross the throat to get into the other side but in the first one you do need cross the throat.

Not the answer you're looking for? Browse other questions tagged general-relativity black-holes spacetime metric-tensor topology or ask your own question.