Can inelastic scattering still give rise to diffraction?

I am having a conceptual difficulty reconciling inelastic events and diffraction, particularly whether or not you can have inelastic diffraction. 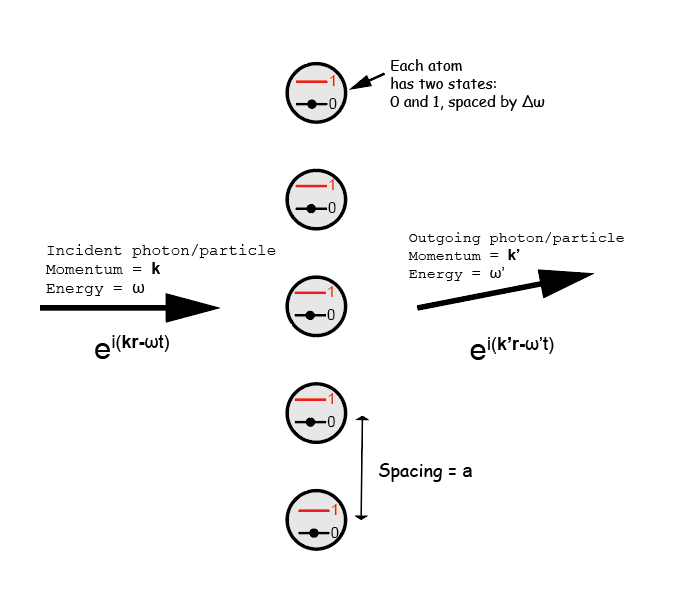 Now let's say you send an planewave made of photons (or neutrons, doesn't really matter) with momentum $k$ and energy $\omega$ onto this array of atoms and look at the scattered waves. The incident wave will be (elastically) diffracted by transferring momentum $k-k'=q=2\pi n/a$ to the atoms, which gives rise to diffraction peaks. It is important that while the momentum of the incident waves changes, the energy does not (i.e. elastic scattering).

But now consider the scenario where the incident wave of photons inelastically scatters, promoting a single atom from $\vert 0 \rangle$ to $\vert 1 \rangle$. These photons will lose energy, so $\omega-\omega'=\Delta \omega$. My question is, will these inelastic scattered photons that excite atoms from $\vert 0\rangle$ to $\vert 1 \rangle$ still form a diffraction pattern because the atoms are periodically spaced by $a$? one could distinguish these waves with the elastic scattered ones by using a energy-discriminating detector, for example.

Intuitively, I would expect the inelastic scattered photons to still form a diffraction pattern, since the atoms form a perfectly spaced array after all. However, if I look at Fermi's golden rule for scattering, it tells me that the different inelastic scattering processes don't add coherently (i.e. the phase doesn't matter between different inelastic scattered events even if they involve the same energy and momentum). Apparently this will mean that the inelastic photons do not form a diffraction pattern. How do I reconcile these two viewpoints?

This was an interesting question that really made me think, so thanks for asking it. Your question ultimately maps onto the problem of diffraction from a solid that possesses a zero-momentum optical phonon. (Note: it is easy to generalize what I say below to non-zero-momentum phonons as well, but in that case it is obvious that the scattered particles would get redirected to regions of the screen between diffraction peaks. Therefore, it's not important to consider that case here.)

The answer then has two parts: one is that the inelastic scattering will decrease the intensity of the diffracted peaks in a way reminiscent of the Debye-Waller factor in a solid, but will not wash away the diffraction peaks completely. Depending on how large the matrix element is in the Fermi golden rule expression, the diffraction peaks will correspondingly decrease in intensity. The analogy to the solid with q=0 optical phonons would be that the larger the amplitude of the phonons, the more substantial the decrease in the Bragg peak intensity.

The second part of the answer is whether you will observe this decrease in the intensity. If you suppose that you have an energy discriminating detector that could tell the difference between the elastically and inelastically scattered particles, then you definitely would see a decrease in intensity because of the aforementioned analogy to the Debye-Waller effect.

Beyond the Debye-Waller effect, which I think is what your question is getting at, is if you will see a "diffraction pattern" if we reject the elastically scattered particles and only keep the inelastic ones. The answer would still be yes. Again, the analogy to the solid is apt here. Since the scattering particle can transfer momentum and energy to the solid only at a specific momentum values, those of the reciprocal lattice vectors, you would still get intensity at the points on the screen where you formerly had diffraction peaks in the elastic limit. Stated otherwise, you can still see a zero-momentum phonon in an inelastic scattering experiment at all reciprocal lattice points.

Now that we've considered the elastic and inelastic channels separately, I think it's relatively easy to see that you'll still have a diffraction pattern. The last question is whether the elastically and inelastically scattered particles will add coherently or incoherently. I need to think further about that, but my gut tells me that they'll add incoherently since they would arrive at the screen at different times (i.e. you would be able to tell whether the particle scattered elastically or inelastically, and therefore they cannot interfere.)

All of this is to say, yes, you'll still have diffraction.

Inelastic scattering in these context is the Raman scattering suggested by the question: an atom absorbs a photon and emits a photon of lower frequency: $$ \omega ' = \omega - \omega_{10} $$ Just as in the case of Rayleigh scattering, these photons will have random directions and phases, but they will also have different frequencies. Again, the photons will interfere, but due to the randomness introduced by the scattering, the result will be some homogeneous average, rather than a diffraction picture.

Elastic and inelastic processes
Neither of these two situations is described by the Fermi golden rule. Although the two processes described above are termed elastic and inelastic, we haven't included yet any irreversible thermal effects and/or energy loss. Indeed, if we considered a wave function for the system photons+atoms, the energy of the system would be conserved and we could potentially expect restoration of the coherence, known as wave function revival in the context of Jaynes-Cummings model (simplest model of a photon coupled to a two-level atom). Irreversible loss of overall coherence could result only when the number of atoms/photons tends to infinity, i.e. in the thermodynamic limit.

A thermodynamic limit is implied in the Fermi golden rule, since all its derivations invariably involve transitions into some kind of continuous spectrum, so that they go only in one direction, rather than exhibiting the Rabi oscillations. This point is however often made rather vaguely, since the rule is introduced in introductory quantum mechanics courses. It is usually reviewed again (sometimes without naming it) in discussions of spontaneous emission and the context of lasers, or elsewhere.

Dephasing and decoherence
We considered above two situations:

These two types of situations are often referred to as dephasing and decoherence.

Not the answer you're looking for? Browse other questions tagged quantum-mechanics scattering diffraction fermis-golden-rule or ask your own question.