Spacetime around a Black Hole

Space-time, as you said curves around a body in space, and the greater the mass of the object the greater the curvature, this, in the simplest way can be described using light cones and Schwarzschild. Black-holes create many odd situations in space in which odd events take place. Black holes, although often though of as places in themselves, they have their own geography. There are two checkpoints to look for when one falls in a black hole these are called, the Horizon and the Singularity. The Singularity is the easiest to explain, in terms of description. 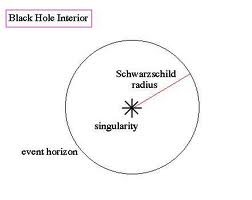 As you can see the singularity is the center point of the black hole, it also shows us the relative place of the Horizon, our second checkpoint. The Horizon is defined by the size of the black hole. The calculation in how to work out the Schwarzschild radius, (where to place the Horizon) is stated below:

The important thing about the Horizon is that NOTHING SPECIAL happens if one were to pass it, on e would feel no special sensation and may not even know they had passed the horizon unless they had a way of measuring it. The only interesting thing that happens at the Horizon is that when someone else watch one they would see an odd situation, but that would be going on to a completely different discussion point. The Singularity is the only place in which one would feel anything, and that thing would a infinite tidal forces, ripping one apart because gravity would be infinite. This is where we come back to your original question, gravity is NOT a force, it is only talked of as a force so that it is simple to imagine, but a curvature of space, and therefore curvature would be infinite. This is only at the singularity though, at the horizon the curvature would not be quite as intense. If you want to know the exact equation then look up Ricci/Riemann Curvature equations as I have chosen to describe this is in a non-mathematical sense. Below I have left a diagram of a black hole to help you visualize it.

I hope I helped and did not ramble too much. If you found my explanation helpful and not too boring then look up more and even try listening to Leonard Susskind, or Brian Greene, both really interesting and have videos on YouTube. It is really interesting so dive as deep as you can, then go even deeper!

General Relativity allows black holes of any size (though making a small one might be hard or worse than hard). So as a thought experiment that means that you can consider a small black hole that curves spacetime exactly as much as the sun does.

This black hole would be much smaller than the sun, but to us out here spacetime would look the same (except we wouldn't see the sun, we'd just orbit a small black hole surrounded by optical lensing). We'd go around it in one year just like always, Venus and Mars and all the other planets would also continue to orbit at their usual rates because spacetime out here and out there would be exactly the same.

The only real difference would be if you approached the black hole so close that you reach the place where if it were the sun you would be at the surface of the sun. If you were at the sun and entered it would be hot but it would start getting less curved as you went deeper until at the center of the sun it would be very hot, hot enough for fusion to occur but there would be hardly any curvature.

So Venus goes through a region with more curvature and Mars goes through a region with less curvature. If you approach the black hole as you got to where the sun would have been then it just keeps getting more curved because you haven't reached the black hole yet (it is much smaller than the sun). You would continued to get more and more curved the closer you got to the black hole. Even worse the part of you that is just a little bit closer to the black hole will see a much more curved region than the part of you that is a slight bit farther away, so you'll feel stretched from feeling two different curvatures, and that feeling is an actual real effect. It will literally rip you apart if you get too close.

Not the answer you're looking for? Browse other questions tagged general-relativity black-holes spacetime curvature or ask your own question.

0
Spacetime curvature around a black hole