Tin can Telephone going around corners?

Recently I decided to make a communication system throughout my house (electronic free) so I decided to make a system of tin-can telephones. I realized quickly that it would be difficult, though, because they don't corner well (or at all). So my first idea was to make what I called 'repeaters', and you would put one on the corner. It was just another can, but it had two strings attached, so it would forward the vibrations. That was very difficult to make. I also wanted to make hubs that you could connect to, so multiple people could talk to each other. So I settled on just a loop of string that would be kept tight. But the issue with that it has to do this:

It has to go way out past the corner, and then come back, which is a big waste of material, and it lowers the quality of the sound. So is there a way to do something like this but make it go right around the corner? I don't want to have to set up a chair or anything, because I have this running along the floor (it's sort of out of the way). Maybe I could prop the loop away from the wall a bit, then hook up? Thanks in advance!

P.S. If you're wondering why I'm doing this rather than just walking into the other room, allow me to elaborate: Sometimes when I'm really bored I like taking some simple experiment (e.g. a pinhole camera), and taking it to a crazy level (e.g. turning my room into a pinhole camera). And while right now I just have the cans going around a single corner, I'm planning to elaborate and spread to different floors.

The third can solution is probably the simplest. If you replace the end of the can with a thin membrane - like the surface of a drum - you should be able to transmit the string tension from the first string to a second string. See below. 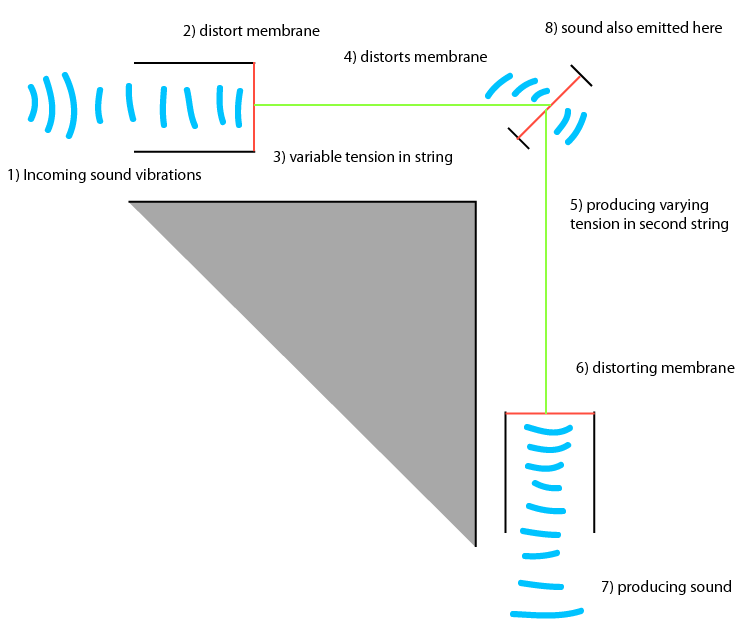 Alternately, it may still work if you replace the middle can with a short length of string attached to a heavy weight (see second figure). 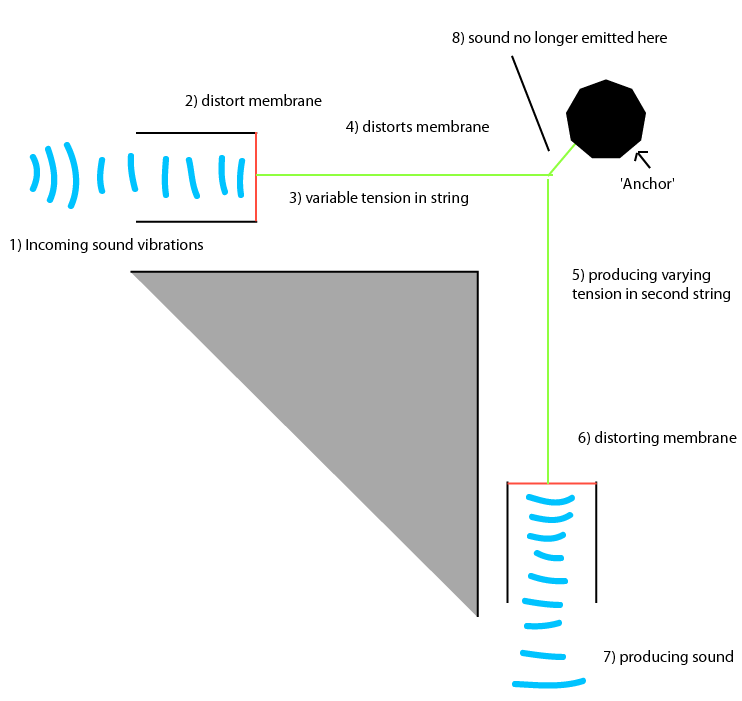 The most important thing in any proposed solution is that the entire length of the string needs to be in tension in order to carry sound. A string that is slack along any part of its path will be a very lossy signal carrier.

This is a general answer on the two issues you need to avoid. They are reflection and absorption. A simple enough point, but it helps you think about what to do about corners. If the string passes over anything a bit cushiony, such as wallpaper, that can absorb sound vibrations, then you are going to get absorption. So maybe try putting some metallic object between the string and anything soft that it rests on, or pass it over a metal hook.

Reflection will happen if you accidentally prevent the string from moving, or if your receiver is not well matched to the string (the technical term is impedance matching). To get the impedance matching right you probably need some trial and error on the type and size of cup.

3
Hearing sound around corners
36
Why can't you hear music well over a telephone line?
2
I made a tin can phone using a plastic slinky and paper cups. Why didn't it work?
0
Hearing sound when going supersonic
0
On which principle does string telephone work?
1
Bending notes on a tin whistle
6
Why do I hear street noise more clear on the higher levels?
8
How does a guitar work?
1
Why are traditional telephone lines limited to about 3-4 kHz bandwidth?