After that Tong calculate spatial distance: 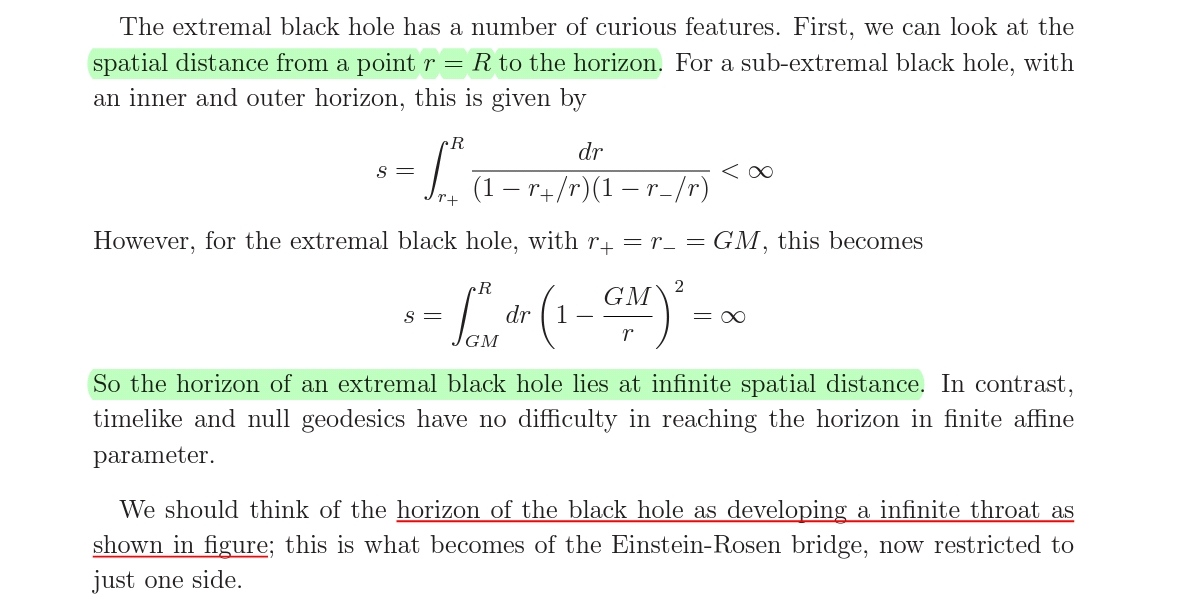 After that he concluded:

How understand this statement? Really, BH horizon in infinity? So BH is everywhere?

How to interpret this result? 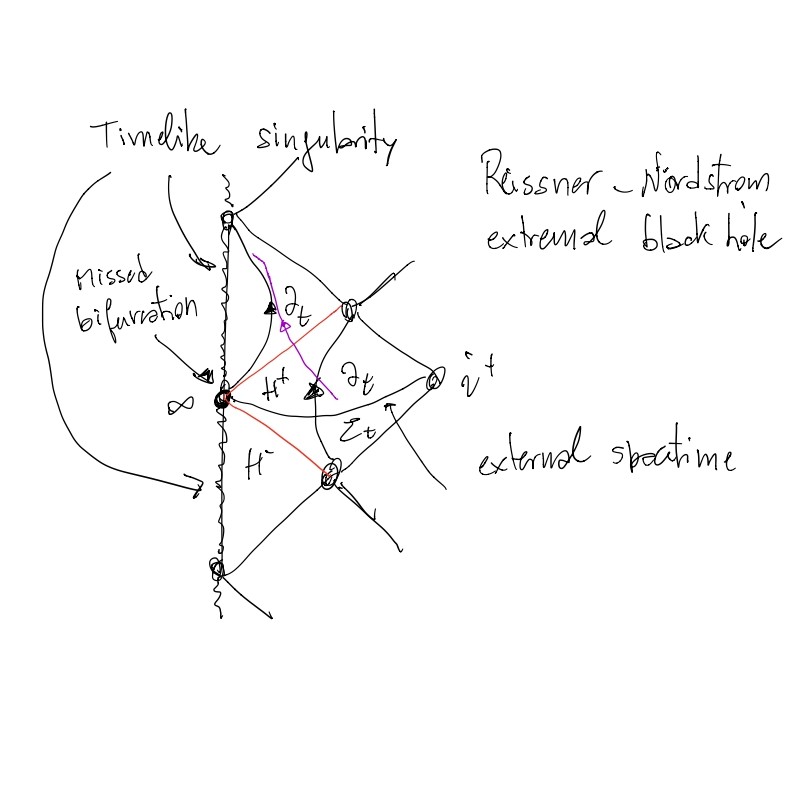 The text you quote is a bit sloppy but correct. A Carter-Penorse diagram could help to understand the structure of the spacetime.

A Killing horizon $H^+ \cup H^-$ is a null 3-surface separating the external spacetime from the region containing the singularity (which is timelike in the extremal Reissner-Nordstrom case as in the picture though a timelike singularity also appears for other types of also non-extremal black holes). It is made of the Killing time vector $\partial_t$ which becomes lightlike and tangent exactly to that surface. One is actually interested in the 2-spatial surface obtained as the intersection of the Killing horizon and a spatial slice $\Sigma_t$ orthogonal to the Killing time vector (which becomes the standard Minkowski time far from the horizon). This notion of space is natural, because thereon the spatial metric is stationary with respect to the Killing time (in the external region for standard black holes but in the whole spacetime for extremal ones). Usually this intersection called the Killing bifurcation, exists. For the standard Schwarzshild bh it is a spacelike 2-sphere. However dealing with extremal black holes, the said intersection is infinitely far from any point in the slice: the Killing bifurcation is out of the spacetime, it does not exist (that is one of the reasons why extremal black holes are claimed to have zero Hawking temperature). I indicated by $\infty$ that missed region in the picture.

There is an important remark however. The worldline of a massive particle (purple line in the figure) starting from the external region may cross the Killing horizon in a finite interval of proper time exactly as it happens for all non-extremal black holes. Another interesting fact: as the singularity is timelike a particle can avoid it after crossing the Killing horizon in the case of the extremal RN black hole I considered in the picture. That is impossible, e.g., in the Schwarzschild black hole but it is possible e.g. in the case of a rotating ("Kerr") black hole.

It means exactly what it says.

For any point outside the horizon, the distance to the horizon (as measured along a slice of constant $t$) is infinite.

Note that this statement depends on the choice of time coordinate, you can choose other coordinates for such an extremal spacetime such that the distance to the horizon at fixed time is always finite. (If you would follow a null curve, the distance would, of course be zero.)

Not the answer you're looking for? Browse other questions tagged general-relativity gravity black-holes metric-tensor event-horizon or ask your own question.

25
How is the logarithmic correction to the entropy of a non-extremal black hole derived?
18
Doesn't the Schwarzschild metric combined with Hawking radiation imply that nothing ever gets past the event horizon of a black hole?
3
Black holes and Time Dilation at the horizon
4
Hawking Temperature of the BTZ Black Hole
7
“Center of a black hole is a time”
12
Blueshift near the Schwarzschild BH horizon
2
Spatial dimensions inside the event horizon