This is known as a multipole expansion. Basically, when you are interested in the electric potential created by an compact assembly of charges, and you're looking at distances much larger than the spatial extension of the collection of charges, you can express the electric potential as a power series of $m_n/r^n$ (times some function of $\theta$ and $\phi$), with each $n$ corresponding to a successive "pole". In many cases, it is enough to only keep the term corresponding to the lowest non-zero $m_n$, as this will give you the asymptotic behaviour for $n\to \infty$.

$n=1$ is the "monopole" term. It is proportional to the total electric charge. Intuitively, if you have an excess of positive (resp. negative) charge $\delta q$ over the whole distribution, you can expect that the distribution of charges will mostly be seen at long distance as a point charge $\delta q$, because the field created by the other charges will approximately cancel out. Thus $V(r\to \infty) \simeq V_{\mathrm{monopole}}(r) = \frac{\delta q}{4 \pi \varepsilon_0 r}$.

For reference, this is the electric field created by two-point charges, which would correspond to the dipole term at long distances (at distances shorter than the separation between charges, the exact field depends on the exact distribution of charges). 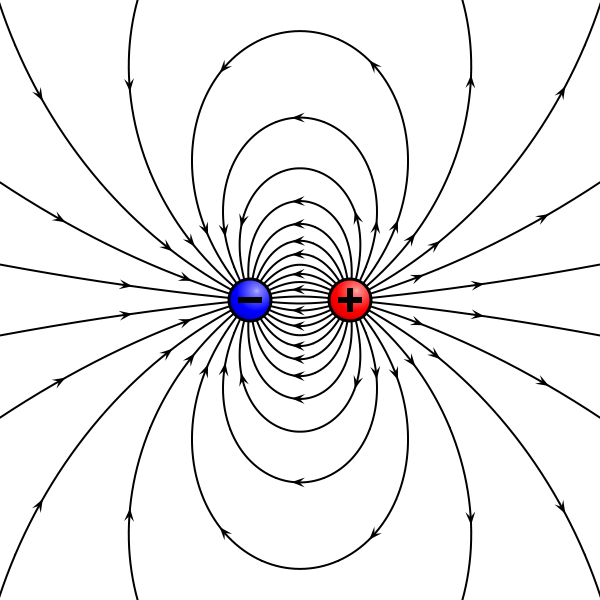 Not the answer you're looking for? Browse other questions tagged electrostatics electric-fields multipole-expansion or ask your own question.

0
Quadrupole moment of point charges?
2
Approximate point quadrupole as point charges
0
What is the meaning of electric potential produced by multiple number of point charges
0
Neutral conductor and charged insulator brought near each other
0
Does electrical field intensity and electric flux at a point depend on all the point charges (inside and outside) around a Gaussian surface?
2
Electric field on rim of uniformly charged disk
0
Potential energy of two point charges of opposite sign (exercise)