Where do virtual particles come from?

Do I understand correctly that for the existence of virtual particles, a single physical object is needed - a quantum field? And virtual particles are excitations of this field that fills all space. In this case, what are virtual strings, because in string theory there is no "string field" from which they could be born?

The virtual particles are not really existing objects. They are the entities, which emerge in the Feynman diagrams, when evaluating the amplitudes of a certain process in a perturbation theory.

There is a large program, led by Arkani-Hamed, Trnka, Cachazo, and other authors to define the scattering amplitudes without the need to refer to the spacetime and Feynman diagrams. The whole scattering is defined in terms of the canonical form, living on the positive geometry, such that all the particle poles correspond to the singularities on the boundary of this geometry. In this approach the notions of locality and unitarity are manifest.

The drawback is that, by far this theory is applicable in rather limit scope : $N = 4$ Super Yang-Mills theory, $\phi^3$ bi-adjoint scalar field theory, and some non-linear sigma-models and string theories.

String fields indeed exist. It is usually stated in introductory courses in string theory that string fields do not really exist because off-shell string amplitudes are incompatible with world-sheet symmetries.

Heuristic argument: I will give an example to illustrate how worldsheet symmetries force string states (via the operator-state map) to be on-shell.

Conceptual argument: See the excellent blog post Observables in quantum gravity or my answer to String amplitudes for finite times and string wave-functions.

What virtual strings are? Despite the arguments from above. It is actually possible to define string fields. Although not the clearest conceptual way, I recommend the discussion on second quantization in the book of Polchinski (chapter 9.6 in Vol. 1).

The answer to your actual question is that virtual strings are the off-shell strings that appear in finite time process in string field scattering amplitude computations.

For an overview see the talk developments in perturbative string theory.

@Nogueira Has correctly pointed that my rough argument just works for strings that scatter from infinity. In presence of $D$-branes my argument is no longer valid, off-shell string states can be exchanged between branes and the masses of stretched strings between $D$-branes are proportional to the separation between those branes (and in particular not fixed by perturbative dynamics).

One way of looking at it is that in any scattering event there is an amplitude for the strings to have a topology where for equal-time slices they seem to split and join. The intermediate strings are the virtual ones.

In this picture we may choose the time coordinate to point straight up, and so this would look like two incoming strings joining together to form a virtual string, who splits into two virtual ones, who join together, and split to two outgoing strings. 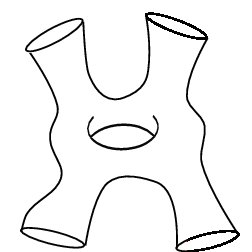 If you are already comfortable with the field-theory formalism, then you may view string theory a a field theory. This formalism is called String Field Theory.

Not the answer you're looking for? Browse other questions tagged quantum-mechanics quantum-field-theory string-theory virtual-particles string-field-theory or ask your own question.