Could evaporation of a liquid into a gas be thought of as dissolving the liquid in a gas?

As I understand it, evaporation is thought of as a phase transition from a liquid into a gas. Individual molecules get enough energy to break surface tension, and flung up into the gas. A gas that's saturated with water vapor can precipitate out when the temperature goes below the saturation point. e.g. dew.

Is it useful to think of this as the liquid dissolving in the gas, much like a solid dissolves into a liquid rather than thinking of it as two gasses mixed together? i.e. are these fundamentally related concepts, but just occurring in different states of matter? They seem rather similar in their behavior. Water at room temperature and under atmospheric pressure easily "dissolves" in air, but iron doesn't.

If not, why is it not thought of in this way?

I don't think that's a useful perspective to adopt. Fundamentally, dissolution (or solvation) involves particle of the solute being pulled away from the bulk and surrounded by particles of the solvent. Whether this occurs or not depends on how strong the solute-solvent intermolecular forces are relative to the solute-solute forces which bind the solute together. For a given solute under fixed conditions, different solvents will dissolve it more or less readily.

On the other hand, vaporization involves the atoms/molecules of the liquid gaining a sufficient amount of energy to leave the liquid phase. When this happens, the molecules become essentially free, and in particular they are not surrounded by a solvation shell like dissolved solute particles are. This process is not influenced very much by the nature of the gas which exists above the surface of the liquid, and would proceed even if there were no gas above the liquid at all.

Like J Murray, I'd say its not all that useful of a construct.

In particular, its worth looking at the difference between evaporation and boiling. Usually these are both considered "vaporization." It would be very difficult to consider boiling to be a form of dissolving the liquid into the gas, as it can occur within the body of liquid, far from any existing gas.

Vaporization can also occur without a gas at all. If you expose a liquid to a true vacuum, with "no" gas molecules present, the liquid will vaporize. In fact, for many liquids, like water, it will indeed boil, despite there being no gas to boil into.

It also obeys different sorts of behaviors. Consider the case where you have two different solids dissolving into a liquid. For the most part, their dissolution can be thought of independent reactions. However, in the case of two liquids evaporating into a gas, we must consider them combined, as each one's vaporization may increase the pressure of the container, which changes the vaporization properties of the other.

I think this idea is best illustrated by looking at solid-state solubility: that is, dissolution of solids into other solids. Below is an image of the iron-carbon solid solution phase diagram. 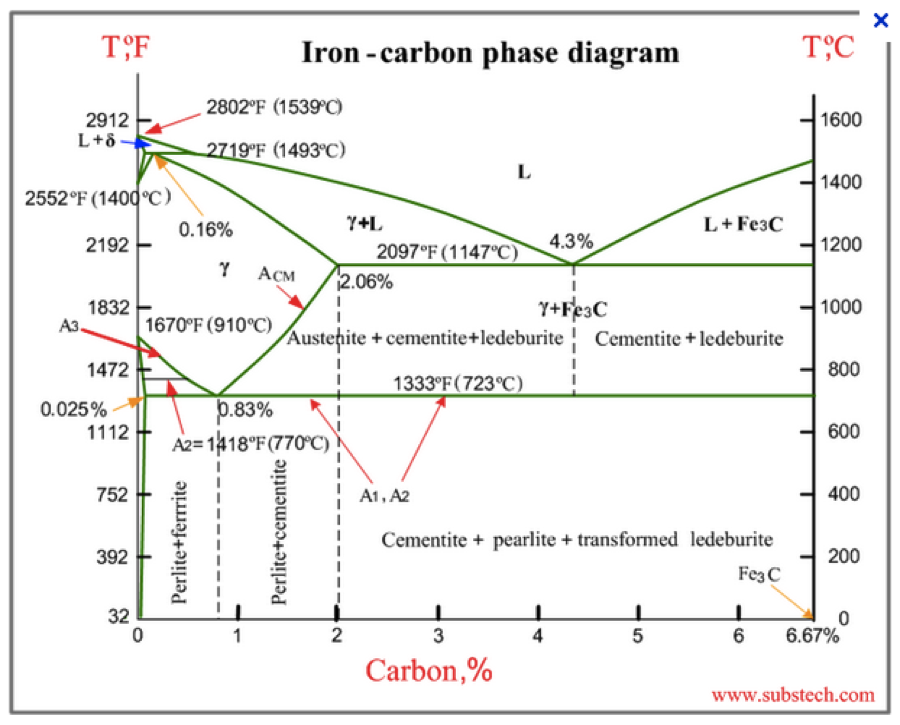 If you've only done introductory Chemistry you've probably only ever seen phase diagrams of temperature plotted against pressure. We can also consider the "concentration" of different chemical elements or molecules in our phase diagrams as well. Here, we have the carbon concentration plotted on the $x$-axis as a mass concentration. On the $y$-axis we have temperature. This is a fairly busy plot, but there are a few features worth pointing out.

For low carbon concentrations, carbon can dissolve completely into the iron structure: that is, carbon is soluble into the iron solvent. With too much carbon, the material becomes a mixture of pure iron and iron carbide (Fe$_{3}$C). The diagram cuts out at 6.67%-mass carbon, which corresponds to pure Fe$_{3}$C. At higher temperatures different structures become favorable, including different phases of solid iron (that is, different arrangements of iron atoms).

The point here is that solution of one compound into another is a phase change - that's why you can see similarities between evaporation and solution. When dissolving a solid into a liquid, the solid will dissolve up to the solubility limit of the system (incl. temperature and pressure), with any excess remaining as a separate phase. This is a general phenomenon with phase changes.

Now, if you're evaporating a liquid into a vacuum the system will also have some finite "solubility limit" (if you insist on thinking of it that way). Note that this is a property of the system, not the liquid or vacuum! If you add more compounds to the system, you are effectively adding more dimensions to your phase diagram (and more complexity to boot!). In general, things like vapor pressure are relatively insensitive to the chemical composition of a gas, so we can approximate them as being independent. There are exceptions! If the vapor reacts chemically with the gas you end up with another dimension in your phase diagram where you need to account for the (potentially 2-way) reactions within the gas itself and the overall equilibrium of the system.

To try and put it as simply as possible: you can think of a phase diagram as describing the chemical equilibrium of a system, in the broadest possible sense.

This is a topic that might be covered over half a course at undergraduate level. Hopefully this answer gives you some sense of where to look for further reading.

There are situations where that kind of formulation can be useful.

For example, in the oil industry, where vapor-liquid equilibrium is often modelled using the 'black oil' model.

The crude oil and natural gas found in reservoirs consist of a mixture of many different hydrocarbons. At any given temperature and pressure, a fraction of the mixture will be either in the gas phase or the liquid phase.

This model is extended in a similar manner to the vapour phase, where the gas is modelled as containing a certain amount of vaporised oil.

This isn't really dissolution in the same way that a solid dissolves in a liquid because it is a model of a complex mixture of many different chemical compounds, but it is a useful construct for the oil industry because the volumes of oil and gas, at a set of standard conditions, are the saleable product.

Not the answer you're looking for? Browse other questions tagged phase-transition gas or ask your own question.

27
Freeze water in red-hot container
11
Why doesn't the gravitational energy in this system of evaporating and condensing water violate the second law of thermodynamics?
1
Is water vapor in a metastable state at 1 atm and at room temperature?
1
Can I change solid into liquid, gas or solute by cutting again and again until it is a molecule particle?
1
Why are wet bulb temperatures so warm compared to a naive calculation?
0
In the evaporation process, will the temperature of both liquid and vapor molecules decrease?
0
Why liquids evaporate completely when heated at their boiling points?
0
Does evaporation do work on the surroundings?
0
Vaporization - phase diagram
1
Calculating time it takes to heat water in a microwave and the steam to evaporate