Is the nucleus smaller than the electron?

In the classical incorrect 'billiard ball' model of the atom, electrons are often drawn as smaller balls than the protons and neutrons in the nucleus.

So in essence my question really is, is the mass of the nucleus confined more tightly than the electron’s mass?

The question confuses the electron "cloud", which is really the probability for where an electron may be found, with the size of an electron. The electron is sizeless, which can either be taken to mean that it has zero size, or that size in the quantum domain is a meaningless quantity, depending on how one chooses to think of it.

The nucleus has a much greater mass, with less uncertainty in position. But the nucleus consists of a number of protons and neutrons, which themselves consist of quarks and gluons. The microcausality condition suggests that the quarks and gluons individually have zero size, but a conglomeration means that the individual quarks and gluons cannot be expected to be found at the same position. It is then meaningful to talk of the size of a proton or neutron or nucleus, referring to the differences in possible position of the individual quarks and gluons, although probably not in a very precise way. In any event, a discussion of size of a nucleus is very different from a discussion of the uncertainty in the position of a nucleus, and one can say that the size of the nucleus is much greater than the size of an electron.

The electron is defined in the Standard Model as a elementary particle, pointlike, with no size or spatial extension.

Protons and neutrons that make up the nucleus are on the other hand composite particles as defined in the Standard Model, and they do have spatial extension. Of course, these are made up of quarks, antiquarks, and gluons, (contrary to popular belief not just three, those are the valence quarks only), but in reality a sea of quarks, antiquarks and gluons. 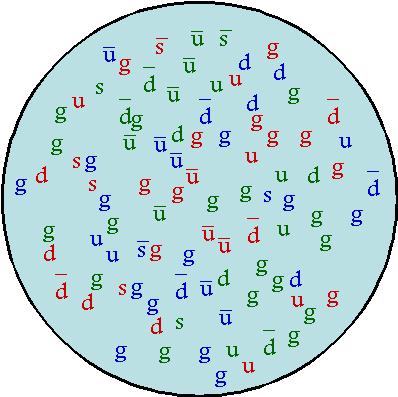 So based on this, it would not be correct to say that the nucleus, a composite particle, is smaller then the electron, a point particle, with no spatial extension.

However, what you are referring to, is the fact that, as per QM, the electron cloud is the physical manifestation of the mathematical description of something we call the probability distribution of the electron. This does have a spatial extension.

This is not correct. The electron is a point particle and smaller than a nucleon. A quantum particle should not be confused with a quantum wave function.

Not the answer you're looking for? Browse other questions tagged particle-physics electrons nuclear-physics neutrons protons or ask your own question.

7
Measuring nucleons using electron beams
2
Electron cloud of a polarized atom
3
Has a nuclear "neutron halo" been measured directly? Anything other than "breaks easily"?
1
formation of atomic nuclei from nucleons
3
Why are lighter nuclei dominated by $\beta$-decay and heavier ones by $\alpha$-decay?
3
How do we know neutrons and electrons are distinct particles on the same scale as protons?
0
Do magnesium-32 nuclei look like soccer balls?
1
Difference between $e^-$ capture and $ β^+ $ decay