Ask Question
Asked 1 year, 6 months ago
Modified 1 month ago
Viewed 192 times
-1
$\begingroup$
This question already has answers here:
Is there any way to measure the one-way speed of light? (9 answers)
Closed last month.

I just came across this problem that I didn't even know existed, how to measure the speed of light in the universe in a specific, given direction with respect to the universe or "in one way/direction only". Found it from here: https://www.youtube.com/watch?v=pTn6Ewhb27k

Anyway, to briefly state the problem, hypothetically apparently $c$ could be different in different directions with respect to say... whatever, any point really. And it could vary by as much as up to 1/2 the current accepted standard for $c$ in a given direction, as long as it goes infinitely fast in the exact opposite direction, as all attempts to measure it average each other out to $c$. Seems daft I know, surely there must be a way to tie some other fundamental constant(s) into knowing it exactly without regard to preferential direction. But it still seems to be an unsolved measurement problem as according to the above there's no known way of measuring it exactly.

Well after giving it a think last night I do believe I've come up with a way. It's dead simple and while it doesn't measure the speed of light "one way" it could be used to determine if the speed of light differed/had a preferred direction.

It only involves a pair of clocks, a beam splitter, and some mirrors. Generate a light pulse and start a clock from point A, send it off into a square pattern with mirrors, however just before returning the light back to A on the last turn use a beam splitter instead of a mirror to send the light to clock B. A will measure the light pulse returning at the speed of C no matter what, but B will return a different time if C has a preferential direction. Now here's the subtle bit, you can flip the entire device 180 degrees and if the preferential direction remains the same, you get a precise measurement of the preferential speed in the exact same way, and directly relative and predictable in comparison to the measurement of clock B pointing in the opposite way. All arguments about moving the clocks to cause time dilation or etc. are nullified, the measurements are only relative to each other and can only possibly be changed by you pointing the apparatus in a different direction.

To make it clearer here's a diagram showing the most extreme possible case, C being 1/2c in one direction and infinite in another: 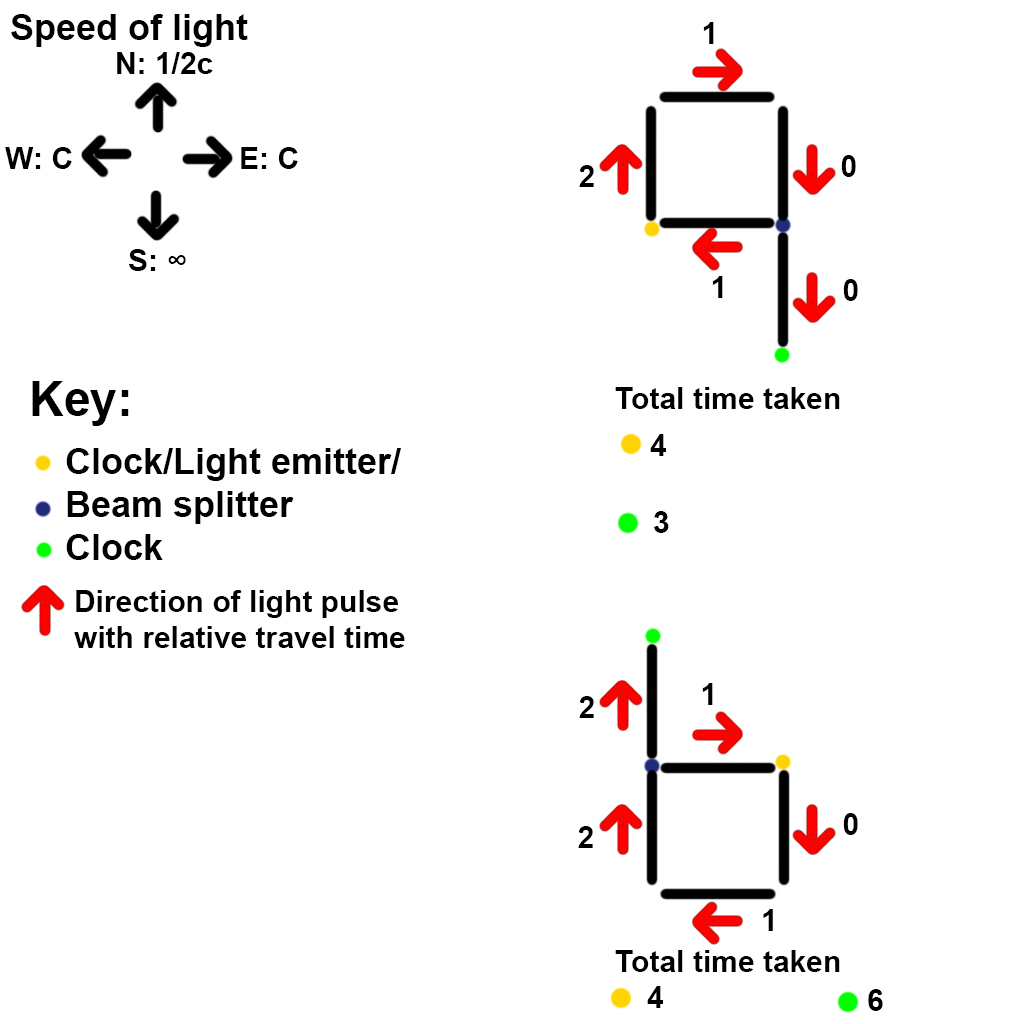 And that's it, spin the thing on a table and run the experiment. Do it in space to see if that makes a difference. Maybe there's something wrong with my setup, could easily be. Point it out if so by all means. And I don't personally doubt anything would come of it even if the setup is valid and given a go. Ok maybe there'd be some nagging uncertainty if it was fantastically sensitive due to some niggling quantum gravity effects, if it could be made sensitive enough for that somehow. But otherwise I'd be surprised at results other than "$c = c$ in all directions".

How do you synchronize these clocks?

Here's how you might synchronize two clocks: you make one of them send out a pulse when it's time 100, and when the other one receives the pulse, it sets its time to 100, and then you adjust the second one by adding the speed-of-light delay. (so if they're 2 light-seconds apart then you make the second clock say 102 when it gets the pulse)

Consider the top diagram for example. Here's how you sync the clocks: The yellow one sends out a pulse at time 100, and it travels down and right to the green one, with a total delay of 1, but you think the delay is 2. The green one receives the pulse and sets the time to 102 when the yellow one says 101.

11
Is there any way to measure the one-way speed of light?