In which way do the Earth's rotational axis tilted 23.5°. 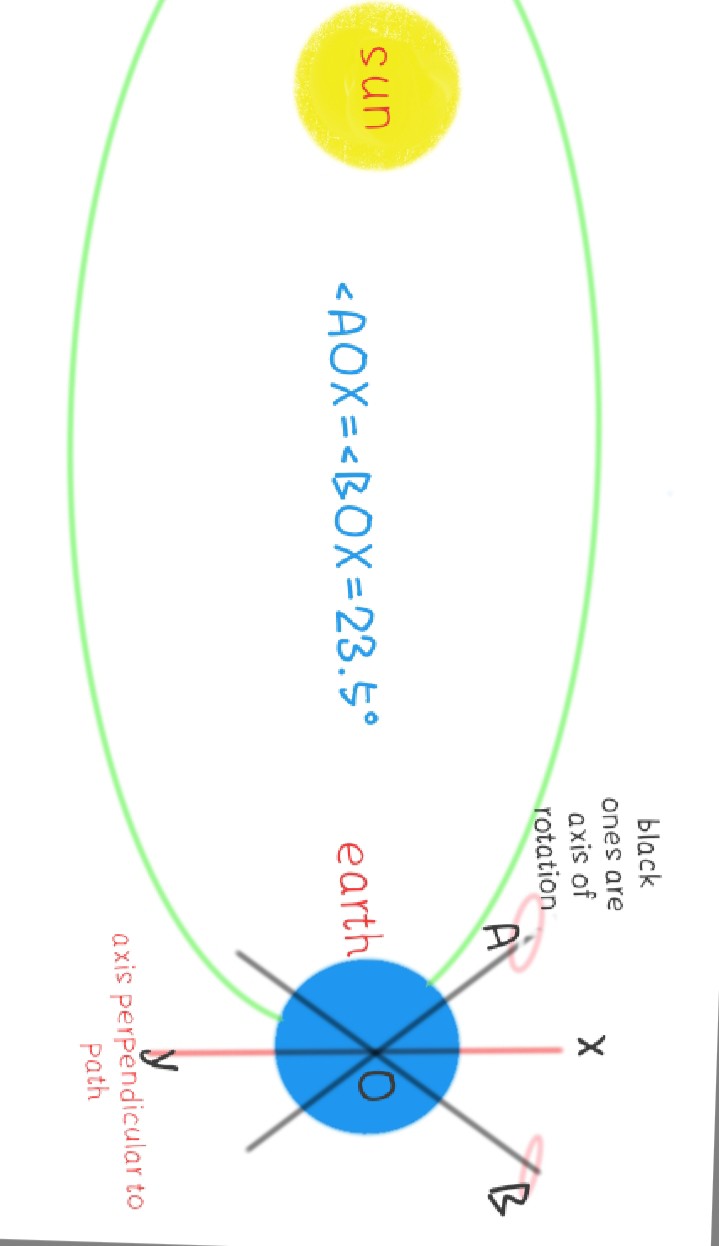 see in the image we have been told that the axis of rotation of Earth is tilted 23.5° from the perpendicular to path. But can anyone say in which direction the earth is tilted .AO or BO. Is the axis of rotation tilted towards sun or away from sun. And still it is confusing in solstices. Where the rotation axis of Earth at one solstice is towards the sun and at other solstice away from sun.

The tilt is always 23.5 degrees, and it always points in the same direction (roughly to the Polaris star), but that means that it does not always point towards the sun or away from it. That depends on the time of year.

Let's say that in your drawing Polaris is "above" the earth orbit, and "left" from the center. Then the earth axis is tilt "to the left", matching your A direction.

At the "right" end of the orbit (as seen in your drawing), the axis points towards the sun, and that corresponds to June, meaning lots of sun (= summer) for the northern hemisphere.

Half a year later, in December, the earth is at the "left" end of its orbit (invisible part of your drawing), its axis still pointing to the left, which now means "away from the sun", resulting in less sunlight (= winter) for the northern hemisphere.

So, to literally answer your question:

Both A and B are correct, with A matching in June, and B matching in December (and looking into the solar system from the opposite direction).

The angle of tilt is measured between the axis of rotation and a line which is perpendicular to the plane of the orbit. The direction of tilt relative to the “fixed” stars changes very slowly (over thousands of years); a precession caused by a variable torque primarily from the moon. (It pulls harder on the closer side of the equatorial bulge.

Not the answer you're looking for? Browse other questions tagged reference-frames astronomy earth solar-system geomagnetism or ask your own question.

3
Does the long axis of Earth's orbit precess? Does it nutate?
4
Direction of planetary tilt
1
What is the correct Orientation of Earth's Rotational-axis w.r.t Ecliptic at Equinox?
6
What is the scientific reason for the inclination of earth's rotation axis?
2
Can humans control rotation of the Earth?
4
How far has Earth moved from its birth orbit?
0
Explain the relative motion between two particles of a rotating rigid body
3
Do we see an ellipse when we view Earth's horizon?
2
Axis of rotation of the earth
0
Would Earth always face Sun the same way if Earth didn't rotate around it's axis?