Why do objects weigh less the further from Earth's center?

I just finished watching a video on gravity. It stated that an object weighs less the further it is from the center of the earth. Example being on a mountain top or at the equator being that the earth is not round but slightly oval shaped and so at the equator an object is also further from the center of the earth. So my question is…why would the same object weigh more on a much larger rocky planetary body such as the size of Jupiter when the object would be many times the distance from it’s center? By saying that the closer an object is to the center of Earth, the heavier it would be, then wouldn’t the surface gravity of the moon be 6 times heavier than on Earth instead of 6 times lighter being that the object is so much closer to the moon’s center? I know there’s a scientific answer but it doesn’t seem you would weigh less at the equator because you are further from earth's center.

Let's make a little base first then come to the main topic of our concern. What is the weight of a body?

There are actually two definitions of weight which use commonly and are both acceptable. You can find them in any text (ref: Introduction to Mechanics Klepner : Section - 3.3.3 Weight). For our purpose, we will use

The weight of a body is the gravitational force exerted on it by the Earth( or any other planet on which you are). At the surface of the Earth, the weight of a mass $m$ is $$\mathbf{W}=-G\frac{M_em}{R^2_e}\hat{r}=mg$$

The familiar quantity $g$ is what we call gravity whose value is around $9.8 m/s^2$.

Our definition of weight has one minor drawback.

Now let's be clear about the drawback. The first problem is the exact force that the earth exerts on the body depends on the distance between the center of the earth and the center of the body. But because the body is too close to earth we don't count that little distance. Second Earth is rotating and so we are in a rotating frame of earth, so there is the pseudo force that acts on our body (so-called centrifugal force). The direction of this force is outward to the rotation axis of the earth.

These two effects must be taken into account because the machine that weighs you take these into account so that effective gravity may be greater or maybe less in some cases.

The following is the definition taken by the machine. It is taken to be the magnitude of the force on a body that must be exerted by its surroundings to support the body under the influence of gravity.

So when you are in free fall and weight yourself it's turn out to be zero.

Now let's write some math and prove your statements. These can be done without any math too, just with little intuition but that we will do later.

When we take into account earth rotation, the effective gravity given by

The following formula approximates the Earth's gravity variation with altitude:

$g_h$ is the gravitational acceleration at height h above sea level.

$g_0$ is the standard gravitational acceleration.

These formulas clear the other question of OP.

You don't need to look at these formulas to prove that your weight reduce. For example, the effect of centrifugal depends on the radius of the circle that is made from the point where you are around the axis of rotation. This radius has the highest value at the equator so there will great outward force on the equator so you expect your weight to be reduced.

Note that these effects are not too great so the formula we learning starting to remain a good approximation. Proof for formulae can found here. 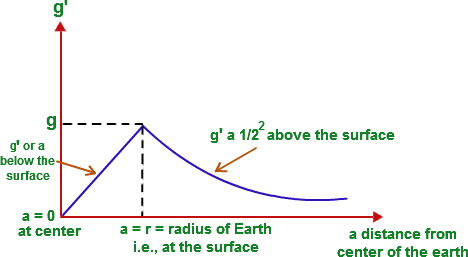 53
How does gravity work underground?

6
When a planet has a high gravity, is it impossible to build and launch a successful chemical rocket to space?
0
Why would we weigh less at earth's center?
3
How much pressure does the earth's central atom experience?
1
Could this planetary superalignment happen?
0
Equator water pipeline flow at sea level?
29
Is a westward flying plane heavier than an eastward one?