What is the drawing scheme of the parallel transport of a vector?

How do I draw parallel transport of this vector at various intermediate points on the path?

My understanding is that at different points on the path, the vector must be drawn such that at each point the vector makes the same angle with the tangent to the curve at that point. Is this the correct drawing scheme? Why is this called parallel transport then?

Not an answer but a hint in general :

Note : On a 2d surface $\sigma$ in $\mathbb{R}^3$ geodesic with the usual definition is any curve on the surface such that at every point its osculating plane is perpendicular to the tangent plane to $\sigma$ . The curve which gives the shortest path lying on the surface between two given points always has this property. On a 2d sphere geodesics are the great circles. 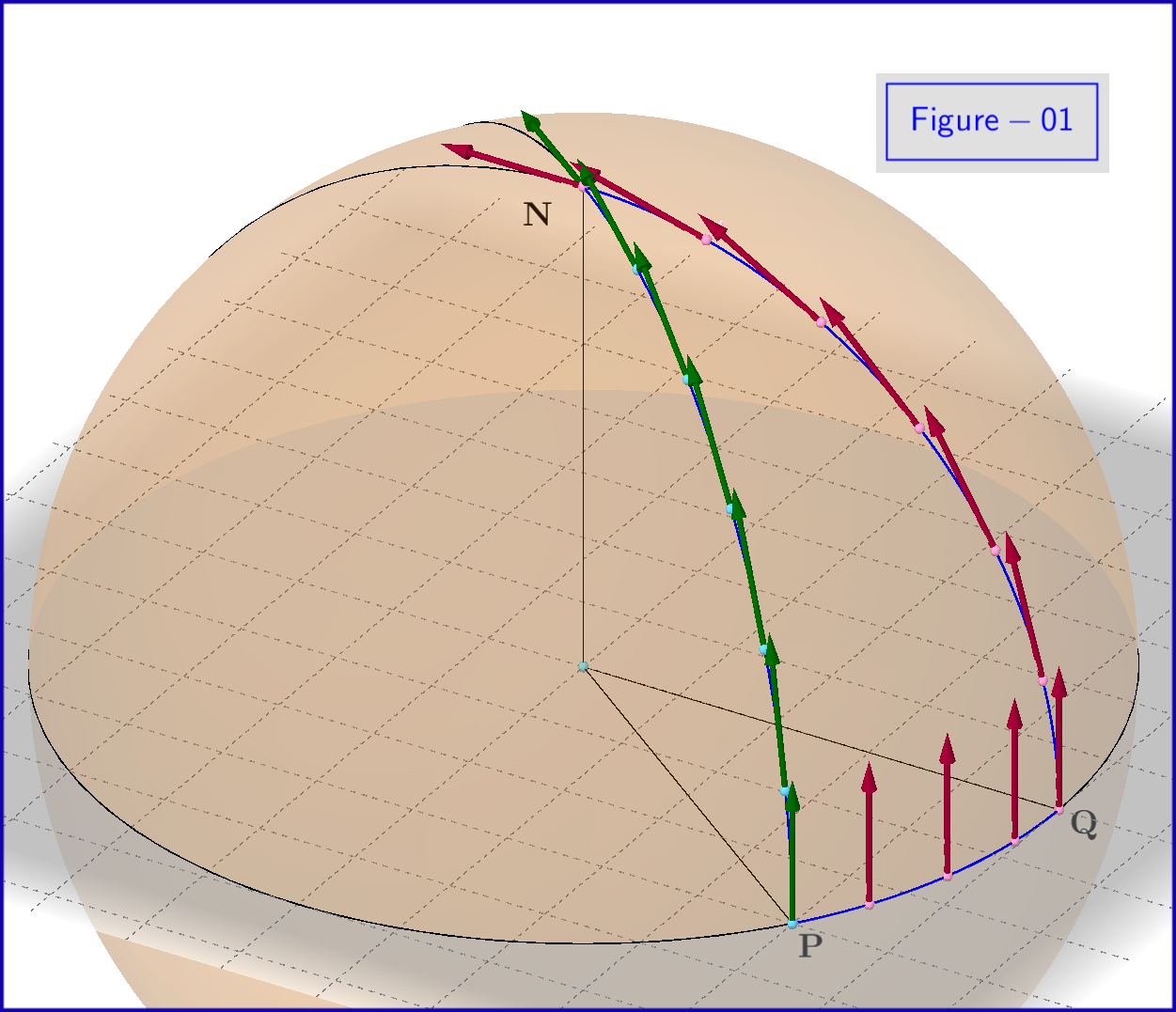 Intuition : If we were two dimensional beings, something like shadows, living on the sphere, don't you think that from these different results from the parallel transport along different paths we could conclude that we are living on a curved space and make predictions about the curvature of our world without embedding in a three dimensional space ?

As Levi-Civita pointed out in his "Absolute Differential Calculus"

From this point of view the geometrical concept of parallelism can be compared with the physical concept of work, which involves the integral of an expression of the form $X_{1}dx_{1} +X_{2}dx_{2}$ (where $x_{1},x_{2}$ are co-ordinates, of any kind, of the points of $\sigma$). This integral in general depends on the line $T$ of integration; only in the particular case when $X_{1}dx_{1} +X_{2}dx_{2}$ is a perfect differential is there no such dependence. 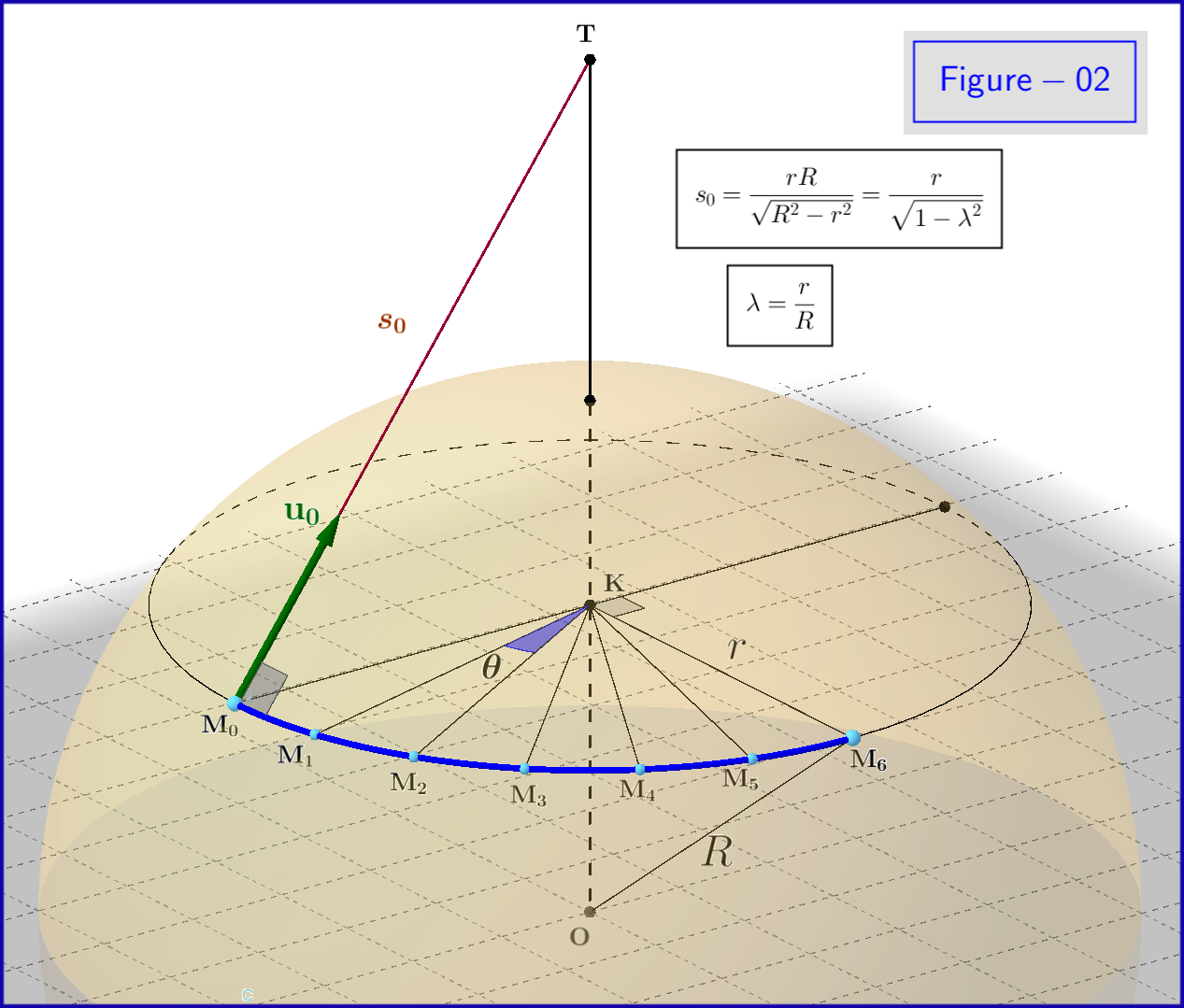 It's necessary now to note some useful definitions and general principles with respect to parallel transport.

A developable surface $\sigma$ is one which is flexible and inextensible and can be made to coincide with a region of a plane, without tearing or overlapping. Examples are the cylinder and the cone, and any surface formed of several portions of a plane. The intrinsic geometry of surfaces of this kind is identical with that of the plane.

Consider now that we want to make the parallel transport of a vector $\mathbf{u}$ along a curve $T$ lying entirely on a developable surface $\sigma$. To do this it's reasonable to develop (unfold) the surface on a plane, make parallel transport on this plane of the developed vector $\mathbf{u}$ along the developed curve $T$ and return back wrapping the plane on the initial surface $\sigma$. 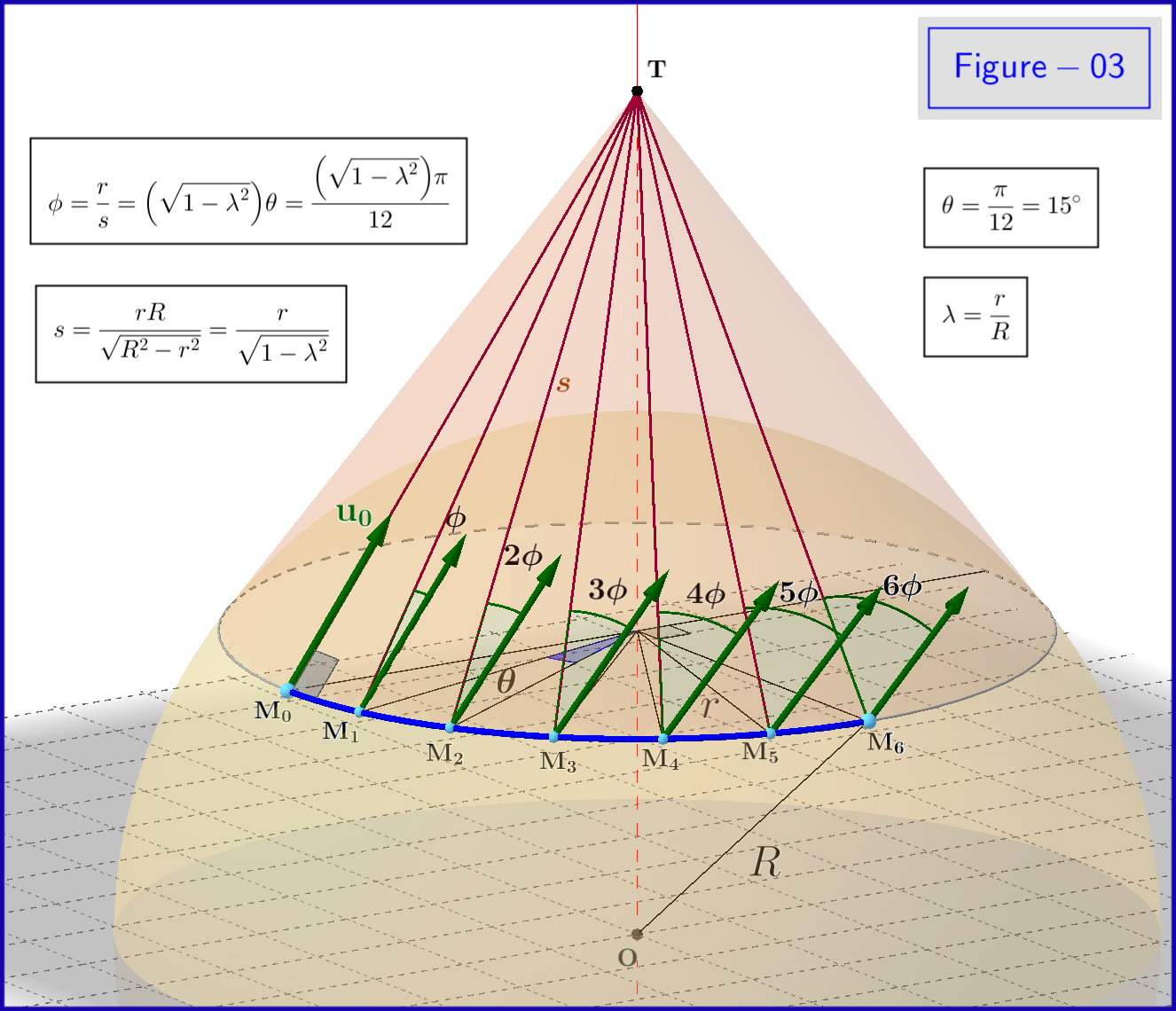 According to the previous paragraph we unfold the developable cone of Figure-03 on a plane as shown in Figure-04. 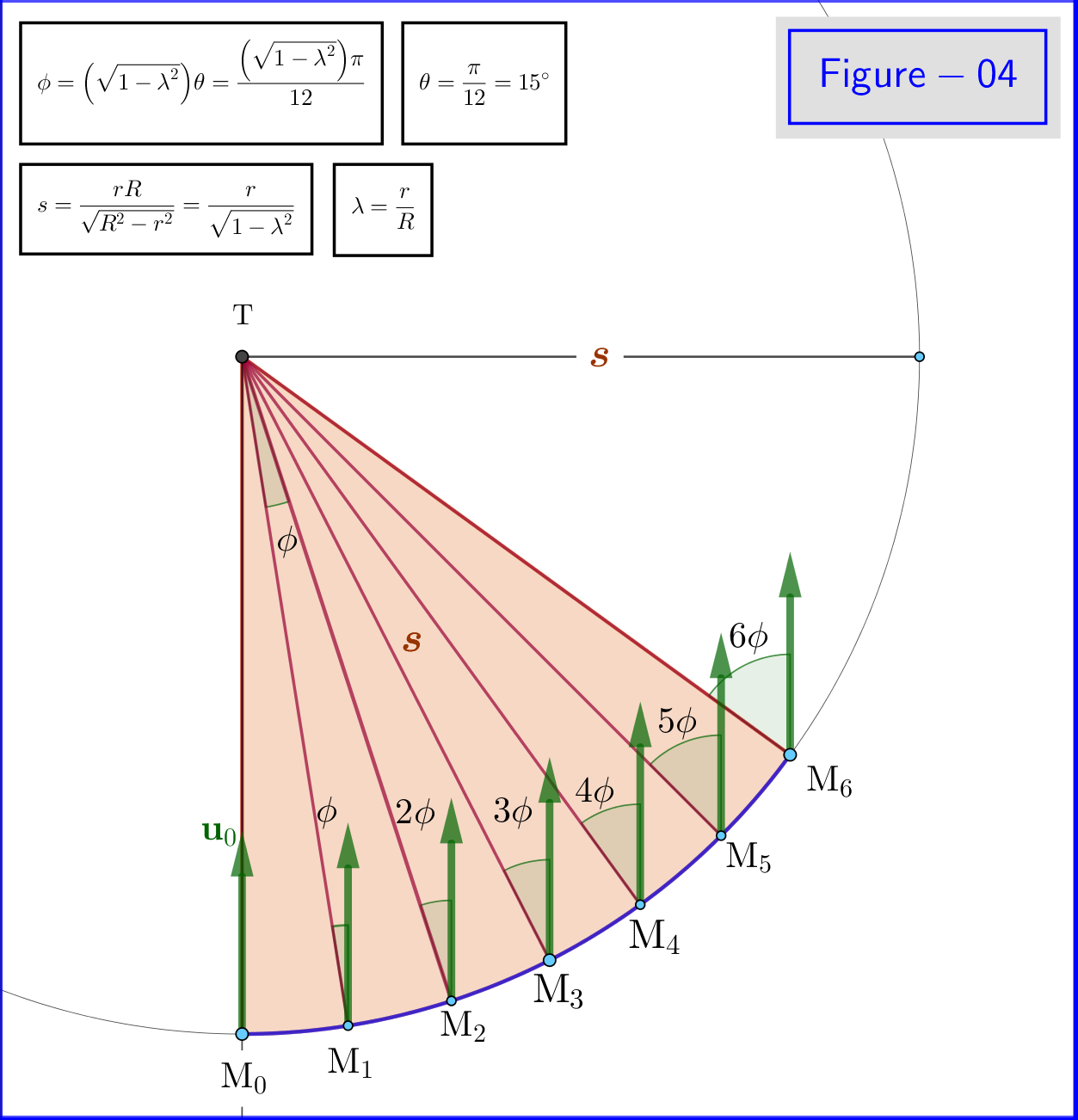 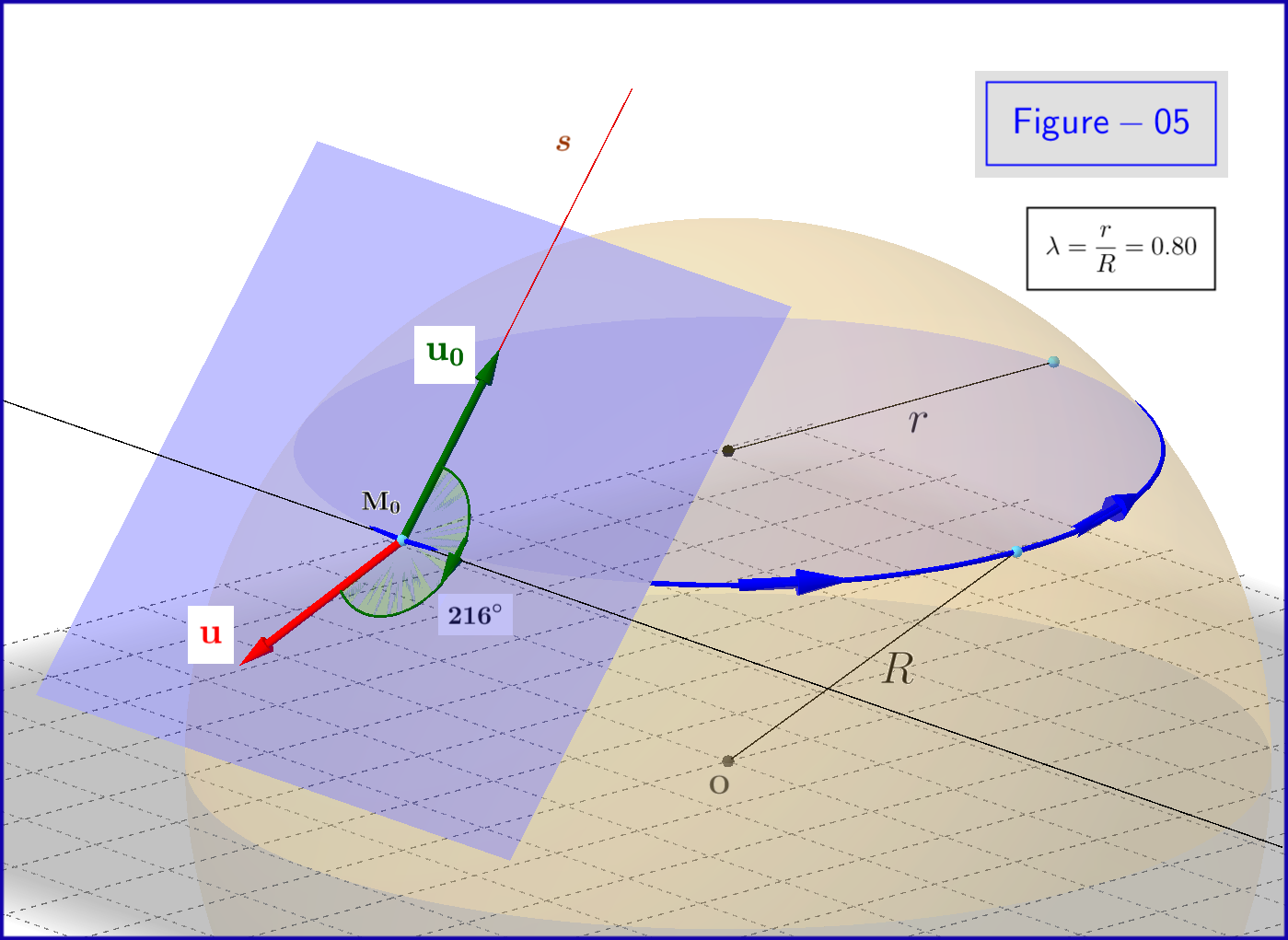 I believe the idea is to think of the movement of the vector from the perspective of being actually on the surface, rather than viewing it from "outside" the surface. In the case you are talking about, if you view things as someone walking on the surface of a sphere like the Earth, then you are attempting to maintain the vector parallel to itself at each point as you move around the surface.

For example, if you imagine yourself on the Earth at the equator facing East. You hold a vector pointing East. You then walk East a quarter way around the Earth. Then you turn left (by 90 degrees heading North), but hold the vector still pointing East. You continue walking North until you reach the North pole. Then you turn left again (by 90 degrees) but hold the vector in the same direction, parallel to itself. When you return to your starting point at the equator, the final orientation of the vector you have been parallel transporting will not be the same as the original vector that pointed East when you started. The reason being that you are walking on a sphere and not a flat surface, although from the perspective of the actual walking trip on the surface, it seems like you were holding the vector in the same orientation for the entire trip.

Prof. Sean Carroll nicely describes essentially this scenario, with diagrams, in his recent YouTube series which you might find helpful for further insights. The relevant section is here (starting around 28:00): https://youtu.be/kp1k90zNVLc?t=1683

Not the answer you're looking for? Browse other questions tagged differential-geometry curvature vector-fields or ask your own question.