How to resolve a horizontal force acting on an object in an incline plane into a parallel force?

A particle of weight $W$ Newtons is supported on a smooth inclined plane by two forces each equal in magnitude to half the weight, one acting horizontally and the other acting parallel to the plane.

We are asked to draw a diagram and here is the one provided by the answer:

First of all, why is the horizontal force ($\frac{w}{2}$) is acting to the right? Why can't it acts to the left instead?

Second, if the horizontal force is to the right, how can I resolve it into the parallel component, in order to get the form:

this is my diagram, why is it wrong? 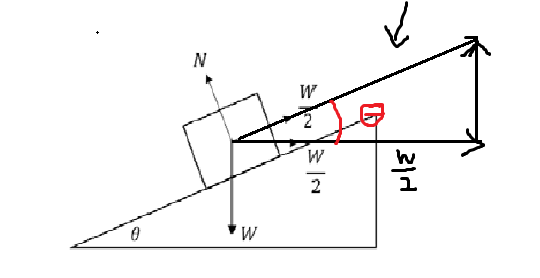 First of all, why is the horizontal force ($\frac{w}{2}$) is acting to the right? Why can't it acts to the left instead?

It is pretty obvious that in this situation the body can't be supported on the inclined (which is against the first line of your question) . So the force must be towards the right.

Second, if the horizontal force is to the right, how can I resolve it into the parallel component

From the picture, you can get that the angle between the force parallel to the Incline and the horizontal force is $\theta$. Now Here's the picture of resolution :

Vector resolution is a process in which we draw an imaginary right angled triangle with the vector as it's hypotenuse and then we find the value of that vector along the remaining two perpendicular sides of that triangle.

Since the angle between the actual force (green line) and the dotted blue line is $\theta$. So the component of that green line along the dotted line is $\frac{w}{2}\cos \theta$ using this

Your last picture is useful only when you are resolving the force which is acting along the incline since the two axes along which it is being resolved are perpendicular. But if you are trying to resolve the horizontal force on those two lines then you can get its component on the hypotenuse only and not on the vertical line and this is against the definition of resolution. You need two mutually perpendicular axis for resolving a vector but your picture doesn't meet this criteria for the horizontal force and so it wrong to resolve that horizontal force along the two remaining sides.

1
Question about a car on a banked turn with no friction
0
Why resolve some forces into components and not others?
1
How do you tell whether a force acting on an inclined plane is going up or down in its perpendicular component to the plane?
2
Why is the centripetal force vector on a banked turn horizontal rather than parallel to the incline?
1
How to find static friction coefficient and the applied force's angle of inclination with a horizontal plane?
0
Kinetic energy confusion?
4
How can sum of component forces of gravity on inclined plane be greater than actual force of gravity?