Does the Electric Field Instantaneously vanish during an Electron Capture?

When an Electron Capture occurs a Neutron and a Neutrino are formed. Prior to this process due to the presence of the proton and electron an electric field must've existed however as soon as this process happens which is almost instantaneous i believe the electric field must vanish right? So what happens does this change propagate at the speed of light i.e. say somewhere 1 light year away the change will be felt after 1 year? Also what happens to the energy (if any) which was stored in the electric field does it go to the Neutron and Neutrino? 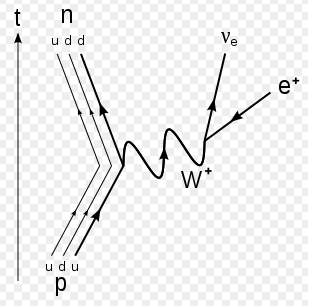 To start with, there is charge conservation at each vertex.Quarks are charged and take the balance: for a proton to turn into a neutron an up quark absorbs a charge of -1 and becomes a down quark. (The particles indicated in the arrows towards a vertex can be read as antiparticles going away from the pointed vertex).

So as far as charge conservation goes the absorption of a virtual $W^-$ is what changes the up quark to a down quark. The charge of the incoming electron is transferred by the $W^-$ .

i believe the electric field must vanish right

So what happens does this change propagate at the speed of light i.e. say somewhere 1 light year away the change will be felt after 1 year?

At the particle level, as there are no photons in the interaction there is no electromagnetic energy going away from the interaction. There are the neutrinos that carry energy away, and in principle if one had an experiment with accumulated data of electron capture and one had very good neutrino detectors, yes they would be seen in the cosmos. Because of the weak interaction being so weak, it is a science fiction scenario.

Also what happens to the energy (if any) which was stored in the electric field does it go to the Neutron and Neutrino?

At this level of analysis there are no electric fields . The energy of the interaction is shared between the elementary particles involved, according to the boundary conditions of the nucleus involved also.

Nothing happens instantaneously. Nuclear processes tend to happen on a faster time scale than chemical & other electronic processes, because of the smaller distances & larger energies involved in nuclear processes.

In normal matter, the number of electrons equals the number of protons, and since they have the same electric charge normal matter is electrically neutral: there's no appreciable electric field unless you're really close to an atom because the field contributions from the protons & electrons balance each other.

When electron capture occurs, the changes to the electromagnetic field propagate at the speed of light, as usual, but those changes are rather small. Bear in mind that any atom that undergoes EC has multiple protons & electrons, and losing 1 pair doesn't affect the total energy by very much, but it does change the shape of the electrical field, so there are changes in the nucleus as well as in the atom's electronic structure. And of course that electronic structure determines the chemical properties of the atom, as well as most of its physical properties apart from its mass (eg, colour, melting point).

An electron and proton are oppositely charged and together form a dipole, which from a distance looks neutral. As the particles get closer together, the dipole formed gets weaker, until it reaches zero when they merge. The process is not instantaneous.

The change in field propagates at the speed of light. Opposite charges attract, so as the particles approach one another the field does work on them both, accelerating them, extracting energy from the electric field and transfering it into kinetic energy of the converging particles.

In an elastic collision, the electron would whizz round the proton and fly off, like a comet round the sun. But if it comes close enough for the weak interaction to produce a W boson that can hop the gap, the charge goes with the W into the proton, and the remainder of the kinetic energy flies off with the chargeless electron that is now a neutrino. Since a neutron is slightly heavier than a proton, the W must carry a little of the electron's kinetic energy and leave it as the neutron's increased rest mass.

Not the answer you're looking for? Browse other questions tagged electrons nuclear-physics neutrinos neutrons protons or ask your own question.

17
What exactly does the weak force do?
9
What is the QFT picture of a static electric field?

6
Free neutrons in the sun's core?
2
How is an electron "recycled" in a neutron?
5
What causes Potassium to decay into Argon the way it does
0
Differences between neutrons from electron capture and positron emission
1
Confusion in Positron Decay
3
Are fundamental particles more than their properties?
1
Microscopic process of electron degeneracy pressure
2
Why does the formation of deuterium involve the release of an antielectron rather than electron capture
0
How can a nuclear chain reaction start?
2
Does the electron capture process ever occur in hydrogen?