Why does a capacitor act as a frequency filter?

What is it about a capacitor which allows it to filter frequencies?

I understand the construction of a high-pass RC filter, and the mathematics behind it, but I'm struggling to find an explanation of the physics behind the phenomenon.

In my mind I can picture the broad spectrum signal hitting the capacitor, but I feel like the "output" behaviour would be mush, not a controlled and predictable behaviour. I'm not a physicist, but I'd like to understand this problem better.

An capacitor has one intuitive property:

Its voltage can't change instantly since its voltage is dependent on the charge it has stored, and charge doesn't move at infinite speeds (there is always resistance somewhere), therefore you can't instantly charge up a capacitor without infinite current. More capacitance means less voltage for the same amount of charge, like how a wide bucket or a narrow bucket will have different water levels inside them for the same amount of water. It's also impossible to fill a bucket up instantly.

But that is not to say it can't partially oppose the source voltage. It obviously does, and the fact that opposition is monotonic with frequency lets it behave as a high-pass filter.

A capacitor alone cannot act as either. 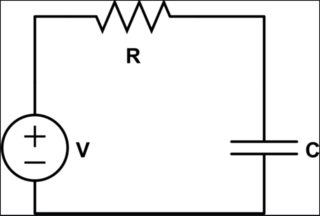 Above $\ \omega_c $ the impedance of the capacitor decreases at a rate which makes the magnitude of the frequency response of the transfer function of the circuit drop by 20 dB per dec.

Here is what it looks like simulated in LTSpice 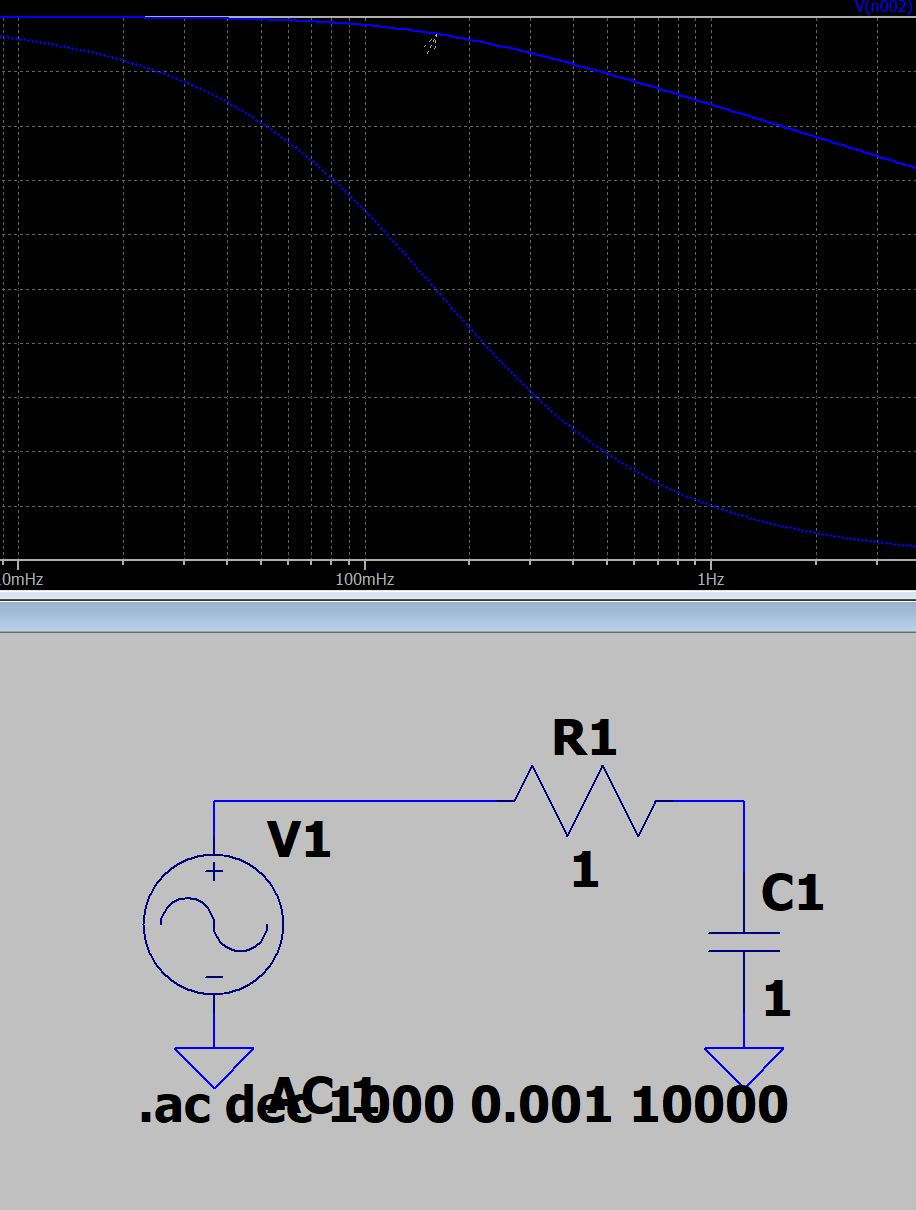 I added a small arrow at the -3dB point. Notice that above this point the frequency response decreases at a rate of 20dB per. dec.

I can also demonstrate that you don't need a capacitor to create a filter, an inductor - resistor combination will work just as well. As stated in the beginning of my answer; You need at least two immittances, at least one of which is reactive. 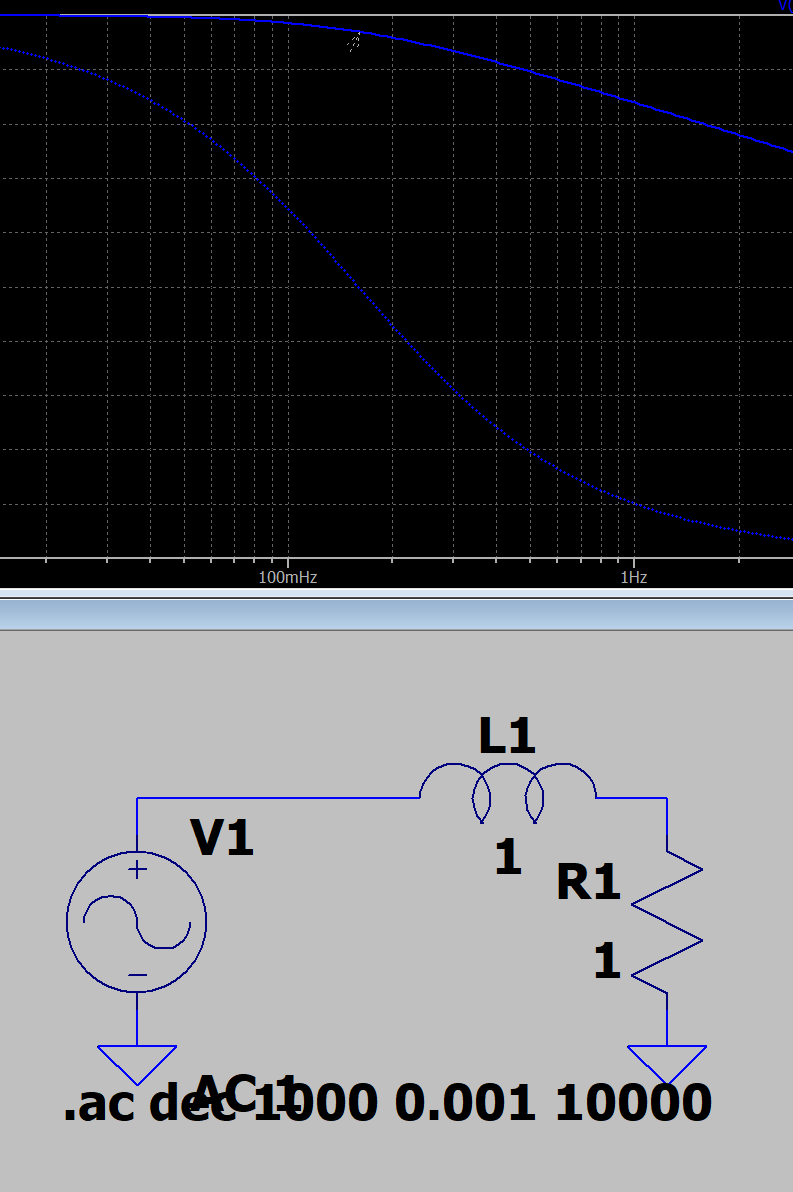 The result is exactly the same.

But a capacitor, or any single immittance element alone, cannot act as a filter.

You can also look at it from a different perspective;

What is it usually that we do when implementing a digital filter? we integrate!

Looking at the equations for the RC filter, what does it do? well the resistor limits the current, and the capacitor integrates the current:

It is hard to know what other people find intuitive, the two ways of thinking about it which I have explained above are the ones I find most intuitive.

Imagine electricity as water in a pipe. The current can flow in either direction (direct current, DC) or one way then the other way (alternating current, AC). Now put a rubber membrane in the pipe. This is the capacitor. Now it will slow and then stop DC, but AC can still keep wobbling back and forth. In this way, capacitors block DC but enable AC.

Considering AC, if the frequency of oscillation of the water is low, the membrane has to stretch a fair way before it gets to return to its middle position and out the other way. So if the membrane is quite tight/inflexible, then it will inhibit low frequency oscillation. At higher frequency, the membrane doesn't have to move far before it gets to go back the other way. In this way, the tightness and flexibility provides varying resistive effect to different frequencies.

Not a perfect answer, but maybe helps with imagining what's going on.

Sometimes for physical intuition, it's nice to think about the extreme cases. For instance, a zero frequency signal is just a DC voltage. If we send it through the RC high pass filter, the capacitor is just like a break in the circuit, and prevents any current from flowing.

Slightly more quantitatively, the capacitor equation $Q = CV$ implies that if we think about voltage as the driving force and current as the response, a capacitor acts as a differentiator: $I = dQ/dt = C dV/dt$ (while a resistor is a scalar and an inductor is an integrator). The physical content of the capacitor equation is just that the capacitor is in equilibrium, with the electrostatic charge repulsion exactly balancing the voltage.

I will attempt to address the "broad spectrum signal" part of your question.

As you probably know, any kind of signal can be looked as a composition of single frequencies (see Fourier transform). Broad spectrum signal can (or actually any signal does) incorporate infinite amount of different frequencies - but this doesn't change anything. In RC (or any other) filter all single frequencies behave as described and resulting signal is just sum of same frequencies with modified amplitudes and phases. What does change is your signal waveform - you may get rectangular impulses rounded and similar effects.

This is not mush - this is controlled output, although on screen of oscilloscope it may not look like original signal at all :)

Depend on signal processing needs this waveform change can be irrelevant - or can be showstopper. If you process only frequency part(s) of your signal, then all is good. If you require that rectangular pulses remain more or less rectangular and so on, then you likely need another kind of filter than RC one.

Picture a parallel plate capacitor made of perfect electrical conductor, separated by a perfect insulator. Clearly if you hook up a DC voltage source to either side of this no current will flow, because it's an open circuit. There will, however, be a voltage across the plates, which is exactly the voltage of the source.

Time for a suspension of disbelief: imagine you paused time and replaced that voltage source with the same voltage, but reversed the polarity. If you then un-paused time you would have the plates each being the negative of the voltage at the terminals of your source and a short circuit connecting these plates to that source.

Slowing down this polarity reversal and making it periodic would just be typical sinusoidal AC current (and if you can imagine this working with a sinusoid I can use Fourier series to stretch your understanding to arbitrary(ish) signals).

A capacitor along with a resistor can act like a filter because its impedance is frequency dependent and by division of voltage between resistor and capacitor it works.

A capacitor is an open circuit. Direct current can't flow through it because the plates of the capacitor don't contact.

However, when the current is alternating (or a signal), the electric field induced by one plate induces a current in the other plate.

That current is proportional to the capacitance and the time rate of change of the voltage.

Capacitors are sometimes used with DC power sources to remove high frequency noise - they don't conduct the low frequency DC because they are open.

Let us address the crux of the question - the physics.

The charge on each plate is, conceptually, equal and opposite for a given measured potential. In fact, on one plate there is an excess of electrons (over and above the charge balance in the protons and electrons comprising the atoms of the metal), and on the other plate there is a deficit of electrons (conceptually 'holes' is you like). The opposite charges are attracted to one another, but can not neutralize owing to the surface energy barrier at the junction between the metal plates and the dielectric. The field lines express the force each charge experiences. The distance between the plates times the force is the work (energy) required to separate the charge, scaled by the permittivity of the dielectric.

The density of electrons on the negative plate is larger proximal to the dielectric, and is likewise smaller on the positive plate.

In practice, there is leakage with some characteristic high impedance, typically on the order of a mega-ohm or more. Therefore low frequencies will be attenuated, since the slowly changing waveform will permit time for the plate attached to the amplifier to charge and discharge. This is a high pass filter, and it is commonly found coupling different stages of a multistage amplifier.

The resistance, or impedance, is a measure of the average collision frequency of a charge subject to an electric field traversing the material. In a low impedance material the drift velocity is higher owing to infrequent collisions, and in a high impedance material the drift velocity is lower so charging takes longer, i.e. is delayed. When a signal is changing rapidly (high frequency) the charge carriers are mostly just wobbling back and forth due to collisions.

In the first case, this prevents charging from attenuating a signal, and in the second case, this causes a signal passed by the line to be attenuated by preventing the distributed stored charge from changing appreciably.

Ultimately, these delays, inductive or capacitive, are a consequence of the necessity to change the stored energy which is done by changing the magnetic or electric field. The limiting factor is the speed of light which will be lower than the free space value in a high permeability or high permittivity material.

1
Electronic filter
13
Why do you only hear high frequencies when a microphone is near its speaker?
6
Frequency shift without affecting signal length
3
How to model "Doppler Distortion" of speakers?
10
Why does a wall act as a low-pass filter?
1
About the combination of two signals with capacitors
4
Pound-Drever-Hall frequency stabilisation technique
2
What exactly happens in a low and a high pass filter?
0
Can unjammable radio communication be achieved by transmitting an error-correcting code of high-energy pulses in a secret, unpredictable pattern?
0
Superposition of EM waves and "magic" behind tuned receiver circuit