What is the $\mathbf{H}$-field inside and outside the magnet?

A permanent cylindrical magnet with diameter $D$ and length $L$ possesses an uniform magnetization $\mathbf{M}$ going in the $z$-direction in a cylindrical coordinate system. The magnet is placed with its centre in the origin, with its length going along the $z$-axis.

But I'm not sure how to answer what direction $\mathbf{H}$ has inside and outside the magnet.

I found this example in my book, that revolves around the exact same scenario, a cylindrical magnet with uniform magnetization $\mathbf{a_z}M_0$. In the example, the author writes about the relationship about $\mathbf{H}$ and $\mathbf{B}$. He also talks about their direction, which I have marked with yellow. 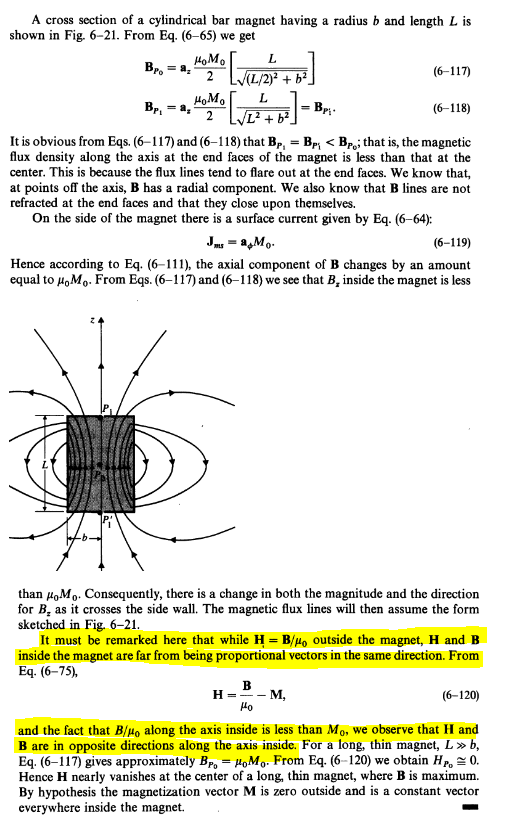 So if the scenario is the same, doesn't the example answer also answer my problem completely?

I will give a more qualitative answer than just formulas. Considering the given proposal one has to be very careful since $\mathbf{H}$ not only has to fulfill Maxwell-equations and material equations, but also the boundary conditions which are not the same for $\mathbf{B}$ and $\mathbf{H}$.

The Maxwell equations in case of a permanent magnet without any currents are those of magnetostatics:

This system of equations resembles to the equations of electrostatics:

So the solution will resemble an already well-known case of electrostatics.

In the following we also consider that the permanent magnet is directed along the z-axis, the only non-zero component of the magnetisation is $M_z$.

The only locations where the divergence of the magnetisation is non-zero are the ends of the permanent magnet. At the borders along the magnet, the z-component of the magnetisation $M_z$ also suffers an abrupt change, but in radial direction, so it does not matter since changes of $M_z$ in radial direction do not contribute to the divergence (only $\frac{\partial M_z}{\partial z}$ contributes).

So the permanent magnet resembles to two plates of opposite electrical charges at each end of the magnet, i.e. the $\mathbf{H}$-field looks like that of a cylindrical electrical condensator.

The equivalent charge of such a system is: $\rho = -\frac{\partial M_z}{\partial z}$ and assuming that the abrupt change at each end of the magnet is the same (respectively symmetrical) both charge densities $\rho_1 = - \rho_2$ as it is for a condensator. If the diameter $D \rightarrow 0$, the field line picture would resemble to that of two opposed point charges $+$ and $-$. So in order to know the $\mathbf{H}$ field in space as a function of coordinates just refer to the $\mathbf{E}$ field in space for a condensator.

17
What is the electric field generated by a spinning magnet?
5
Direction of $\textbf{H}$ and $\textbf{B}$ inside and outside a bar magnet
5
What is the correct expression for the magnetic energy density inside matter?
0
Why is the application of Ampere's law on H field incorrect in this situation?
0
B field and H field inside a bar magnet
2
Sketch a B-H hysteresis curve of permanent magnet
1
Why does the $\mathbf{B}$-field of a cylindrical magnet have no $\phi$-component
0
Behavior of $r$-component of a $\mathbf{B}$-field inside cylindrical magnet
0
Finding out the magnetic field at anypoint outside a permanent magnet (Cylinder,Cube)
2
When can we use Ampère's Law methods to find $\mathbf{H}$ field?