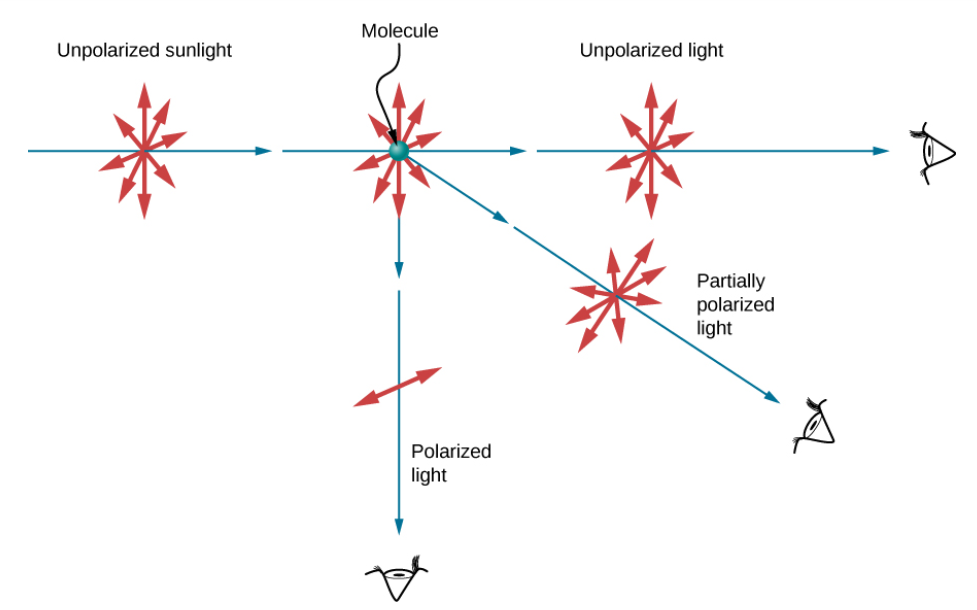 Above this sentence is an image of the diagram and paragraph I have been reading about polarization via scattering.

Question: Light EM waves are transverse waves aka move perpendicular to the direction they are traveling. There can be no polarization in the scattered light parallel to the original ray because that would require the original ray to be a longitudinal wave. Can someone clarify why this is the case?

I was trying to relate the scattering of unpolarized light to how unscattered light behaves through two polarizers. From observation when the second polarizer is orthogonal to the first, then no polarized light can get through. Should these two phenomenons be observed as separate cases?

For unpolarized incident light, there is only one initial vector: $\bf k$, the wave vector of the light. The final state vector is $\bf k'$

The scattering plane is defined by $\bf \hat k \times \hat k'$, which defines an alignment for linear polarization:

Note that linear polarization is a tensor alignment, so it points in either direction, like an un-oriented plane. Of course, if ${\bf \hat k'} = {\bf \hat k}$, then the cross product is zero, and there is no scattering plane.

You may ask about circular polarization in the forward direction, as it's defined relative to $\bf k'$. That would look like

where ${\bf S}$ is the spin on the photon and $\alpha$ is some factor. Under a parity transformation, that would go to:

so that a non-zero $\alpha$ violates parity symmetry.

Not the answer you're looking for? Browse other questions tagged optics scattering polarization or ask your own question.