Why don't we use the concept of axis of mass in place of center of mass?

Being a high school student, I read the concept of center of mass and it was written in my book that

When a spinning ball is projected with some velocity , then all the points on the ball have complicated paths except the center of that ball which follows the well known parabolic trajectory. And hence we define that point as center of mass.

However, I think that all the points on the any axis about which the ball is spinning follow the parabolic trajectory and are not influenced by spin . 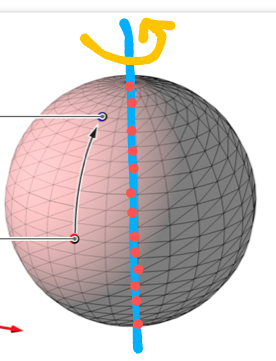 Edit : Most of the answers argued that the rotation axis may change because of torque but the main point to note here is that we can't differentiate between two axis in case of a sphere since it is symmetric from all sides and also that a sphere can't rotate about more than one axis at a time . So saying that it will rotate about different axis is I think meaningless.

So is it okay to define axis of mass in place of center of mass for sphere or other symmetric bodies or am I wrong somewhere ? If not, give a proper reason.

Your intuition is correct. All the points along the axis of rotation share the same motion. In fact, defining the center of mass by means of the rotation axis isn't sufficient.

This is a consequence of Newton's second law and the concept of momentum. The definition of momentum for a collection of particles leads to the definition of center of mass as being the special point whose motion and combined mass can be used to describe all the individual contributions of momentum from each particle.

There is only one point on a rigid body that satisfies the above. And the condition for this point is the definition for center of mass

PS2. See also this similar answer to a related question.

PS3. Here is an overview of the development of equations of motion for a rigid body. This might be advanced reading at this point, but it contains all the concepts needed to understand the subject.

Even for rigid bodies, the "axis of mass" wouldn't be a fixed line. The axis of rotation could keep changing depending on how the external torques add up vectorially. So the "axis of rotation" wouldn't be a property of the rigid body, but rather something which arises in a particular situation. The axis of mass could literally be any line passing through the center of mass.

EDIT- Responding to your edit, I think the whole point of your post was that, since any point on the axis of rotation can be seen as following a simple path throughout the motion of the ball, so all the axis points are as special as the CoM.

However, this is not true. The other points on the axis are NOT following a simple path in general. In the most general case of a direction changing torque (and hence a continuously changing axis of rotation), any other point (other than the CoM) on any of the instantaneous axes of rotation, is not following a simple path throughout the motion of the sphere. More importantly, the equation $a_{point}=\frac{1}{M}\vec{F_{ext}}$ is only valid when the point is the CoM. This equation is what's responsible for the CoM to follow a simple path. The motion of any other point is affected by the internal as well as the external forces in general.

I think you might see some sentences in your physics book like "The axis of rotation is always some line passing through the center of mass (unless there's a rotation about a forced axis)". That is all there is to the idea of "axis of mass".

You are right in the case of a sphere. A tennis ball with top spin will not change to side spin during its trajectory for example.

But for less symmetric bodies things are different. If the player throws its racket instead of the ball, the rotation axis will (in general) change indeed. Only the CM follows the parabolic path.

Newton's laws as they are stated are only applicable for point mass bodies. To apply them for rigid bodies, we need a point on the body that we can consider all of its mass to be distributed in.

As per axis crossing center of mass, it's useful for a moment of inertia calculations (see parallel axis theorem) but it's not useful for talking about motion. It's not something which we can define consistently. One of the reasons is that out of all the axis passing through, you'd need to specify a new axis such that your equations hold.

For example, imagine the ball having a torque applied in a direction such that it is rotated around the $y$ axis, suddenly the axis you've shown in the question(assuming it is the z) won't work so well.

See this answer for more details

And, it may be good to know that this extension was actually done by Euler (read here)

Note: point of this answer was to highlight the importance of the center of mass.

You got an axis full of points moving nicely because you considered rotation. It always happen along an axis and particles along that line does not move.

But consider a more complex system. Say a drop of water or hiighly elastic rubber ball which can deform, and compress when thrown, then there would only be one point which moves properly with a constant velocity.

Your 'axis of mass' depends on how the ball is spun, which depends on the whim of the person throwing it. So it is not a property of the ball on its own. But the centre of mass follows a parabola however the spin is aligned.

If the ball has a single axis of rotation, then all points on that axis will not rotate (that's pretty much the definition of "axis of rotation"). However, it's possible for a ball to have more than one axis of rotation simultaneously, so while their claim is misleading in that it implies that all non-center points always have complicated paths, it is true in the sense that only the center of mass is guaranteed to have a simple path.

As for your question of whether we can define an "axis of mass", that is clearly impossible in the case of a sphere; since the spherical is ... well, spherically symmetric, there's no way to distinguish a particular axis. There is one axis distinguished by the rotation, but that axis is particular to that motion, and not an inherent property of the sphere. Even if there is a particular axis that it is rotating around, there are an infinite number of axes that it could be rotating around.

For objects in general, it is possible to distinguish three principal axes.

Take a globe. Spin it around its normal axis, the polar axis the way the Earth spins. Then pick the globe up and while it is still spinning the first way, flip it north to south the way you would a coin. There you have a sphere spinning over two axes at the same time and your axis of mass makes no sense. The center of mass and only the center of mass is traveling in the parabolic trajectory under your conditions.

If the sphere is fully symmetric, then you can't define "the" axis of mass, because ANY axis of the sphere would be equally good, so it's not a well-defined quantity. Only the center is well defined.

In general, in 3D Newtonian physics, an object actually has three "axis of mass," expressed by the Inertia Tensor. This is used to good effect in-game physics simulations, where a long, thin object tumbles differently from a short, fat object. This is also why objects typically end up spinning around one "main" axis of rotation (the "biggest" axis in the tensor) but can use off-center angular momentum to "flip" around one or both other axes. Google the "spinning corkscrew in zero gravity" YouTube videos for some illustrations.

In some circumstances, like you describe, you can construct an axis of mass. However, this is typically not done. One of the major reasons to operate on a center of mass is that it completely decouples the translational movement from the rotational movement. They can be handled independently, with independent sets of equations to solve. To have an axis of mass brings the rotational component back into the translational part of the problem, wrecking that independence.

In some easy cases you can do this. It just means you have to solve a more difficult problem instead of an easier problem. However, in more complex situations this gets very difficult very quickly. For example, if you have a gyroscope, it precesses and nutates, which means the axis of rotation is constantly changing. This means your axis of mass would have to change. However, if you did the calculations using a center of mass instead, this rotational effect would not matter when you're computing the translational results.

So in the end, in some situations you can think in these terms, but it often complicates the problem unnecessarily.

That being said, there is a related concept known as Screw Theory where we model the translation and rotation as one "screw like" motion and has a meaningful screw axis which is used for both translation and rotation. We typically do not teach it in physics class because it's mathematically quite a complicated way of thinking about it. However, it is popular in robotics because it turns all translations and rotations of an arm into screw multiplications. For the sorts of things they do in robotics, like inverse kinematics, the simplicity of treating everything as a multiplication outweighs the complexity of mixing together translation and rotation. However, the screw axis is not the same axis as the "axis of mass" you describe. It's a different axis.

Not the answer you're looking for? Browse other questions tagged newtonian-mechanics rotational-dynamics terminology definition rigid-body-dynamics or ask your own question.

9
How many different axes of rotation can coexist?
3
Understanding Newton's second law of motion for 'massive' bodies
2
Rigid body dynamics derivation from Newton's laws for higher dimensions
1
Intuition behind the center of mass

4
About effects of torque off center of mass
0
Do objects rotate around their center of mass or not?
0
Effect of spin on the deflection of a rigid body
1
Is there a fixed orientation of center of mass axis about which all unconstrained rigid bodies rotate?
1
Why is the center of mass the pivot of rotation?
0
Using the Center of mass; string-balls system
1
How can you take torque about an accelerating point that isn't the center of mass?
0
Moment of inertia of the system of a sphere attached to a rod rotating in the axis shown