How does an observer outside an accelerating body rationalize the effects of pseudo force?

Consider this following thought experiment: There are two tracks, one with a line of cameras and another on which a car with transparent sides moves (*). Now, imagine attaching a pendulum to the roof of the car, as the car accelerates to gain speed, we see that the pendulum makes an angle with the vertical in a direction opposite to which the car is accelerating in from the photographs which the line of cameras will take.

Using the photographs, we can construct a position time curve and we would find that the acceleration of bob in the car has some sudden shifts. A person inside the car can understand this phenomenon as the effect of pseudo force(**), that is the pendulum bob experiences a force opposite to the direction in which the car is accelerating. However, how does a person outside the car rationalize this phenomenon occurring?

*: We can think of it as ripping off the car door so that we can see the pendulum's motion inside the car at all times.

**: If we attach a frame of reference to the car, then that frame is accelerating, and hence we have to consider the -Ma pseudo force on it. Where M is the mass of the pendulum and a is the acceleration of the car.

However, how does a person outside the car rationalize this phenomenon occurring?

When the car initially accelerates, the person outside the non inertial frame of the car sees the pendulum bob as "staying in place" while the car accelerates forward, i.e., the bob does not accelerate with the car. The person explains it as due to the inertia of the bob as a consequence of Newton's first law, namely, that a body at rest tends to stay at rest unless acted upon by a net external force.

The person inside the car can only explain the initial backward acceleration, based on Newton's second law, as being due to some force acting on the bob, the same force that pushes the person back against the seat when accelerating. Since there is no contact force acting on the bob or pushing the person back against the seat, it is considered a pseudo or fictitious force.

Once the car accelerates and maintains its acceleration, the bob will stay in place in some backward position and actually experience a real acceleration along with the car due to the tension in the bob string.

"When the car initially accelerates, the person outside the non inertial frame of the car sees the pendulum bob as "staying in place" while the car accelerates forward, i.e., the bob does not accelerate with the car. " Doesn't the air molecules inside the car bouncing around have any effect on the motion of the Bob? I mean would the result be same even if we did this in a space ship in vacuum?

The pendulum bob only initially stays in place horizontally in the frame of the road due to no external horizontal force. But as the horizontal component of the string tension increases the bob moves with the car.

The diagrams below may help to visualize what's happening. The first digram shows the pendulum attached to the roof of the car from the perspective of an observer in the inertial frame (the road). We will assume no air drag force will arise. So initially there are no external horizontal forces acting on the bob.

Figures A-C of the second diagram show the progression of motion of the car/pendulum as seen by an observer on the road (the non accelerating frame). The acceleration begins at Fig A.

In Fig C the bob is increasingly being pulled by the string in the x-direction due to the force in the string. Eventually the pendulum angle will reach a maximum value, depending on the car's acceleration, and the horizontal velocity of the bob will be the same as the car. 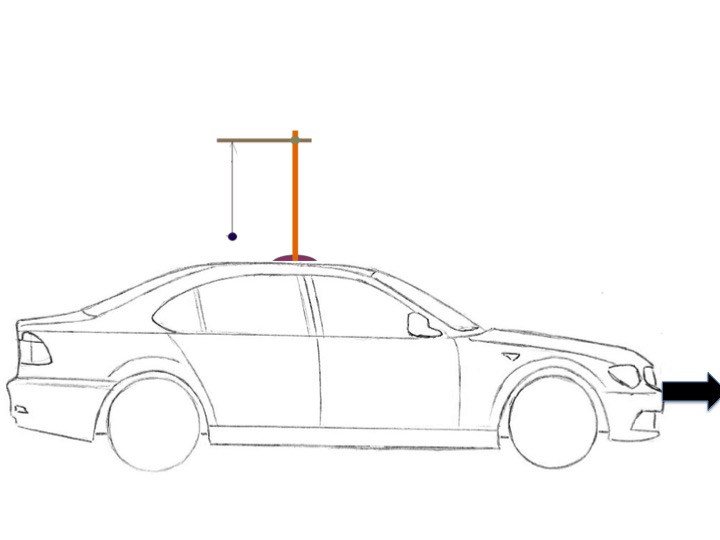 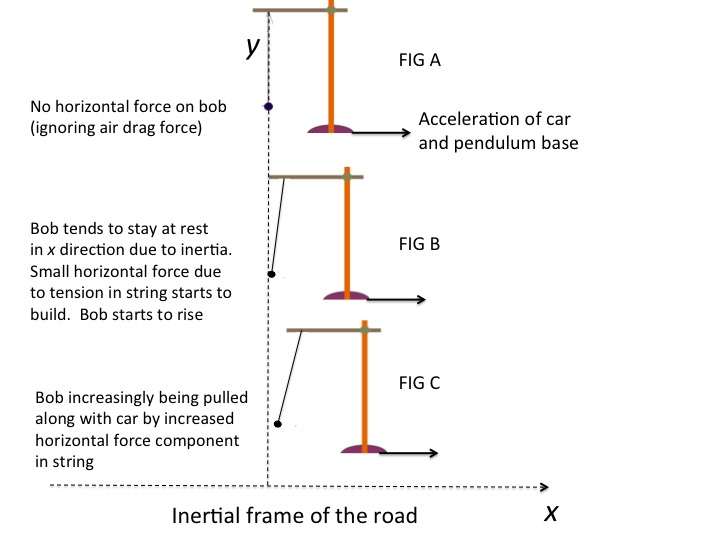 I think the best answer here is that, from the perspective of the inertial observer, there just isn't anything to explain, as long as you've accepted Newton's laws. The pendulum bob is doing exactly what Newton's first law predicts it will do: maintaining its momentum in the absence of any forces on it.

The need for explanation arises only for the non-inertial observer, who sees a violation of Newton's 2nd law insofar as he sees the bob accelerate but with no force to explain it. So he has two options: either invent a force to explain the acceleration or postulate that his reference frame itself is accelerating. This is analogous to how Einstein revolutionized our understanding of gravity.

The person outside the car can understand the pendulum's behavior in the same way as the person inside. Any reference frame can be used to solve any problem, so you should pick the one that makes the problem easiest. You aren't obliged to pick a frame in which you're at rest. When people do, it's only because that makes the problem easier—and it certainly won't here, given that the people have nothing to do with the problem setup.

I think that modeling the pendulum's behavior in this problem, if you want to be fairly accurate about it and include oscillation and perhaps damping, will be far easier in the accelerating frame, at least if the acceleration is uniform. You can take the sum of the gravitational and fictitious acceleration as your effective gravitational acceleration, and plug it into standard pendulum formulas. The description with respect to the inertial frame, however you derive it, will be a coordinate transformation of the simpler description with respect to the accelerating frame.

If you want a qualitative description with respect to the inertial frame, neglecting details of the motion, then you can read Bob D's answer. I realize this is a non-answer, but I feel like it's the correct response to word problems like this that appear, as they're phrased, to be based on a misconception. The last thing the world needs right now is the notion that different people live in private universes and are unable to comprehend anything from anyone else's point of view. I can tell you that that's 100% untrue in physics. You can understand the banding of Jupiter in terms of the Coriolis force even if you aren't on Jupiter, and you probably should.

Not the answer you're looking for? Browse other questions tagged newtonian-mechanics forces reference-frames acceleration inertial-frames or ask your own question.

1
Is pseudo force just an ad hoc number to explain motion in non-inertial frames?
0
How to make conclusions about a body moving in an accelerated frame as an observer in an inertial frame of reference?
1
Coriolis Force: Direction Perpendicular to Rotation Axis Visualization