Why does fluid pressure decrease as fluid velocity increases according to Bernoulli's principle?

I’m studying aerodynamics. I understand Bernoulli’s principle very well, I just can't wrap my head around why pressure decreases as velocity increases. Like the garden hose example: if you cover the hose with your finger, water flows out of the hose faster (and somehow pressure decreases) but when the finger blocks the hole, wouldn't that add extra pressure on the fluid?

This is a classic misunderstanding of Bernoulli's equation. What Bernoulli's equation actually says is that the velocity will increase in the direction of decreasing pressure: $P_2-P_1=-\frac12\rho(v_2^2-v_1^2)$. This makes sense: if the pressure is higher on the left than on the right, then the fluid will speed up to the right. This is just like if I pushed on a block with $5\,\rm N$ of force and you pushing on the block in the opposite direction with $10\,\rm N$ of force: the block would accelerate away from you and towards me, thus speeding up towards where the smaller force is being applied.

Like the garden hose ex: if you cover the hose with your finger, water flows out of the hose faster. (and somehow pressure decreases....) but when the finger blocks the hole, wouldn't that add extra pressure on the fluid?

Yes, it would add extra pressure. Let's assume the hose is completely horizontal so that Bernoulli's equation for comparing the fluid inside the hose ($1$) and just outside the restriction ($2$) is (expressing pressures as gauge pressures)

i just can't wrap my head around why pressure decreases as velocity increases..

When velocity increases then you obviously have acceleration. Now what is causing this acceleration? As always (according to Newton's second law, $\vec{F}=m\vec{a}$) acceleration is caused by a force. In this case the force acting on a piece of fluid comes from the pressure difference, making a net force pointing from higher pressure to lower pressure.

(image from ResearchGate - Diagram of the Bernoulli principle)

These thoughts can be made quantitative to actually prove Bernoulli's law.
Consider a small cylindrical slab of fluid (with mass $dm$, area $A$, thickness $dx$, and moving with velocity $v$). 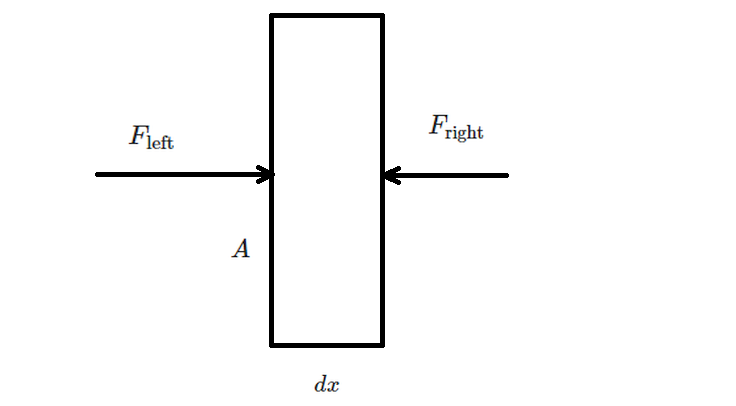 I once taught myself compute programming and made a particle-geometry collision simulator to test the following, and it seemed to work, so I'm drawing on the intuition that I learned from that project.

Remember PV = nRT, even if the system is not ideal.

Fluid velocity is a macro-level measurement of may particles generally traveling in the same direction.

More to your question:

Not all pressure measurements are created equal. There is no universal measure of pressure for a fluid in motion. The measured pressure depends on whether you measure from the side of the flow or inline with the flow, which hopefully makes sense now since pressure is one of the measures of kinetic energy transfer through collisions. Measure from a direction that is going to have few particulate collisions with the sensor and you're going measure low pressure.

Assuming that the particle count and the kinetic energy of the particles are kept constant, then particles generally traveling in one direction are not colliding with their environment as much as if they were confined. Again, a neutrally charged particle will travel in a straight line until it collides with a surface or another particle. As long as it hasn't collided with anything, then it will continue in the same direction. Reasoning in reverse, if we see particles moving generally in one direction, then we can safely conclude that they are not colliding with anything that will substantially change their direction, and any collisions that do happen are going to be at a shallow angle, the kinetic energy transfer (and therefore pressure measurement) will be small, and the direction change minimal.

In general, if the particles are moving one direction

From the side: Open a value to a high pressure gas chamber, and the gas at the nozzle will quickly no longer be inhibited when traveling that direction and will travel with all the kinetic energy that it has in that direction until it collides with something outside the chamber. Put a long nozzle on the container and mount a pressure gauge prior to the valve and perpendicular to it, and you will find that, when the nozzle is closed, that there are particle collisions all around that pressure gauge's sensor from particles traveling into the region of the nozzle and then bouncing back into the chamber, but when the nozzle is opened, any particles that were previously colliding with the nozzle will no longer bounce back from the valve, and now the pressure gauge's sensor isn't seeing as many collisions and the pressure is observed to drop.

I may need correction, but I believe that this "side pressure" concept is generally referred to as static pressure, and this is the one that decreases as fluid velocity increases perpendicularly to the direction of measurement.

From the front: Put a pressure gauge in the direction of travel though, like putting on a nozzle that mounts a pressure gauge inline with it and then turns 90 degrees before the valve, and there will be less pressure drop from nozzle closed to nozzle open. The particles escaping through the valve have to take that 90 degree bend first and they'll slam into the pressure sensor, and then other particles will come behind them and slam into them, repeat, building up and keeping a localized area of high collisions (and therefore high pressure) at the 90 degree turn.

I think that this "in your face" pressure is called dynamic pressure, but now we need to get more precise. I think that dynamic pressure is a momentary "in your face" pressure, but pressure buildup due to incoming fluid flow, like the kind that will build up on the 90 degree bend in my example, or on the leading edge of an airfoil, or on anything else that is pointed in the direction of travel, is called stagnation pressure. These two are not exactly the same.

Does this help the concept?

I just can't wrap my head around why pressure decreases as velocity increases.

From a conservation of energy point of view, higher velocity means higher kinetic energy, and that energy has to come from somewhere. One place it can come from is the internal energy of the pressure.

One explanation for how wings generate lift is that the air above the wing is moving faster, which causes lower pressure, but that explanation is incomplete: the wing is exerting a force on the air, which means that the conservation of energy argument doesn't work. Bernoulli's principle allows us to infer a decrease in pressure from an increase in velocity only when the internal energy of the pressure is the only possible source of the increase in kinetic energy.

but when the finger blocks the hole, wouldn't that add extra pressure on the fluid?

When you put your finger on the opening, the water retains most of its pressure throughout the hose. So now when it exits the hose, its pressure decreases significantly, and its velocity increases.

For this to understand let us consider a room in place of a hose say of length $l$ in which a ball is bouncing up and down and colliding elastically with the ceiling and the floor continuously.

But what if we push the ball in the horizontal direction ?

If we give it a appreciable horizontal speed , it will rarely strike both the walls before coming out of the room and hence we can conclude that the pressure on the ceiling and the floor has decreased with increase in kinetic energy.

Now since you considered a hose , let's see what happens with it. When you decrease the opening, water being incompressible must speed up so that volume of water coming in equals volume going out. This will add extra pressure on the water molecules but in the oposite direction of flow and from Newton's third law, the force and thus pressure by water on your hand will increase .

But the pressure on the side walls of the hose will decrease for the same reasons given in the first example.

So it is better to define which pressure is being considered before applying Bernoulli's Principle to get a better physical understanding of it.

Hope it helps a little 🙂.

Not the answer you're looking for? Browse other questions tagged fluid-dynamics pressure velocity aerodynamics bernoulli-equation or ask your own question.