I think of a relativistic conformal field theory as basically any theory which does not have a length scale. Say all particles are massless and all couplings are dimensionless. (I could really talk about scale invariance but I'm more used to talk about conformal).

Now I want to break conformal symmetry by introducing a length scale. Say one of the particles gets a mass. It seems to me that such breaking can not ever be considered to be small or big, just because there is no other scale to compare it to. However it seems that both at very low and very high energies the theory should be approximately conformal again. In the example above at very low energies the massive field effectively decouples while at very high energies it becomes nearly massless. So the two types of theories that we get (at low and high energies) are different.

I guess I do not have a very specific question but I would like just to understand this type of situation better. Some things that come to mind

I'm not certain what exactly you're looking for with your first bullet, but I'll address the second bullet by looking a an exactly-solvable model with a nontrivial RG flow which can be determined just by looking directly at correlation functions rather than deriving beta functions. It's the large-$N$ limit of $\phi^4$ theory: $$ \mathcal{S} = \int d^dx \,\left[ \frac{1}{2} \left( \partial_{\mu} \phi_{\alpha} \right)^2 + \frac{\lambda}{2N} \left( \phi^2_{\alpha} - N m^2 \right)^2 \right]. $$ Here I'm using slightly different notation to facilitate a large-$N$ expansion, but by multiplying out the last term you get the usual $\phi^4$ theory with some factors of $N$ and $m^2$ placed differently than you're used to (and an unimportant constant). For $2 < d < 4$, the RG flow of this theory is known to look like the following (picture credit https://arxiv.org/abs/1811.03182): 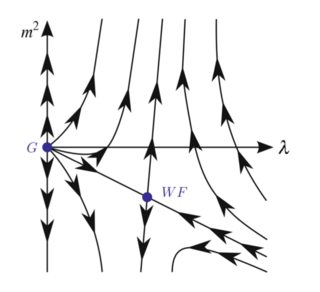 The flows to $m^2 = \pm \infty$ describe a flow to a gapped theory where all correlation functions decay exponentially at long distances, so they're not quite as interesting as the line connecting the free massless theory $G$ to the massless Wilson-Fisher fixed point $WF$. We will see that although all correlation functions will be algebraic at both large- and small- distances, there is a crossover of critical exponents between the two asymptotic cases. The constant $\lambda$, which has units of $\mathrm{(energy)}^{4-d}$, will play an essential role here.

Not the answer you're looking for? Browse other questions tagged renormalization conformal-field-theory symmetry-breaking or ask your own question.